"People working in games, to create such a key piece of culture, deserve so much better"

Exploring the highs and lows of the gaming industry through romance, epic space battles and nuanced discussions on misogyny, racism, doxxing and toxicity online, Don’t Read the Comments, a new YA novel from Eric Smith, is a must-read for gamers and non-gamers alike.

We were so excited to get to chat to Eric all about Don’t Read the Comments and ask him a few questions on writing, gaming and future projects.

For someone just discovering Don’t Read the Comments, how would you pitch it to them in just three words?

Despite the gaming industry being so huge, it’s not something that’s often featured in YA. What inspired you to explore it in Don’t Read the Comments?

Well, that’s certainly one of the reasons! I loved books like Guy in Real Life by Steve Breznoff and The Leveller by Julia Durango, and whenever gaming comes into play, those books quickly become far more relatable for someone like me. But unlike some of the bigger sci-fi video game books, I really wanted something a bit more grounded in now, and what’s going on in the gaming and online communities today. And while a game like Reclaim the Sun doesn’t quiiiite exist yet, it’s not terribly far off.

I also really wanted to dig into the toxic nature of the space, while at the same time, showcasing the good in there.

Don’t Read the Comments is told through alternating perspective between Aaron and Divya. Did you find you had a specific perspective you enjoyed writing the most or one you found more challenging?

Oh, that’s so hard! I definitely found Divya’s the most challenging… but I genuinely enjoyed writing both of them so much, for different reasons. Divya, because she was challenging, and because she reflected a lot of what I’ve seen so many friends of mine experience. And Aaron, because there’s so much of me in his character. A lot of what he does, reflects me as a teenager. Particularly the parts where he scours for junk computers in neighbours’ trash and flea markets.

As well as being an author yourself, you’re also a literary agent. Do you think this affects your writing and the way you approach it and if so, in what way?

Hah! Yeah, this is true. I do sometimes find myself trying to push the agent side of my mind out of the way when I want to write. Because the business side of things is often trying to talk to me about ideas that feel marketable, or what editor might like this or that. While it is important for writers to know a bit about what’s on bookshelves, I firmly believe in writing what you care about. Telling the story you have to tell, and shrugging off the market and trend speak.

Do you have any advice for aspiring authors who, like yourself, have other large commitments to balance alongside writing, such as a job or studying?

Just make sure you carve out the time, and that you’re protective of it. Sometimes that means you’re just out writing once a week, which tends to be my approach, or maybe you’re waking up a little earlier than usual, which several authors I work with do. Scope out the 5AM writing club hashtag on social media someday. There are a lot of us out there, carving out the time.

And speaking of time… take your time. I know it can feel like you have to get something written by X age, but remember, you don’t have to set those kind of deadlines for yourself. Tell your story, and don’t rush it.

Oh, most definitely. It’s been unfolding on social media for years. I started writing Don’t Read the Comments about two years after the big explosion surrounding all of that in 2014. I would love to say it’s getting better, I really would. But in my agent life, I’m lucky enough to work with some wildly talented writers in the gaming industry, and they still get harassed regularly on digital platforms. I really hope it gets better, people working in games, to create such a key piece of culture, deserve so much better.

We loved that Rebekah had a Bookstagram account! What style of photo do you think she’d take of Don’t Read the Comments ?

Thank you! I think she’s definitely someone who would subscribe to a Lootcrate, and would have plenty of fun nerdy trinkets around. I imagine she’d pose the book with some Pop! figures, and considering she’s a fan of writers like Kate Leth and Delilah S. Dawson, I think we’d see it with some Adventure Time figures, a Phasma figure from Star Wars… plenty of geeky icons and a pixelated background.

Tomorrow is the day. A book I wrote about digital connections during a time when I was away from so many of the people I loved most, will be out in the world. And it feels only right that a novel that’s so much about close friends, is dedicated to my best friends @darleneandrea @nenagrey and a sweet little kid. Looking forward to seeing lots of friends out on the road starting tomorrow! Thanks for being there, all of you. ❤️

Through Divya and Aaron’s exploration of the VR game, Reclaim the Sun, there were passages that felt so immersive, they almost dipped into being sci-fi. Was this a conscious decision or something that came naturally with writing?

Oh my goodness, thank you so much! It was definitely a conscious decision, and actually had to be dialled back a bit! In the original draft, sometimes it dove a little too far into the game where it started to feel too science fiction, when really, it’s supposed to just be a contemporary story that happens to have an advanced new game in it. Originally the characters could do a lot more in the VR landscape, but my editor wisely had me pull back there, to keep it grounded.

Do you still think about Divya and Aaron and if so, what do you think life has been like for them since the book ended?

All the time. I’m actually toying around with having them make a cameo in another YA contemporary I’m working on, because I miss them so much. Without giving anything away about how the books ends, I do like to think they’ve both started college, if that feels right for them, or that Aaron is working on making video games in his down time. Maybe applying for internships or writing gigs.

Basically, they are chasing after their dreams. Which is honestly what I want for everyone.

If you could explore Reclaim the Sun with anyone, whether they be dead or alive, famous, fictional or someone you know in real life, who would you choose and why?

Oh wow, if I could play the actual game?!

For what would inevitably a wildly hilarious time, maybe Conan O’Brien? Have you ever seen the videos of him trying to play video games with celebrities and/or developers of said games? Clueless Gamer? It is an absolute joy watching him bumble about. The Final Fantasy one is particularly fantastic.

And if it had to be with someone I actually know who would genuinely enjoy it, maybe Farah Naz Rishi? She wrote I Hope You Get This Message, which came out last year, which is also a YA contemporary novel with a little splash of sci-fi (aliens!). She’s a huge gamer and a YA author. Bonus. Also if you haven’t read that book, pick it up! It was one of my favourites of 2019.

Are you currently working on anything and if so, can you give us a little hint as to what we might expect?

I am! There are a few fun projects in the works that are coming soon, notably Battle of the Bands, an anthology I co-edited with my good friend Lauren Gibaldi. It’s a collection of short stories from a bundle of wonderful authors, that tell the story of a single high school’s battle of the bands night, from the perspective of 15 different characters. It’ll be out in the world in 2021.
I also have an essay in Kelly Jensen’s upcoming Body Talk anthology, which comes out later this year, in August.

Thanks so much for having me! 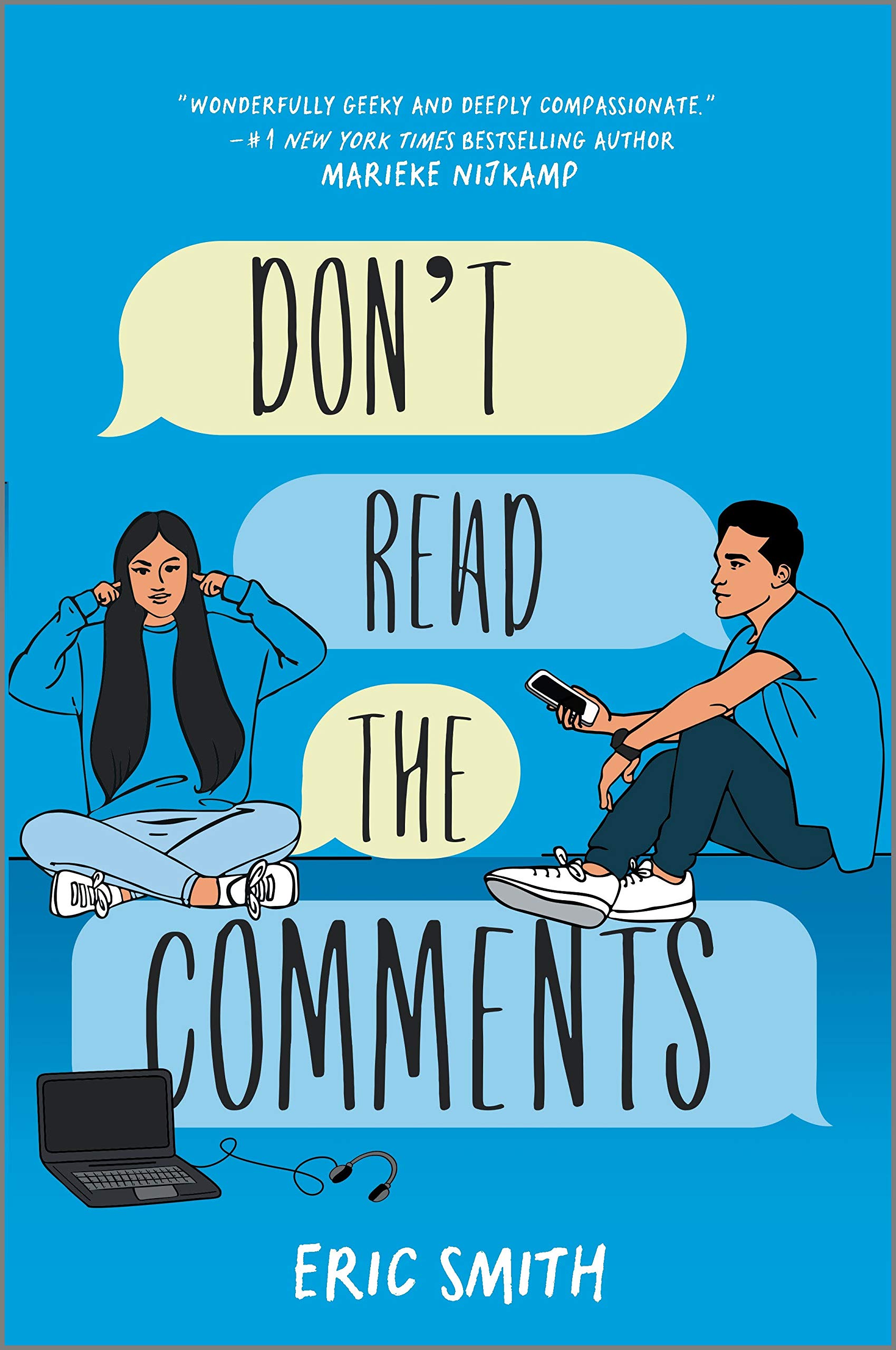 Get your copy of Don’t Read the Comments by Eric Smith here.