Small town meets big city love in Emily Henry’s new delightfully bookish rivals-to-lovers romance, Book Lovers. Once again, Emily has totally knocked it out of the park with this utterly swoon-worthy rom-com and to celebrate its release, we had the honour of chatting with the rom-com queen herself about all things tropes, upcoming projects and, of course, Book Lovers.

Hi Emily! It’s such an honour to get to chat to you today about your new and utterly swoon worthy rom-com, Book Lovers! For readers wanting to know more, do you have a elevator pitch you could share with us?

Oh, thank you so much! And yes—Book Lovers is about uptight, workaholic literary agent Nora Stephens, who’s just been dumped for the fourth time for a woman who’s her polar opposite. She’s convinced she’s destined to always be the villain of someone else’s destined love story, but her younger sister Libby thinks Nora just needs to get out of the city and have her own transformative small-town love story. So the two take an extended trip to a small mountain town—only while they’re there, Nora keeps bumping into her nemesis from back in the city, editor Charlie Lastra.

Having recently devoured and adored Book Lovers, I’d love to hear a little about the inspirations behind the story and its characters?

It really started with my watching a lot of made-for-TV holiday movies. I love those so much, but there is one particular trope that pops up a lot, which is that big-city exec needs to step outside of their bubble to find the true meaning of the holidays and life in general.

Like I said, I love these movies, but when there are so many of them, it’s easy to wonder what this trope says about how we view women, and specifically what makes one “good” or “worthy of love.” So I wanted to play with this premise I love so much, but try to put a different spin on it, and really question why we seem to equate a certain kind of lifestyle with a superiority of morality or purpose.

Each of your three released novels have been rom-coms. What is it about this genre that keeps pulling you back to write more? (we’re all very thankful it does!)

I think it’s the same thing that pulls me back, as a reader, to the genre again and again: It’s a way to explore tough real-world subjects but within the confines of a genre that feels safe and cozy. There’s an innate optimism to the romance genre that I really want to fill myself up with. It’s so easy to be a cynic and a pessimist, but ultimately, I do think that love makes up for a lot of the hardest and cruelest pieces of reality. It can make the pain feel like a worthy price to pay for the joy of getting to be alive on this planet, loving and being loved.

Oh, gosh. One of (if not my very) first virtual events for Beach Read was an Instagram live where I immediately spilled a full glass of wine in my lap (offscreen) and then had to just kind of get through the event while drenched. I was so embarrassed and when I told some of my friends, they just said that was very appropriate for a rom-com author. So while in real life I think it’s more frustrating than charming, I actually am fairly clumsy and chaotic in the way of a lot of the earlier rom-com books I used to read and love, though I think that trope has phased out a bit.

Speaking of tropes, do you have a favourite or one you hope you take on in future works?

I love tropes. I think they show up again and again because they’re so relatable. Because they actually do happy. I even have a friend who took a platonic trip with another friend, and late into the trip they wound up getting the last room in a hotel, and it had only one bed. It did not result in true love, but did spawn some hilarious stories, and I think that’s how tropes come to be.

I, like a lot of people, love a good enemies-to-lovers, though I think I’m fairly picky about them. In historical romance, I love a marriage of convenience. I’m sure my books will continue to play with tropes, and I have more than one take on fake-dating in mind for future stories, so we’ll see!

All three of your novels feature equally gorgeous couples but if they were all to find themselves at the same party, how do you think they’d get on?

Ha! I think about this a lot! I think Poppy and January would be good friends. I think they would both be scared of and a bit put off by Nora, but I also think Poppy would admire her from afar, just because they’re so different. I think Gus would love Poppy and think she was adorable, if a little bit annoying, and I think he would not understand Alex whatsoever. He’d likely think Alex was boring or rude, until they got to know each other a little bit. Charlie would be polite to everyone, but not super interested in anyone except Nora. He would like talking shop with Gus, and I think at parties, they might end up in the corner hanging out for a bit until Charlie found a way to leave. And Charlie actually knows January, though you’ll have to read with an eagle eye to see how!

Finally, for those of us already desperate for our next Emily Henry read, do you currently have any projects in the works and if so, is there anything you can tell us about it?

I do have projects in the works, but I can’t talk about them yet, except to say, I am continuing to write for the same audience as I have for my last three books, and I hope you’ll love these new characters like I do! 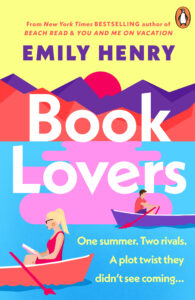 Get your copy of Book Lovers by Emily Henry here.