Crystal Frasier and Val Wise on their YA graphic novel, Cheer Up: Love and Pompoms

"The most vital thing to me when designing a character is that they feel real."

Beautifully illustrated, bright and uplifting, Crystal Frasier and Val Wises’ inclusive new YA graphic novel, Cheer Up: Love and Pompoms, is a queer cheer must read and we’re so excited to have had the chance to talk to both creators all about it.

Hi Crystal, Hi Val, it’s so lovely to get to chat to you today about your new adorable new YA graphic novel, Cheer Up: Love and Pompoms! For those who may not be familiar with its premise, how would you describe using just three words each?

What were your inspirations behind Cheer Up? Where did Bebe and Annie’s story originate?

CRYSTAL: The basic story was just a random thought I had on a very long escalator ride I had at a con, where I thought about how great it would be to have an uplifting story about queer kids falling in love on the cheerleading squad. The idea stuck with me for a while and I ended up writing down some notes for it, but didn’t know what to do with it until Ari Yarwood over at Oni asked me to send her some YA slice-of-life pitches. I dusted the idea off and gave it some more thought and developed it into a story about estranged friends meeting again and learning to grow as people from one another.

Val, how did you decide upon the colour pallets, character styles etc. for Cheer Up?

VAL: While Crystal was writing the script, we worked together on putting together concept art or characters, backgrounds, etc., so we had a lot of time to figure out how we wanted the book to look. I had done pretty much only black&white comics before Cheer Up, so I needed to figure out how to change and simplify my inking style to better compliment colors. The palettes themselves were chosen mostly out of necessity – I wanted to be sure they would translate well from my computer screen to print. That means a lot of pastels, and keeping my palettes limited (even in scenes with realistic color). Pretty much everything I knew about coloring comics before this book I owe to my former professor Kit Seaton. If I hadn’t had her digital coloring class before working on Cheer Up, I would have been totally lost.

Can you tell us a little about the process behind the creation of a graphic novel, from writing to illustrating to publishing?

CRYSTAL: It involves a lot of those little shoemaker elves. Seriously, though, it works a lot like pitching other books, but with the added art steps. A creator pitches an idea to a publisher—usually with an outline and some character sketches or sample pages of either script or art—and the publisher usually gives a thumbs down or thumbs up along with feedback about any changes they want. The artist starts work on more concept sketches while the writer makes a mor detailed outline, then the scriptwriting begins. Once the script is done, it gets handed over to the artist who sketches out page layouts, then makes full-sized sketches, inks them, and colors them. The art and script go to a letterer who creates the word balloons and sound effects to help the story flow organically without distracting from the art. Then everything goes to the publisher who adds credits, runs last-minute edits, and organizes the files for the printer. THEN it goes to the elves.

VAL: Crystal pretty much summed everything up! On my end, I did all 120 thumbnails, then moved on to all 120 page sketches, then inks, etc. Since working on Cheer Up, I’ve illustrated a book where I worked in 15 page batches (from thumbnails to inks before moving on to the next batch), and there’s pros and cons behind both methods. It was easier to keep the style consistent in Cheer Up, but sometimes it can be frustrating to go back and color pages you inked months ago, now that your art has improved enough to see its flaws!

It was so wonderfully refreshing to see a graphic novel cast so diverse in terms of race, sexuality, gender and body size. I could tell this was something you were both passionate about?

CRYSTAL: All the credit for that diversity goes to Val. I wanted dichotomy between Bebe and Annie’s builds and for Bebe to be Hispanic, but Val took that and ran with it, giving us that beautifully diverse cheer squad and school setting.

VAL: I first want to say – while I appreciate that people like my character designs for this book, I’m not really comfortable accepting praise for drawing different people and different bodies – it should be expected of comic artists already. The most vital thing to me when designing a character is that they feel real. Especially for white creators like myself, I think if you design a cast with your only intention being “diversity”, with no care and consideration for the characters as people, you’re already making a mistake, you’re already dehumanizing your cast. When designing the cheer squad in particular, I wanted to have a good idea of their personalities and interests, even if they don’t feature as much in the comic itself. I don’t want the characters I draw to feel like strangers to me, or to the reader. It’s not my place to say whether or not I was successful, but that’s my thought process at least! Also – body size (in particular depicting fat characters) is very important to me. I honestly regret that I didn’t push any further with my designs for this book.

Do you ever find yourself thinking about Bebe and Annie and if so, what do you think they’d be up to right now?

CRYSTAL: You don’t spend a year or more building people’s lives and then NOT think about them. They’re both in Florida, so I imagine right now they’re worrying a lot about how to keep themselves and their families safe in the midst of this pandemic.

VAL: Like Crystal said, having a cast of characters in Florida is unfortunately going to carry a lot of baggage. Things are scary for a huge number of reasons in our home state, but I like to imagine the squad gets together for monthly horror movie marathon streams, just to goof off and take their minds off of things for a little while.

CRYSTAL: Oh my yes. Bebe isn’t a 1-for-1 autobiography, but I dumped a lot of my personal anxieties into Bebe, especially the ones I have when I was first transitioning back in school. And a lot of her father’s growth mirrors my dad’s coming to terms with me. And I put a lot of my later misanthropy into Annie—her general distrust of the world was a survival trait I developed and eventually had to learn to outgrow once it started doing more harm than good, the same way Annie does.

VAL: I was pretty much a way less cool version of Annie when I was in high school. I see a lot of my younger self in her abrasiveness, as well as her deep vulnerability behind it. And of course — her love of coffee and bad music.

Do you have any recommendations for readers looking for more YA graphic novels after loving Cheer Up?

CRYSTAL: I will always sing the praises of Lilah Sturges’s Girl Haven (also from Oni); it’s a sweet coming-of-age story set against a wonderfully creative fantasy world and I hope to see more from all the characters involved. And both Lumberjanes and The Backstagers are beautiful, queer-friendly series that focus on friendship and supernatural weirdness.

Finally, I have to ask, were either of you cheerleaders growing up?

CRYSTAL: Someone finally asked! No, I was not, but mostly because I was very goth in high school and the idea of being cheerful seemed nauseating at the time. But I had several friends on the cheer squad who were amazing people, and I always had a hard time reconciling the cheerleaders on TV—who were all mean, preppy girls—with the weird, nerdy, diverse team of cheerleaders we had at my school.

VAL: Oh, extremely no, haha. I was a theatre kid (surprising no one), but my school was so small that there was some overlap between the drama club and the cheer squad! 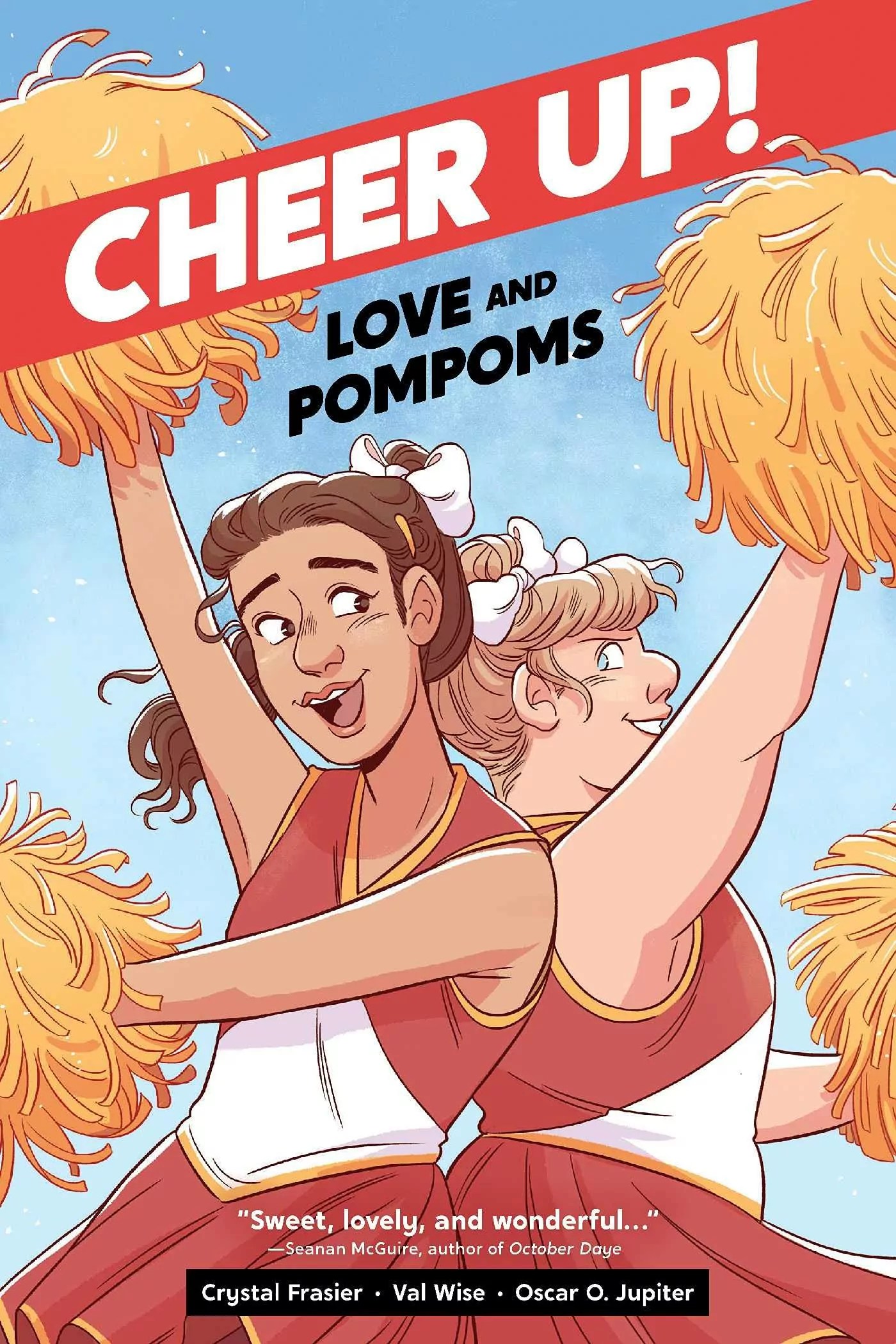 Get your copy of Cheer Up: Love and Pompoms by Crystal Frasier and Val Wise here.