Aston Merrygold is on the road with The Masked Singer

Do you enjoy the TV show The Masked Singer? Well now you can go and see it live in an arena if you’re in the UK!

The Masked Singer is touring! Yes, you heard that right! The hugely popular TV show that airs on ITV is touring around arenas in the UK. The arena show is played out exactly as you would see it on the TV – with a host and three judges. That is where Aston Merrygold, one fourth of JLS, steps into the picture.

Aston is taking part in the arena shows as a judge, alongside radio presenter Denise Van Outen and a local guest judge in every city. The show is hosted by Joel Dommett, who also hosts the TV version of the show.

A string of singers will take to the stage with their masks on, obviously. The aim of the show is the same as TV, you have to guess who is beneath the mask and every show a new person should be unmasked.

Aston actually took part in the show last year, coming in third place. He was known as Robin and dropped clues every week to keep the judges and viewers guessing. You can watch one of his performances above.

This isn’t the first time Aston has judged, all the way back in 2013 he was a series judge on Got To Dance on Sky One. He was joined alongside Diversity’s Ashley Banjo and the Pussycat Doll’s Kimberely Wyatt. 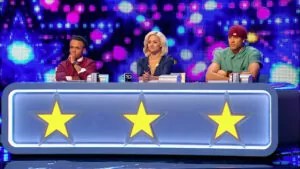 If you’re interested in attending the tour, you can purchase tickets here. It looks like a lot of great fun!

Sajni Patel on her new YA rom-com, My Sister’s Big Fat Indian Wedding