Yasmin Rahman on what she learnt writing her second novel, This is My Truth

"I write books to help people feel seen, to help them realise they’re not alone, that things can get better."

This post was written by Yasmin Rahman, author of This is My Truth

My debut novel, All The Things We Never Said, published in 2019. My follow up, This is My Truth, published just last week, over two years later. At first, I was terrified by the long gap between books, worried that I would have to do the work to establish myself as an author all over again, that people would “forget” me, but that gap turned out to be for the best. It gave me time to figure out what kind of writer I am, what kind of books I wanted to write, and to just get used to being in publishing.

Though I struggled A LOT, it really was a transformative period. One I’d like to talk about. So here are some things I learnt while writing that pesky second book.

1. There is life after the Debut Novel

Like most writers, getting a book published had been my dream for most of my life. The lead up to it was super amazing, all the buzz, all the excitement. But then the book was out there, and time kept moving. I realised that…this wasn’t the end. There needed to be a next book, and another, and another. It may seem weird, but it was such a jarring realisation. It was like achieving your biggest dream and not knowing what to do after you’ve got there. Of course with writing it’s easy enough to know that the next thing is…the next book, but I do think the industry itself puts a LOT of importance on debuting. But the knowledge that there is life after the first book can be super freeing. Knowing that your whole worth is not tied up in that one book. There are so many authors who wrote lots of books before becoming bestsellers. Writing truly is a marathon, not a sprint.

2. Book twos are hard for EVERYONE

I had heard the saying that Book 2s were the WORST around the writing circles, but I had always thought it was people overexaggerating.

Friends, it was not over exaggeration.

Every single writer I know has struggled with their second book. Part of the reason for the gap between my books was because of how much I was struggling. The initial draft I wrote of This is my Truth was rejected by my publisher, which, at the time, truly knocked me sideways. But I’m lucky enough to have a wonderful editor who wanted another book frome me. She helped me tease out the best parts from that draft and turn it into what it is now. I think for me, the struggle was mostly the whole “following up” business. All the self-doubt that creeps in. Did I even have a second book in me? Was I just a one hit wonder? Is this the moment everyone realises I’m a fraud? The mental toll writing a second book brings is a huge struggle (slightly first world problems, I know), but it really does help having a supportive group of writer friends, especially ones who have been through, or are going through the whole book 2 hooplah.

3. You won’t love your books equally, and that’s okay.

I had wanted to write All The Things We Never Said for years. It was my passion project. The book I wished had existed when I was a teenager. I was extremely proud of it. And so, of course, like Asian mothers do with their own children, I couldn’t help but constantly compare Book 2 to Book 1. I wanted it to be better, because, isn’t that how a career is supposed to go? You’re supposed to get better, not worse, or stay the same. But with the struggles I had finding the bones of this story, I started to think that it was awful compared to Book 1. People would come looking for a book similar to All The Things, and when they found this book was so different, they would hate it, boycott me, call for my beheading. As I mentioned, book 1 was my years long passion project. Anything was going to pale in comparison. And pale it did. Honestly, it wasn’t until my sensitivity reader, Mariyam, read the manuscript and gave me her feedback, that I started to feel better about This is my Truth. While I thought it was too quiet, and that there was no plot, Mariyam felt seen. She saw her truth reflected in the book and felt comforted by it. And that, I realised, was the most important thing.

I write books to help people feel seen, to help them realise they’re not alone, that things can get better. And if this book can do that, then it’s just as worthy as the book of my heart. Even if I don’t love it completely and wholly, I’m still proud of it.

Back on the topic of Book 1 being the book of my heart. I realised that I was constantly wearing rose tinted glasses when I thought of the process of writing All The Things We Never Said. In my memory, the words flowed easily, the emotions poured out, and the only tears from me were at how great it was.

Timehop showed me that was not the case.

Timehop is an app that shows your social media posts on this day from a year, two years ago etc. And as someone who LIVES on twitter, this has been an eye opener as to how the process of writing book 1 actually was. There were so many tweets from years ago about how much I hated writing All The Things. About how much I was struggling with it. I found old emails to my tutor telling her I wanted to stop writing the book because I wasn’t very passionate about it. Yes, you heard right. That book I keep calling the book of my heart? At one point, I actually said the words “I’ve never really been passionate about this idea”.

That email in particular was such a saving grace when I was deep in the pit of hating Book 2. Just remembering that the process actually hasn’t changed that much. That I had been through exactly the same thing before and made it out with a book I loved. If it had happened before, it could happen again.

The biggest transformation I had when writing This is my Truth is learning what kind of writer I am, as opposed to who I think I am, or who I think I’m expected to be. Bit of a confusing one, I know.

I used to think of myself as a plotty writer. I love books with big plots, with twists and turns and levels upon levels of plot. In my head, All The Things We Never Said, with its three POVs and menacing website, was a plotty book. And so I wanted to carry that on. My initial idea for This is my Truth was the story as it exists now, but with an extra plot of grooming on top, and another of sexual assault, and then as a cherry on top, discourse about fandom. There was a lot going on. And I liked that at the time. But when my editor pointed out that the true strength to the draft was the characters, as she (and other reviewers) had said repeatedly about book 1, I realised maybe she was right. I did enjoy writing the characters the most, liked exploring their emotions the most. So maybe rather than focusing on making something super plotty to try and capture the audience, I should realise that characters are what matter most.

When I initially stripped back the story, it felt horrible. So bare boned. But the emotion rang through. And also I had gotten to a point of resignation that this was just going to be a quiet book, but the NEXT ONE could be super plotty! But as time went on, I realised that This is my Truth really highlighted my strengths as a writer. And after much consoling from writing friends, I realised that the obsession with plot was just in my head. I’ve just finished my first draft of Book 3, and I naturally went on the quieter side again for this one. But as with Book 2, I noticed that the emotions shone, which is the most important thing, I think. Either way, I feel a bit more comfortable with it, writing as I do naturally, rather than trying to throw in plot just because I think readers might get bored.

I was in a privileged position in that I came into the publishing sphere with two writing MAs under my belt, but I think this two year period, the experience of writing Book 2, has brought me into my proper seat as a writer. I feel more comfortable now, both about the books I write, and the way I see them. I’m probably jinxing it all by writing this post, but I have hope for the future. More than that, I’m super excited to write more stories. 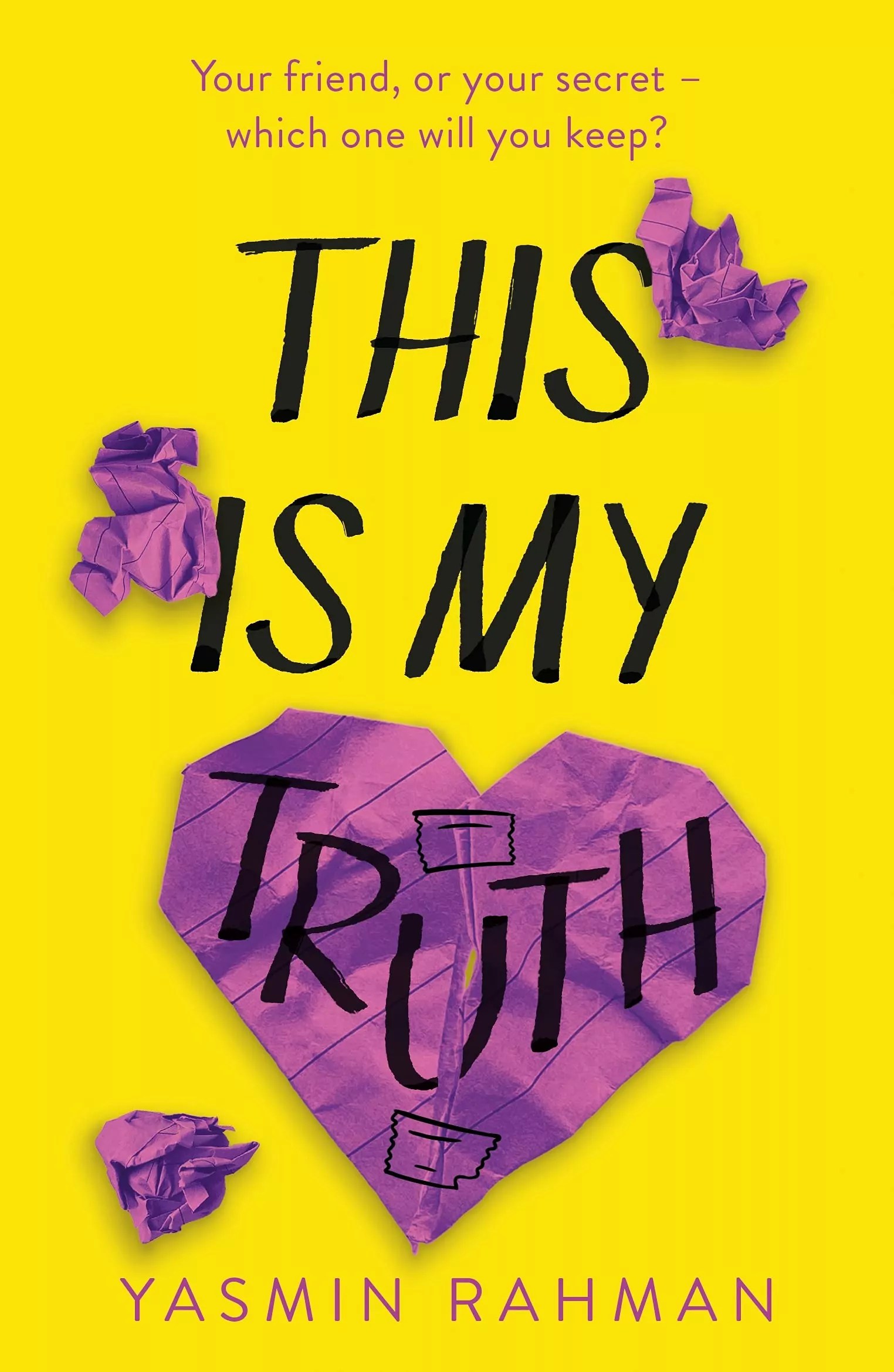 Get your copy of This is My Truth by Yasmin Rahman here.