This post was written by Tracy Darnton, author of Ready or Not.

My latest thriller, Ready or Not, is out in May. Set at a beautiful holiday home in Cornwall, teenager Kat goes missing during a late-night game of hide-and-seek. A set of three families have gone away together since forever but lately tensions threaten to spoil everything. The story is told through the eyes of Kat’s best friend Millie, the youngest of the group and the most naïve. When she arranges a return to Creek House one year on for the remaining teens, secrets begin to be revealed. It’s a tale of obsession, privilege and plenty of games.

I’m not going to give any spoilers for Ready or Not, but it’s fair to say that Millie doesn’t always put two and two together in the same way as the reader would. She’s innocent of the realities of the crumbling relationships in the build up to Kat’s disappearance. So, I thought I’d chat a little about unreliable narrators and why I love them in books and films.

But firstly, aren’t we all unreliable narrators? Everything we tell about the past passes through our own filters. After all, that’s the way our memory functions; casting our own role and comments in a much better light than other people’s. That argument you had with your sibling – you’re more likely to remember yourself as the wounded party. I enjoyed exploring this and other aspects of the nature of memory in The Truth About Lies. Through our own prism, we define ourselves as the goodie not the baddie – so yes, we’re all unreliable narrators. And on a daily basis we’re reading between the lines of whatever anyone tells us.

Why are they used so often in fiction? Mainly because an unreliable narrator gives us a beautifully complex character. What you see is NOT what you get. All those clues and subtext are ripe for the picking. An immediate tension arises from wondering what’s concealed and the plot has instant layers and depth. The reader or viewer has the pleasure of sorting the truth from the lies or misconceptions. If the narrator is a young child, or sees the world in a particular way like in Mark Haddon’s The CuriousIncident of the Dog in the Night-time, the reader can reinterpret and decode their narrative.

Finally, an unreliable narrator often leads us to my favourite kind of twisty ending. In my last book, The Rules, Amber is not wholly reliable about what happened with her father and her relationship with his strict set of prepping rules – which leads to a fiery and unexpected ending.

Unreliable narrators don’t have to be out-and-out evil, or clinically insane like in Dennis Lehane’s Shutter Island for it to work. Yes, they could be deliberately lying to cover their tracks in committing a crime but equally they could be innocently or naively unreliable in the things they show and the information they omit. Arguably, we find that easier to empathise with and connect to as a reader.

In Daphne Du Maurier’s Rebecca, the new Mrs de Winter wrongly assumes her predecessor was incomparably wonderful. Clouded by jealousy, she perceives all the clues to Rebecca’s character and death in that way. She’s innocently unreliable.

A touch of amnesia means we expect the narrator to be unreliable – they’re incapable of providing a true version of events initially. They’re piecing together what happened along with the reader. Cadence Sinclair in We Were Liars is a delicious example of this – and there’s a real pleasure in spotting all the clues author E. Lockhart has dotted through the book on a re-read.

To make the twisty ending satisfying, those clues MUST be there so that it’s like a switch has been flicked when the twist is finally revealed. Aha – now it all adds up! A montage at the end of The Sixth Sense movie neatly shows us where Bruce Willis/Dr Malcolm Crowe’s perception of events was wrong; if only we’d been paying attention we’d have spotted the truth.

I’m always intrigued by the unreliable narrators whose version of the story is part of a defence mechanism, who may not be aware that they are twisting the truth. These are psychologically interesting characters – Pi in Yann Martel’s The Life of Pi tells us a fable of his time with the tiger in the life raft because the actual story is too traumatic. He embellishes the tale. Or Lola’s ultimate recollection of events in Kat Ellis’s Harrow Lake reveals more of what happened to film director Nolan Nox.

As for whether in Ready or Not I’ve written Millie as an unreliable narrator beyond her general naivety… that would be telling. Read it and see. 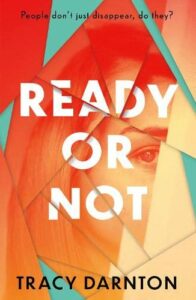 Get your copy of Ready or Not by Tracy Darnton here.