Leah Johnson on rom-coms, black queer representation and You Should See Me in a Crown

"It’s always been my goal to write into spaces in the genre that were largely empty when I was growing up."

If you haven’t already readYou Should See Me in a Crown, the gorgeous debut novel by Leah Johnson, stop what you’re doing right now and start reading. Following Black, queer teen, Liz Lighty, as she sets out to become prom queen in order to win a cash prize that will get her into her dream college, You Should See Me in a Crown superbly subverts classic rom-com tropes in a way that’s sincere, squee worthy, funny and honest.

You Should See Me in a Crown is truly the YA rom-com to answer all your rom-com dreams and we were lucky enough to have the chance to chat to Leah all about it.

Firstly, a huge congratulations is in order on the incredibly exciting release of your debut, You Should See Me in a Crown! How does it feel to, have your debut novel out in the world?

The past month has been such a whirlwind, I’m not sure I have the language yet to articulate what all of this has felt like. It’s been a real joy and honor to watch You Should See Me in a Crown resonate with readers in the way it has.

Liz’s story is such an inspirational read and one that has already and will undoubtedly continue to inspire countless readers but what was your biggest inspiration behind writing it?

I was heavily inspired by queering the quintessential John Hughesian image of the “all-American” high school experience, and past that, the all-American girl. If the stereotypical prom queen is white, popular, and “perfect” then in this book I wanted to put a girl in serious contention for the crown who is Black, hopelessly awkward and deeply anxious. And she’s still going to be worthy of it all.

You Should See Me in a Crown brilliantly turned multiple classic rom-com tropes on their head. Was there a specific trope you enjoy playing around with the most?

You Should See Me in a Crown exists largely to subvert all of the ideas I was fed through so many of my favorite books growing up about who is worthy of being treated like a queen, who deserves to get the crown and the girl and the happy ending. It’s always been my goal to write into spaces in the genre that were largely empty when I was growing up.

I didn’t come out until my adulthood—didn’t even see a future in which being anything other than straight was an option—but I can only imagine what permission could have been granted to me and so many other kids if we’d seen more varied representation on shelves. If books show us what is and can be possible, then we need a wide array of stories to offer readers mirrors. I want the mirrors my books offer to reflect the totality of what complicated, beautiful, incredible, messy lives of possibility every kid deserves.

You Should See Me in a Crown perfectly balances important topics such as Liz’s identity as a bisexual black girl and illness, with the cutest romantic moments, music and so much more. How important was it for you to write a story that explores hardships but is also filled with joy?

Black folks, queer folks, black queer folks are constantly building tables of our own (and rebuilding them once white people attempt to co-opt them) because we’ve never been offered seats at America’s. Rebirth and reinvention are in our nature. But none of that can exist without resistance, which brings with it its own set of conflicts. So in taking this very American institution of prom—something that, at its core, is extremely white and heteronormative—and making an out-and-proud black girl with big hair its new face, I had to write through that duality of great joy and also great struggle.

Which is awkward, and uncomfortable, and downright painful at times. I mean, it shouldn’t be radical that a black, queer girl could win a prom queen title in 2020, but in more small towns across this country than I could count, it’s still practically unheard of. So if Liz was gonna pave the way, I wanted her to do it in a way that felt honest, but also, like, super gay.

The cast of characters you created in You Should See Me in a Crown were all so wonderful, with unique and strong individual voices but did you have a favourite character to write and create?

I loved writing the boys in the book! Robbie’s voice was so distinct to me from the very first draft, and exploring the relationship between him and Liz was such a joy. Jordan, bless his heart, just steals every scene he’s in for me. He’s such a sweet guy, who really wants to do right by the people he cares about even when he doesn’t quite know how or why to do that sometimes. They’re both so sweet and so funny and I love getting a chance to explore those elements, especially for Black boy characters.

You Should See Me in a Crown is the perfect rom-com! What are your top 3 rom-coms and which 3 rom-coms do you think Liz would class as her favourite?

Oh my goodness, this is such a good question! My top three rom-coms (in no particular order) are: Pretty Woman, 13 Going on 30 and Nick and Norah’s Infinite Playlist. Those favorites swap out all the time though, so that’s a really tough one. I would say that Liz isn’t a huge movie buff, but her favorite rom-com right now would probably be Love, Simon (which she has watched approximately 364 times and has cried during the Ferris wheel scene EVERY SINGLE ONE).

Now that You Should See Me in a Crown is out in the world, what is one piece of advice about writing and publishing you wish you’d been told before you started your journey?

My advice to my younger self is twofold: don’t be afraid to take up space and stop cracking jokes at your own expense just to keep other people from doing it first. You are worth every good thing. I think, in terms of aspiring authors, I’d change that only slightly to say: trust yourself and believe in the value of your work.

This is especially true for queer writers of color; don’t give in to the temptation to believe that anything someone is offering you is good just because it’s better than not getting offered anything at all. That type of gratitude is a trap. You earned everything you have, and I promise you a straight white man is demanding twice as much (energy, attention, money, whatever) as you. Stand in that knowledge.

What do you think the cast of You Should See Me in a Crown would be up to during quarantine?

Since Liz’s little brother is immunocompromised and she lives with her grandparents—both incredibly high risk groups—Liz is using social media to rail against all the people in the world who aren’t wearing masks and are refusing to social distance. She’s enlisting the help of Gabi to start a campaign on Campbell Confidential that encourages people to stay home. I think Jordan and Robbie are playing a lot of 2k together from their respective houses; Stone has been in a deep meditative state for the past four months; and Britt is listening to folklore on repeat (but pretending like she’s not) to cope with the fact that she can’t play rugby and has to do college remotely in the fall. But I can guarantee they’re all sheltering securely in place.

Because I adored the superb Avatar: The Last Airbender reference in You Should See Me in a Crown, I have to ask: which element do you think Liz, Mack and Jordan would be?

Oh wow, you’re really hitting me with the tough questions. I think Liz would be an earth bender because of how solid she is and her unwavering determination to ethical pursuit of her goals. Mack would be an air bender because she’s more go with the flow, but has an incredibly strong moral compass. And I’d say Jordan has some airbender in him as well—really dedicated to cultivating community with the people he loves, really interested in uplifting people who have been silenced or ignored. But they’ve all got a touch of water bender in them somewhere since they lead with their hearts.

Do you currently have any future projects in the works and if so, can you tell us a little more about that?

Right now, I’m supposed to be turning around edits on my next book, Rise to the Sun, which is due out in 2021. Rise to the Sun takes place over the course of a weekend at a music festival, and centers two girls named Toni and Olivia who meet and have to work together to complete a set of tasks during the three days they’re there. While things in the world are difficult to process, working on this book has been a spot of joy, and an excuse to return to one of my favorite places on earth: music festivals.
I have some other really cool projects in the works, but since this is publishing and it requires me to hold onto secrets for like seven million years before I can talk about them, that’s all I can say for now. 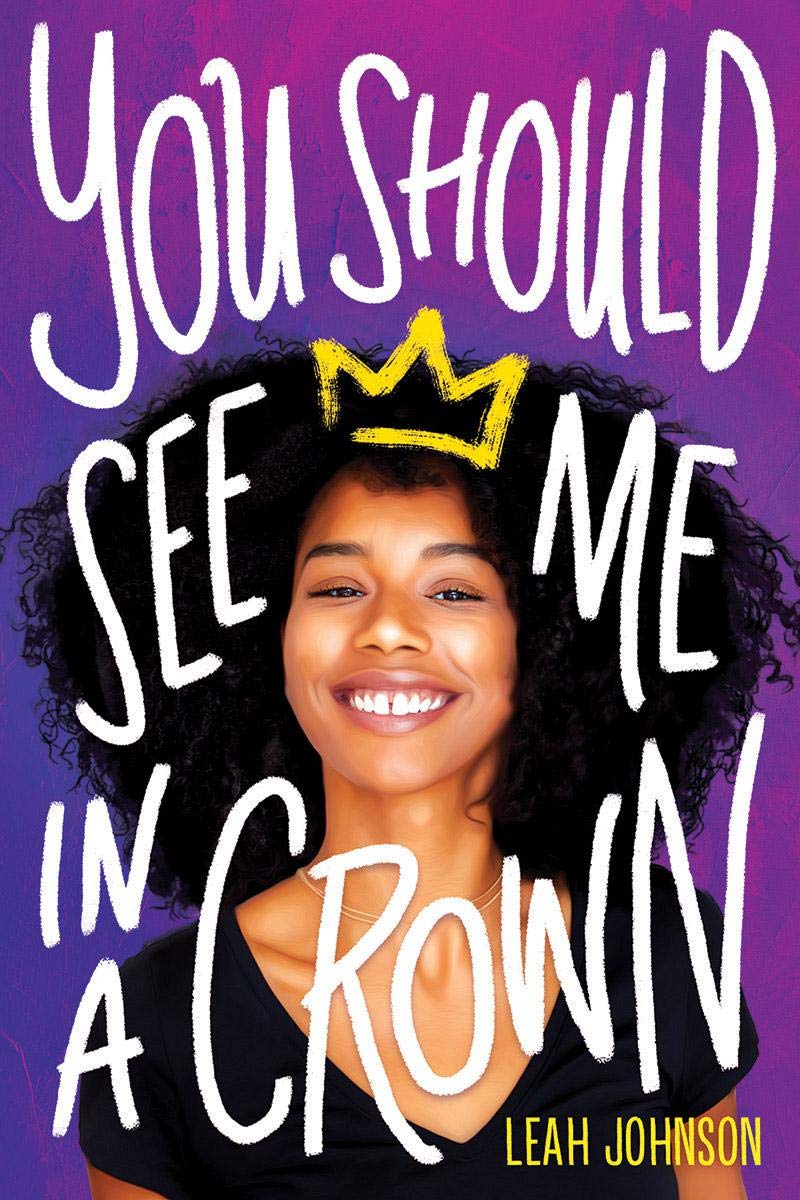 Get your copy of You Should See Me in a Crown by Leah Johnson today in the UK & US.