AhGaSe have renamed a galaxy to celebrate GOT7's 6th anniversary

Since their debut on 16 January 2014, GOT7 have shown the world they have the perfect formula to make it far and establish themselves as one of the best K-Pop groups in Asia and worldwide. Unique music style, strong rap line (the rap line can be in Korean, Mandarin, English, Japanese and Thai), dancing, vocals always on top, visuals and personality. Since their debut, GOT7 have also gained their loyal fans, iGOT7 (usually shortened to Korean AhGaSe, which means “baby bird”).

The members of GOT7 care deeply for iGOT7 and never fail to show this at every opportunity they have. This year, to celebrate GOT7’s 6th anniversary since their debut, AhGaSe decided to show the impact GOT7 has had on the world and how much they mean to their fans in a very special way, by acquiring and naming a galaxy for GOT7. The galaxy NGC 278 is now officially called Galaxy GOT7.

🐥There are no brighter stars in our sky than our GOT7.💚
Join us on Jan 15th 6pm KST let’s trend these tags:
#.GalaxyForGOT7
#.갓세븐이라는_은하수

“The project came to mind because of AhGaSe themselves. At first, we asked AhGaSe to send us messages for GOT7 in their native language with the English translation so that we could edit a video for GOT7 as an anniversary gift. When the messages started pouring in, we were literally in awe by the impact GOT7 has had on the world. After witnessing this phenomenon, the only thought that came to mind was a video message alone will never convey to the world the significant role GOT7 has played in the lives of people around the world. Even simply buying each member a star wasn’t enough. We wanted to make a statement to the world about GOT7 and the main idea that came to mind was to buy a galaxy so that they may continue to shine forever in the eyes and hearts of AhGaSe. They have done so much and they deserve so much more from us in return.” says @ot7agha

Galaxy GOT7 is located in the constellation Cassiopeia. Its coordinates on the celestial grid are 00h 52m 04.3s of Right Ascension and +47° 33′ 02″ of Declination.

“We wanted this specific constellation because it is named after a queen in the Greek Methodology. It is also in the Northern Hemisphere and is visible year-round should GOT7 members ever want to look for it. The clearest time to view it is between September and November. It is also easy to recognize due to its W shape. It also plays host to some of the most luminous stars known.” says @ot7agha 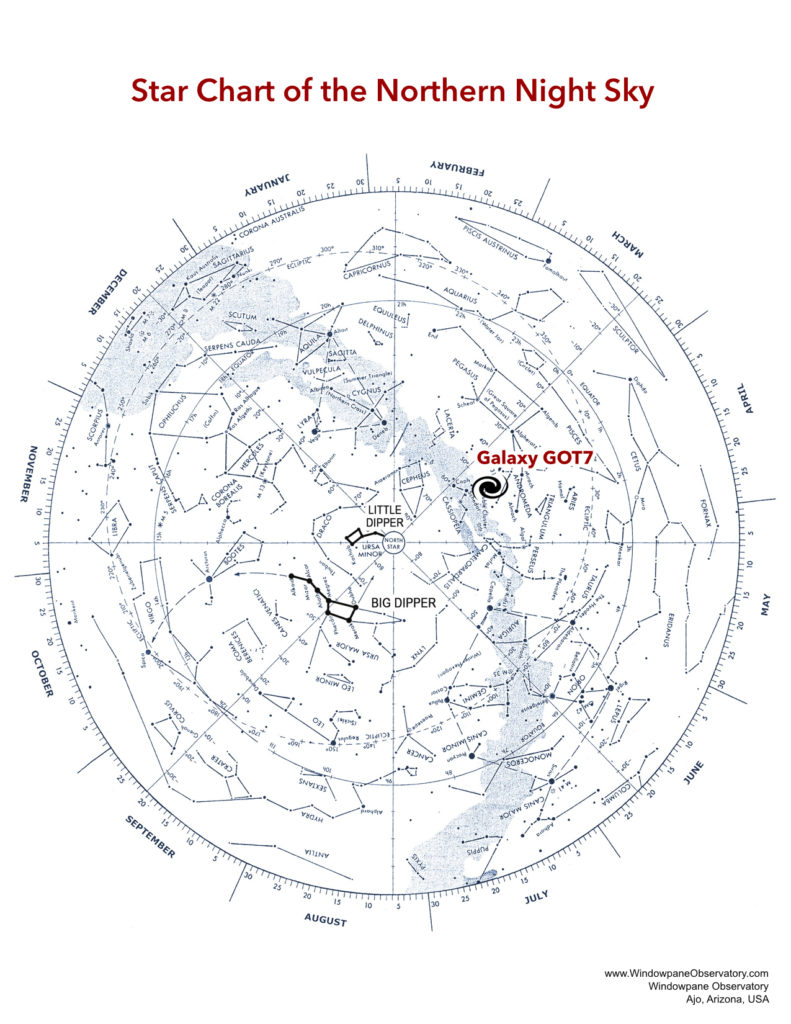 “We hope that they themselves will find comfort in us when they look up into the night sky in the same way we found comfort and solace in each one of them.” adds @ot7agha

Speaking to @ot7agha, they revealed that when they spoke with the astronomer who helped them choose this galaxy, he asked them to describe what GOT7 means to AhGaSe – needless to say, the list was endless. The astronomer himself was in awe and right after the phone call he visited GOT7’s official YouTube channel and emailed back letting them know that he was impressed with their talent and that as the chief astronomer of his division, he included a link to the official YouTube channel on the page dedicated to GOT7 on their website.

We join @ot7agha in wishing all the happiness and success for every member of GOT7, hoping they will get their due recognition in every field, and that they are treated fairly. Wishing them good health as well so that they may continue to prosper. Wishing that with every step they take, they will always remember that they are never alone and they will always soar the skies on the wings of AhGaSe. To AhGaSe, continue to always love and support GOT7 and continue to be the loving fandom that you are. Hopefully, the positive energy you output will have an impact on GOT7 as well.

To support AhGaSe celebrating GOT7’s 6th anniversary, on January 15th 6pm KST make sure to use the hashtags #GalaxyForGOT7 and #갓세븐이라는_은하수.

WATCH: Denis Coleman plans his Without You launch party