"Daughter of the Moon Goddess is a fantasy with grand kingdoms, treacherous courts, and legendary creatures, yet at its heart, it is a story about love."

Spanning multiple years, realms, relationships and quests, Sue Lynn Tan’s debut fantasy novel, Daughter of the Moon Goddess, is a captivating and sweeping legend of epic proportions and we’re so excited to have had the chance to chat to Sue Lynn all about this sensational new tale.

Hi Sue Lynn, we’re over the moon to have you on the site today to chat about the release of your enchanting debut novel, Daughter of the Moon Goddess, which I just finished and adored! For readers just hearing about it, how would you best describe it to them?

I’m so happy to be here and thank you for having me! Daughter of the Moon Goddess is inspired by the legend of Chang’e, the Chinese moon goddess. It is a romantic fantasy of immortals, magic, and love – in which a young woman’s quest to free her mother sets her on a dangerous path, pitting her against the most powerful immortal in the realm.

You’ve mentioned that Daughter of the Moon Goddess is inspired by the Chang’e legend. Can you tell us a little more about that and what was it about this legend in particular that enticed you enough to write your own story from it?

I have loved this legend since my childhood, and it’s an important part of the annual Mid-Autumn Festival of which I have so many wonderful memories. According to the myth, Chang’e was married to the archer Houyi who shot nine of the ten suns destroying the world. He was gifted the elixir of immortality but did not consume it as he did not want to leave his beloved wife. Yet Chang’e took it instead, becoming immortal and flying to the moon.

This legend has stayed with me over the years. Beyond the beautiful images it evoked, its heartrending ending saddened me. There are many different versions of the tale as to why Chang’e did this, ranging from protecting the elixir, to Houyi becoming a tyrant. For myself, I wondered if Chang’e might have been protecting a loved one – a child, who would fight for her mother as her father did for the realm. And it was from this idea, Daughter of the Moon Goddess was born.

Daughter of the Moon Goddess spans multiple years and realms. If you had to choose just one realm from the book to reside in, which would you choose and why?

I would love to live in the Eastern Sea, one of the eight kingdoms of the Immortal Realm! The reigning royal family is more tolerant than others, and it’s a beautiful place with luminous coral, pristine waters, and a wondrous palace. The ocean is also one of my favourite places – its vibrancy, the fresh scent of the air and the way the waters keep shifting.

Whilst Daughter of the Moon Goddess is filled with action, magic and hidden agendas, it was also heavily about love in its many forms and both the trials and joys that often come with it. Was this an aspect of the book you always planned on writing or was it something that came naturally to the story as it unfolded?

Daughter of the Moon Goddess is a fantasy with grand kingdoms, treacherous courts, and legendary creatures, yet at its heart, it is a story about love. There are many different forms of love explored here, both family and romantic – the wonder of first love, the heartache of parting and loss. I wanted the story to reflect some of the core themes of the legend as I believe Chang’e and Houyi to be in love, which made their separation all the more heartrending.

From epic quests to cinematic battle scenes to heart stopping love stories in many forms, Daughter of the Moon Goddess truly takes its readers on an epic journey but was there a specific aspect of the story you particularly enjoyed writing or one you were found more challenging than expected?

I love writing the quieter moments – the ones where the characters learn more about each other, growing closer, uncovering their desires. I also really enjoyed crafting the world and imagining the different places in the realm whether it was the Jade Palace in the Celestial Kingdom, or a peach blossom forest in the Mortal Realm.

The way Daughter of the Moon Goddess was written and structured made it a wholly unique reading experience (in the BEST way), as it’s unusual to read a single novel span so many years. Can you tell us a little about your writing process and what inspired you to write it the way you did?

Daughter of the Moon Goddess is set in the Immortal Realm, and to the immortals, time is of less consequence as they neither age nor sicken. Years to them would sweep by, and they might not trouble themselves to keep count. I felt the passing of time was important to some of Xingyin’s gained experiences and training. While there was the temptation to dwell longer on all her early experiences, I wanted to balance it with the later events in the story.

When I start a writing project, I usually draft an outline of the story to figure out the plot and main events. However, I also prefer to leave some room for story and character development as I tend to write quite instinctively.

Luckily for those of us desperate for more of your stories, Daughter of the Moon Goddess is the start of a duology. Is there anything you can share with us about what we might expect from book two?

I’m excited for the sequel! Heart of the Sun Warrior, the conclusion to the Celestial Kingdom duology, will be released this November – in the same year. It will continue Xingyin’s journey as she and her companions face a grave, new threat to the realm, and they will venture to previously unexplored parts of the world. 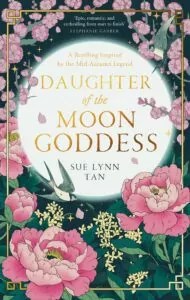 Get your copy of Daughter of the Moon Goddess by Sue Lynn Tan here.