S.K. Ali on spirituality, TikTok and her gorgeous new YA novel, Love from Mecca to Medina

Romantic and deeply emotional, Love from Mecca to Medina, the follow up to S.K. Ali’s hit young adult romance, Love from A to Z, is a moving and honest love story that easily burrows into its readers hearts, to live there forevermore. To celebrate the release of Love from Mecca to Medina, we’re so excited to have had the chance to chat to S.K. Ali all about this stunning sequel and all that it means to her.

Hi Sajidah, we’re so incredibly excited to have the chance to chat to you today about your new and fabulous YA novel, Love from Mecca to Medina! For readers just hearing about the book, how would you best describe it to them?

Love from Mecca to Medina is the sequel to Love from A to Z, in which Adam and Zayneb met each other — on a flight during Spring Break — exactly when they needed to in their lives. The sequel takes readers on several journeys, including to Mecca and Medina as promised in the title, and into Adam and Zayneb’s ever after, which is fraught with several issues, including the complications of long distance relationships as well as the spectre of old love interests. Basically, it’s a very real story set in an extraordinary setting. Also, there’s a cat named Bertha Fatima who shares her POV as occasion demands it.

Love from Mecca to Medina is the sequel to your equally gorgeous novel, Love from A to Z. Had you always planned to return to Adam and Zayneb’s story?

I returned to Adam and Zayneb’s story because there was space in the vastness hinted at in the epilogue of Love from A to Z to explore more about them. I didn’t actually realize I wanted to write a sequel until I kept imagining little stories with the two characters. This, along with readers asking for more Adam and Zayneb, led me to the decision to continue their story.

What was it like jumping back into the minds and lives of Adam and Zayneb after having spent time away from them and do you think you’ll return to their story again in the future?

It was fun! Both Adam’s and Zayneb’s voices are ones I can slip into easily as a writer. Maybe it’s because they are so disparate — and so alternating between the two is clear and doable; it’s just a matter of deciphering and communicating the stark differences in the ways they view and interact with the world. As for more A and Z, no, we’re done with their storylines. They’re living their ever-after happily and unhappily, with fun and struggles and golden moments and heartache and intense connections and misunderstandings and joy, just the way I want them to. (But I assure you that I am working on other interesting couples with other interesting stories.)

Can you tell us a little about the inspiration behind Adam and Zayneb’s story in Love from Mecca to Medina?

I knew for certain that I wanted their sequel to be set on a trip — and for most committed Muslims, the best trip in the world is to do the pilgrimage in Mecca, either Hajj (the greater pilgrimage which takes place at a certain time in the year) or Umrah (the lesser pilgrimage which can be done at any time during the year), and to visit Medina, the city that hosted the first thriving, pluralistic Muslim community. As I considered setting the story during pilgrimage, I realized that doing so would actually be a great test of character — which is a huge part of my job as an author, to test my characters. This becomes especially so because pilgrimage groups often operate like summer camp, with men and women separated for logistical reasons. This allows for Adam and Zayneb to be away from each other long enough to struggle to understand themselves individually before they come to understand themselves as a couple. (It also allows for the will-they-get-together tension that’s so essential for a novel with romance elements, hard to pull off after the couple has gotten together.

All of your books star unapologetically Muslim protagonists and have a strong focus on faith and religion but Love from Mecca to Medina delves further into spirituality, specifically the way Adam and Zayneb connect/reconnect to their faith spiritually. Having adored (and happily devoured) the book myself, I got the feeling that this journey, both in the literal and the spiritual sense, was incredibly important for you to explore?

Oh I love that you understood that because yes, this was a very personally spiritual book for me. Whereas in Love from A to Z, I cried while writing certain scenes of the family relationships, in writing Love from Mecca to Medina, all the crying happened when I wrote the spiritual parts. For me, it boiled down to remembering the simplicity of my faith. How easy it is. Because the world with all its heaviness can make things appear harder then they are. Especially with the strain of pervasive Islamophobia out there that blows up this ugly balloonish caricature of “the Muslim” and waves it around enough for the image to stick in people’s heads and hearts, enough to even colonize Muslim souls. In writing this story, I got to whittle why I’m Muslim down to its basics, basics that are at the heart of most religions of the world. I’m not going to mention the basics here because I hope you read the book to find out…

Haha, love this question! If they were starting separate TikTok accounts it would be Zayneb talking directly to the camera about an issue-of-concern, perhaps doing duets with other creators who have the “wrong take” on something, which she would then methodically take apart. She’d go viral for a TikTok where she takes on a far-right political figure and demolishes him. Adam would offer videos of the step-by-step making of his intricate, amazing art. There would be no voice-overs, just really neat instrumental music that you’d never heard before, all from musical artists he wanted to boost. His account would be where you go to de-stress. And he’d go viral for a sound he uses that trends with lots of creators using it to show a thing they’ve made they’re most proud of, even if it’s a PB and Jelly sandwich. Adam would be happy because he’d spurred a feel-good moment and because a previously unknown musician got his “season in the sun” (as his mother taught him everyone should have). Now, their TikTok account together? That’s easy: an interesting one with the handle @marvelOrOddity and they’d go viral — all the time, I’ll add — for two ways to see something amazing or terrible. Like sudden rainstorm at a picnic; we’d have a visual of Zayneb putting away the soggy remains of picnic paraphernalia in the trunk of her car while Adam washes their dishes in the rainwater with his always-on-standby raincoat on, a peaceful smile on his face. (There would be vice-versas as well of course, with Zayneb rejoicing at things Adam was downed by.) [Someone please start this TikTok account?]

Finally, are you currently working on anything new and if so, is there anything you can share with us about it?

I’m working on finishing projects in a few genres, including speculative fiction, rom-com (adult) and a historical. That’s what I love most about writing — the openness it offers to explore whatever I want to creatively! 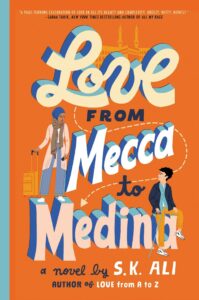 Get your copy of Love from Mecca to Medina by S.K. Ali here.

After six years, Rihanna is finally back with new music

Win 1 of 5 copies of Cruel Illusions by Margie Fuston