Like all great stories across mediums, Science Fiction/ Fantasy is a genre that’s built atop an altar of tropes. Sometimes, you’ll hear people utter tropes like it’s a taboo word. However, it isn’t!

Tropes are what breathe life and vitality and thrills into a narrative sequence of events. Tropes are what compel an audience to connect with a setting and characters. Tropes are why the stories we pick up immediately feel cozy, familiar, riveting, terrifying, and enchanting—sometimes all at once. My debut Science Fantasy, The Blood Trials, is a novel whose setting, worldbuilding, plot, conflicts, protagonist, and ensemble cast heavily lean into the wondrous art of employing tropes in dynamic ways to tell a story. I am continuously struck with humility and awe whenever readers mention The Blood Trials’ worldbuilding as feeling intentional because it was exactly that! From the moment I sat down to hash out the initial plot, characters, political clashes, and interpersonal feuds, every little detail I included, I did so with the aim of adding to the breadth and depth of the past, present, and possible future that forges the planet of Iludu, where The Blood Trials is set.

A good number of the tropes readers will encounter throughout The Blood Trials were also employed with intentional subversion in some way. In particular, I strove to subvert many of those involving themes of identity, personhood, racism, and misogyny. Too often when SFF tropes and marginalized persons come together, marginalized persons get wedged into tropes that are harmful, one-dimensional, and reinforce insulting stereotypes when applied to us. I tried to actively work against that in The Blood Trials. So, let’s talk tropes in the novel and how some get turned on their heads!

First of all, WHAT?! Nope. I don’t know her at all. She doesn’t go here. But, to my infinite aggravation, promiscuity on a woman’s part is routinely coupled with casting some form of disdain or judgement on that character. The Blood Trials throws this whole TIRED trope out of the window. The pages are populated with fierce, confident, self-loving women who are spectacular, know they’re spectacular, and enjoy sex unapologetically. From Ikenna, the protagonist, to her best friend, Selene, to a myriad of secondary female characters, those who choose to be sexual, embrace it full-throttle and give zero cares.

The subversion of this trope is an offshoot of the above trope. Ikenna is a woman, and more specifically, she’s a Black woman. Black women are many times stripped of their desirability entirely in media as if we’re unworthy or affection and love. When we are allowed to retain it, we get saddled with the “Jezebel” stereotype. Meaning, we’re depicted as evil and immoral due to our desirability. In The Blood Trials, Ikenna is painted as woman who is a bold, brash, gritty, and determined warrior who will kick your butt—but also a Black woman who is sultry and sexy, with these attributes being praised as positive, affirming, and beautiful. One of the things that was a must for me when writing The Blood Trials was to give Ikenna an on-page developing romantic relationship with a love interesr who was absolutely smitten with her (even if he refuses to acknowledge it in the beginning, and even if he and Ikenna want to kill each other in the beginning).

The “woman of noble birth” or “The Lady” archetype can sometimes reinforce highly problematic ideas about purity and respectability in regards to women. This is yet another stereotype that I worked to subvert in The Blood Trials because it’s a novel that tackles racism against darker skin individuals as much as it’s a novel that challenges sexism against all women. Ikenna’s best friend, Selene Rhysien, is a high-society “Lady” of her War House. She’s also a gun-wielding badass you can’t help but adore who will cut you down where you stand for blinking at her wrong, and she lives to piss off men in power who always attempt and stunningly fail to impress the proper behavior of a “Lady” upon her. She calls out BS and backwards thinking every time.

4. The Black Character as The Help.

Too much is the case that we see Black and Person of Color characters in SFF in a role of support. They only exist to further the journey and arc of the white (or white-coded) protagonist. Black characters will be relegated to the mentor, the servant, the lady-in-waiting, the best friend, the comic relief, or even the antagonist. It is maddening, primarily because there is an overabundance of us in those roles and an underabundance of us as the protagonist. Ikenna, a Black woman, is the main character front and center in The Blood Trials, and her supporting cast is there to, yes, experience their own journeys, growth, and arc, but also to be Ikenna’s wing persons in that they bolster and support her growth, journey, and arc.

This is imagery we’ve seen in SFF and all narrative formats since, well, the dawn of time seeing as how it stems from the age-old ultimate battle of Good vs. Evil. However, the trope of good vs. evil comes with heaping doses of anti-Blackness. Darkness (or blackness) will be equated to bad, while light (or whiteness) is equated to good. In The Blood Trials, Blackness is both lauded and celebrated. From Ikenna and her gorgeous dark brown skin, to the neighboring rich and flourishing Kingdom of Khanai that is populated by individuals who are coded Black, this dichotomy for sure is discussed in a nuanced fashion and turned on its head in numerous ways.

Ikenna is very much a reluctant hero, but she isn’t the average variety. She doesn’t begin among humble origins, and she doesn’t lacks self-confidence or faith in their skills. Ikenna is a badass, she knows she’s a badass, and she fights to make the world bow to her badassery. In fact, Ikenna leans toward arrogant. Her conceit and utter chafing under any type of imposed order, authority, or discipline is a part of her arc. She has to learn how not to stab first (simply because she’s sure she’ll win) and ask all the critical questions later. Ha! Ikenna only becomes reluctant to step into the spotlight of leader and hero when her grandfather, a man who was a renowned leader and hero himself, is snatched from her life through murder. Then, she becomes afraid she can’t possibly measure up because if her matchless grandfather could fail and be cut down, what hope does she have? 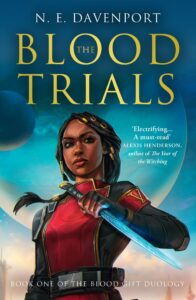 Get your copy of The Blood Trials by N.E. Davenport here.

Mark Tuan is back with the new single save me