Since their debut in January 2019 – with the mini-album Veri-Us and the lead single ‘Ring Ring Ring’ – VERIVERY have been on the rise as one of the most interesting fourth-generation boy groups. Thanks to their enhanced skills in singing, rapping, dancing, and interest in songwriting, composition, and production, the group have piqued the interest of many on national soil and worldwide.

With the 2021 single ‘TRIGGER’, the group amassed over 10 million video views on YouTube, almost 1 million streams on Spotify; the EP SERIES ‘O’ [ROUND 2 : HOLE] debuted at No. 1 on the U.S. iTunes Albums chart, and the single topped the U.S. iTunes K-pop Songs chart, proving the group’s popularity and their eagerness to grow.

After the release of their most recent single-album SERIES ‘O’ [Round 0: WHO], VERIVERY shared with us more about the creative process behind their music, 2022 goals, and more during our interview. Watch and read the interview below.

What songs would you recommend to international listeners as an introduction to your music?

MINCHAN: I recommend the new title song ‘O’. I think it’s a great song to listen to while walking down a street at dawn.

GYEHYEON: I recommend the title track ‘O’. It’s an easy-listening R&B dance song that you will enjoy listening to.

YEONHO: I would recommend the title song ‘O’; as VERIVERY has challenged themselves with a new concept, we’d like to ask VERRERs and overseas listeners to give it loads of love.

YONGSEUNG: I’m confident in our title tracks, and that’s my recommendation. You won’t regret listening to all of them. 🙂

KANGMIN: I think VERIVERY are challenging themselves with various music styles, and I recommend “Ring Ring,” a new jack swing song that was a challenge when we debuted.

What can the fandom VERRER look forward to in this comeback?

You said how ‘O’ has many meanings, one of which is an infinite space to show various sides of yourself. It’s been three years since your debut. Are there any genres or concepts you wish to explore in your future releases?

2022 just started, and you’re already making a comeback; what are VERIVERY’s biggest goals for this comeback? What are some goals you want to achieve this year?

VRVR: With this comeback, our biggest goal this time is for VERIVERY to continue to grow without hesitation and to win first place for the first time. And I hope the pandemic will end, and 2022 will be a year when we can freely meet, communicate, and be together longer and more often with VERRERs.

DONGHEON: I think fans inspire me the most.

MINCHAN: I think I’m incredibly inspired by VERRERs because I’m thinking about VERRER.

GYEHYEON: The song-making process starts by creating a melody first and adding lyrics over it. Inspiration usually comes from watching dramas a lot and from other singers and fans.

YEONHO: In my case, I get a lot of inspiration from watching drama, from VERRERs, and I work with it. And when I discuss it with the members and work on the song, I think a good song has been made.

YONGSEUNG: Four people usually work together in the studio. I get ideas from references, and I often plan and work with clear goals. 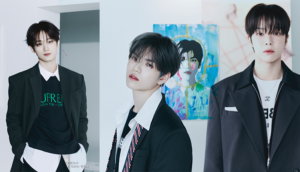 What is your favorite midnight snack food?

MINCHAN: My favorite late-night snack seems to be sweets. I like to eat my midnight snack little by little on my bed.

GYEHYEON: Ramyeon is my favorite.

If you could make a cameo in any film or TV show, what would it be?

DONGHEON: I want to be the main character’s friend.

HOYOUNG: I want to be a student and the main character’s friend.

MINCHAN: I want to play a character with a story that unfolds only when he appears on the screen.

GYEHYEON: I want to try a new villain role.

YONGSEUNG: I would like to be Sung Ki-Hoon in Squid Game.

KANGMIN: I want to be a character that makes people laugh. 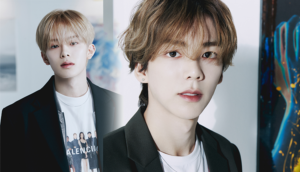 If you could be transformed into one animal, which one would you choose?

HOYOUNG: I would like to turn into an eagle so that I can fly in the sky.

MINCHAN: I would like to turn into a sloth and live an unhurried life. Or transform into a bear so I can hibernate in winter.

GYEHYEON: I would like to turn into a tiger. I think they are the most beautiful animals.

YEONHO: I would like to transform into a quokka. Fans call me quokka a lot, and I want to feel the happiness and bond (with them).

What is your last Naver (or Google) search?

HOYOUNG: I searched at what time Korea vs. Iran football match will be.

MINCHAN: VERIVERY’s “O” music video is the last thing I searched for!

GYEHYEON: The last time I did, it was to check the weather.

YONGSEUNG: I search for the meaning of ‘make up room’. It means you want me to clean the room.

You can listen to VERIVERY single-album SERIES ‘O’ [Round 0: WHO] on all the major streaming platforms.

Moreover, VERIVERY have announced their first full album, Series ‘O’ [Round 3: WHOLE], will be released on April 25.

United By Pop wants to thank VERIVERY, Jellyfish Entertainment, and MyMusicTaste for making this interview possible.

Mary Watson on anger, Cape Town and her new witchy YA novel, Blood to Poison