"It wasn’t too much of a stretch to include that ugly side into the story."

Following James, the first Black king of England, after his boyfriend goes missing and royal secrets only he knew about the royal family begin to leak to the public, Benjamin Dean’s YA debut, The King is Dead, is a thrilling royal read rife with secrets and scandals and we had the pleasure of chatting with Benjamin all about it.

Hi Benjamin, we’re so excited to get to talk to you today about your YA debut, The King is Dead! For readers just hearing about your fabulous new book, how would you best entice them to pick up a copy using just one sentence?

It’s a Black and queer reimagining of the British monarchy with enough scandal to shake Buckingham Palace to its core. Or, you know, the official pitch line, which is: ‘Gossip Girl but make it royal!’

I adored your previous two middle grade novels! What made you decide to step into the world of YA with this book?

I absolutely love writing middle grade novels and I’m so proud of Me, My Dad and the End of the Rainbow and The Secret Sunshine Project. But the moment I got the first seed of the idea for The King is Dead, I just knew I had to write it. Before I became an author, I always thought I’d write YA books – the middle grade books were kind of a happy accident! But I’d reached a bit of a mental block with the second book, so putting it to the side and focusing on this new YA idea refreshed me a little bit and I think it helped me finish my middle grade book too.

Can you tell us a little about how you came to write The King is Dead and what inspired James’ story?

I’m obsessed with Princess Diana documentaries, and I think the idea of using Buckingham Palace as the setting for the book was born out of watching those. I also love to insert characters who look like or identify like me into positions of power and authority, or into places they’ve been historically isolated from. I started to wonder what it would be like if a 17-year-old became the first Black and queer king to sit on the throne and how much pressure he would feel as he faces a world that isn’t entirely ready to accept him or his family. I also loved the idea of exploring what might happen behind the palace gates during public scandal and scrutiny, so I inserted a missing boyfriend and a parasitic royal reporter. Before I knew it, the concept for The King is Dead was born.

I was a little bit obsessed with the unapologetic way you called out the often insidious nature of the British press and public when it comes to their treatment of both POC (specifically Black individuals) and queer individuals, which is something I’ve not seen presented in fiction, let alone YA. How did you go about so seamlessly inserting these more serious discussions into a royal thriller?

I think it came quite naturally to me because my background is celebrity journalism, so I know that side of the industry. Since the book is set in the real world, just in an alternate reality, I had to think about how some people would react to having a king that doesn’t look like monarchs of the past, and the unfortunate truth is that not everybody would be supportive. It wasn’t too much of a stretch to include that ugly side into the story.

Your descriptions of Buckingham Palace were brilliantly vivid, as was the way you wrote the realities and duties of royal life. Did you do a lot of research into the Royal family and their homes whilst writing and if so, what was the most surprising thing you learnt?

I did quite a lot of research into the royals and Buckingham Palace so I had something to draw from when I was writing. One coffee table book I bought was fantastic as it was just professional pictures from inside the palace with floor plans and the history of each room, so I would just flick through that when I was thinking about the setting. The most surprising thing I learned, and something that definitely inspired The King is Dead in the beginning, was the famous story that may or may not be true about Princess Diana being dressed up in boy drag by Freddie Mercury and going on a night out to the Royal Vauxhall Tavern. I thought this was so amusing and I originally had some scenes planned where James would do something similar to celebrate his 18th birthday. I didn’t end up using those ideas in the end, but who knows, they might come in handy in the future.

Imagine you’ve found yourself the King of England for the day; What is one positive and one silly/selfish way you’d use your new found power?

The funny thing is you don’t really have all that much power as the monarch! But if I found myself as king for the day, I would love to do a Diana and go out in public in disguise and see if anybody recognised me. And then, to use my power in a positive way, I’d love to focus on pledging support to LGBTQ+ charities.

I am! I’m currently editing my next middle grade novel, which differs slightly from my previous ones in that it has a fantasy element to it. It’s been so exciting to work on a new project and try things I haven’t done before. And then it’s straight into my next YA book, which I can’t tell you about just yet, but it’ll include just as much, if not more, scandal as The King is Dead. 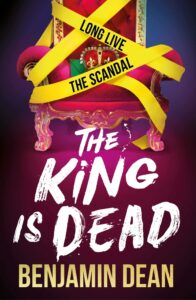 Get your copy of The King is Dead by Benjamin Dean here.