The satirical video marks her directorial debut and depicts multiple examples of everyday sexism, alongside the more inconspicuous struggles that she’s personally faced in the industry.

Taylor Swift has dropped the video for her latest single ‘The Man’, and boy is it a good one.

The satirical video marks her directorial debut and depicts multiple examples of everyday sexism, alongside the more inconspicuous struggles that she’s personally faced in the industry. It’s clever, (sadly) relatable and has an important message whilst also managing to somehow be her most hilarious video yet.

As always, the music video is jam-packed full of Easter eggs; we’ve done some sleuthing and have rounded up all the clues from start to finish (including the ones you might have missed!) 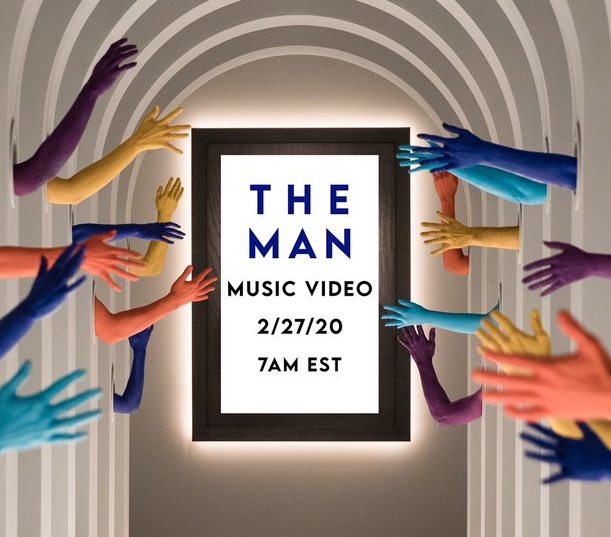 The video was released on 27/02/20 and if you add the digits together, you get 13 – Taylor’s lucky number. But that’s not all… the music video was also teased with an image of 19 hands in a hallway, leading fans to suspect that it was a nod to the 19th amendment of the US Constitution (i.e., the one which defended women’s right to vote). The date it was upheld? 27/02/1922. The EXACT same day 98 years ago.

Look closely and you’ll spot that when The Man crumples up a piece of paper and throws it in the air, his female colleagues in the background catch it and freak out like bridesmaids with a wedding bouquet.

3. The ‘Wolf of Wall Street’ reference

The opening office scene draws a striking parallel to the film ‘The Wolf of Wall Street’, which famously stars Leonardo DiCaprio (who she later namechecks in the song). Hold that thought because we’ll come back to it further on.

4. You can spot her own merch

Taylor’s been known to regularly wear and make use of her own merch, so why not promote it in a music video? A girl on the train can be seen wearing a Miss Americana hoody, the ball girl wears a ‘Fearless Leader’ cap and a water bottle from her Stella McCartney line is featured on the tennis court. 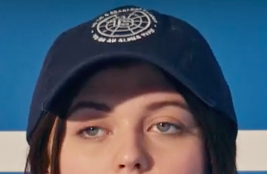 5. The posters on the train

One of them is an ad for ‘Bo$$ Scotch’, which appears to be a reference to her recent Rolling Stone interview where she recalled Scott Borchetta and Scooter Braun “in a wood-panel bar doing a tacky photoshoot, raising a glass of scotch to themselves” after purchasing her masters. The tagline reads ‘Capitalise on the feeling’, illustrating how the pair are profiting off of her personal art and emotion that she puts into her songs. The word ‘greedy’ is aptly spray-painted next to it, which speaks for itself. 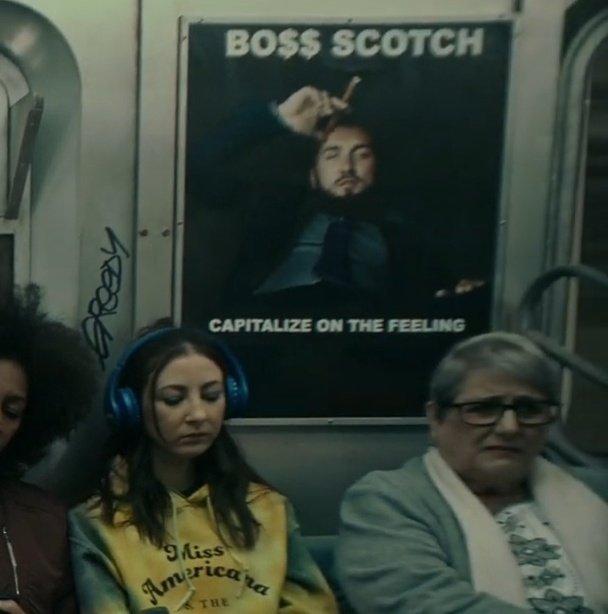 6. The banner at the top of the train

Blink and you’ll miss it, but if you look closely there’s another advert where the words ‘Because you DESERVE what you want’ are visible. This is likely a nod to the song’s lyric “They wouldn’t shake their heads and question how much of this I deserve.”

A headline reads,” What man won the year in celebrity dating?” This highlights the double standards and harsh scrutiny that Taylor has faced from the media labelling her as a serial dater.

The titles of her previous albums are graffitied onto the station wall next to a sign that states ‘MISSING: If found, return to Taylor Swift’, referring to the fact that she doesn’t own the masters to them as they were unfairly sold to Scooter without giving her a chance to purchase them. 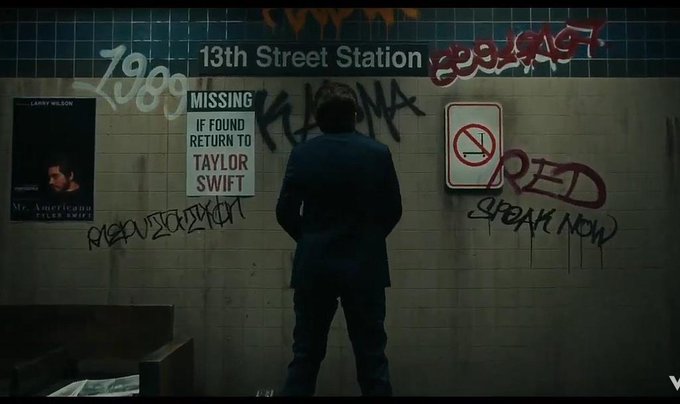 FYI: We reckon ‘Fearless’ is written backward because that was the era when her life was turned upside down by achieving worldwide fame. 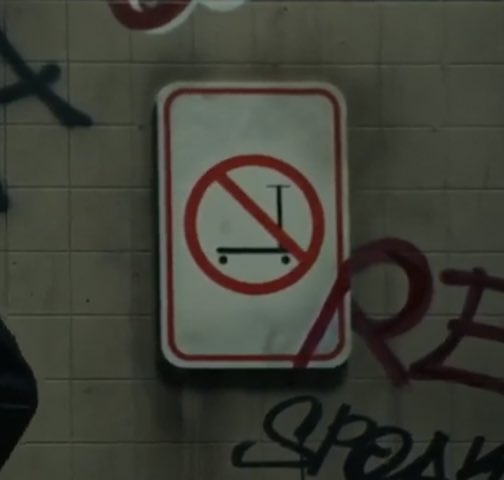 The Man is literally pissing all over a woman’s work. Points were made!! 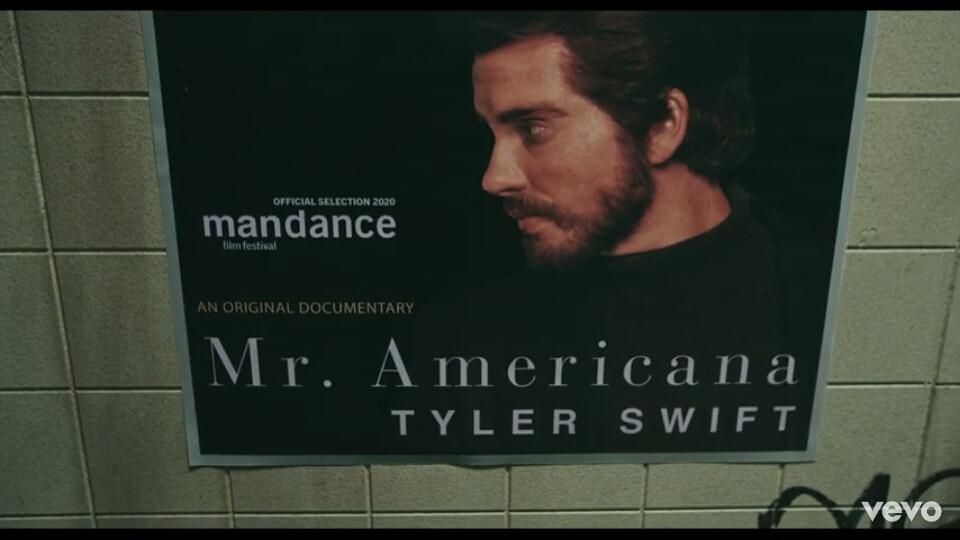 There’s another nod to DiCaprio as The Man parties away with a group of bikini-clad women as we hear Taylor sing the lyric ‘I’d be just like Leo in St. Tropez’. The parallels don’t feel like they’re intended to be a criticism of the actor himself, but rather a way to illustrate the double standards in the way the media report men compared to women. Taylor was publicly shamed for dating “too many people” and “always writing break-up songs”, but nobody bats an eyelid when a male celebrity does the same thing.

The nineteen hands from the teaser that left fans scratching their heads make a lot more sense now, as we realise it’s a metaphor for how men are often praised by their friends for sleeping with women. The Man leaves the bedroom (ditching the girl to wake up alone), and is instantly greeted with a series of celebratory high fives that put him in a ‘hall of fame’, compared to the negative ‘walk of shame’ that seems to be reserved for women only. The scene could also be a nod to her Miss Americana and the Heartbreak Prince lyric “I see the high fives between the bad guys.”

Fans spotted that the mantrum we see The Man have on the court is meant to represent how Serena Williams was criticised for her reaction at the US Open final in 2018. The athlete was fined $17,000 due to her ‘outburst’, which many viewed as unfair and sexist since plenty of men have behaved worse and have been deemed ‘passionate’ for it.

Not that I needed more reasons to love @taylorswift13…

In her new #TheManMusicVideo she pays homage to Serena Williams – and her fight for gender equality in the sport.

This scene was referencing the US Open incident when she was mocked by the media. pic.twitter.com/gM6k5GsD8v

16. The umpire is Taylor’s real-life father

“Hey dad, wanna be in my music video? I have this idea and basically you just get tennis balls thrown straight at your face…” God bless Scott Swift

17. The ball girl is Loren Grey

She’s the most-followed person on TikTok and executes a top-notch eye roll in the video. 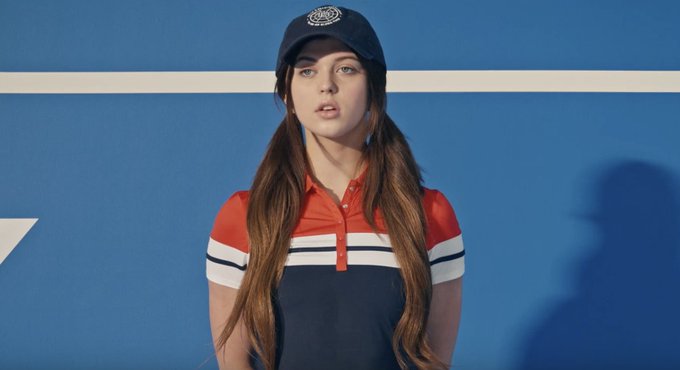 19. Her glam team are the wedding guests

You can see her stylist Joseph Cassell and make-up artist Lorrie Turk on the left.

Near the end of the video, multiple boxes are visible on the tennis court that have the words ‘green bean’ printed on them. We reckon this is a clue about her old pal Lorde as not only does the singer have a track called Tennis Court, but a frequently misheard lyric of hers is, “You can call me green bean.” Perhaps we can expect to see them reunited on the Lover Fest line-up this summer? 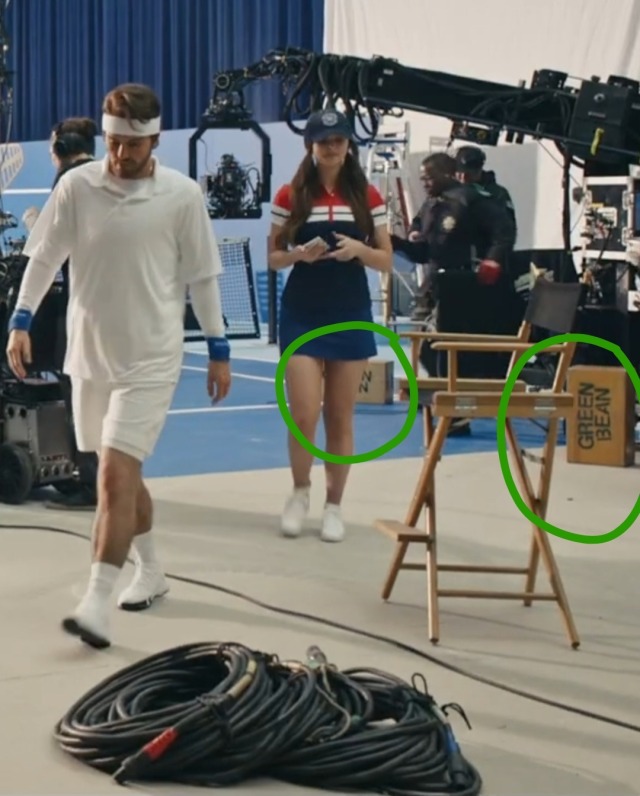 Tay jumps out of her director’s chair to give The Man some sardonic advice that is said to literally no male actor ever: “Could you try to be sexier… maybe more likable next time?” Hardcore Swifties will notice that the line is eerily reminiscent of the way Taylor criticises her own performance in the behind-the-scenes footage of the ME! music video.

22. The identity of The Man

The biggest Easter egg of all? Taylor was The Man the entire time! She spent 4-6 hours in the make-up chair every day and worked with movement coaches to ensure her performance was believable. We’re still shook tbh. 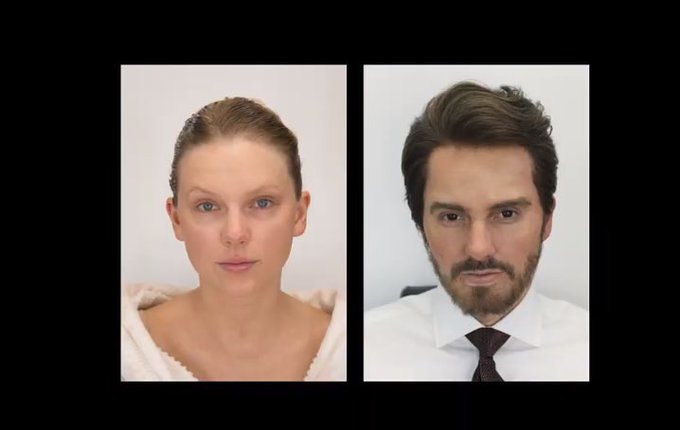 Recognise it? That’s because it’s none other than Dwayne ‘The Rock’ Johnson.

In other words, f*** you Big Machine.