Save The Cinema starring Tom Felton is out today

The inspiring true story that has been turned into a Sky Original is out today (14/1/22).

If you are a fan of Tom Felton then you’d know that the last few weeks have been highly exciting for the successful actor. First he featured in the Harry Potter 20th Anniversary: Return To Hogwarts to talk about his most famous role of Draco Malfoy and now his brand new film Save The Cinema has just come out to grace our screens.

Save The Cinema is based on a true story about a small town in Wales, known as Carmarthen. It focuses on how, in 1993, the Lyric Theatre was set to be demolished but Liz Evans (who is played by Samantha Morton) countered this decision. In a final bid to save it, Liz appeals to Steven Spielberg for help. 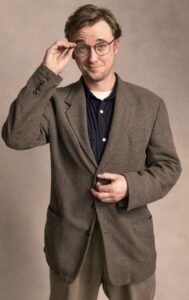 Tom plays a postman turned town councillor called Richard Goodridge. In an interview earlier this week, on BBC’s The One Show, Tom revealed that he’d never met Richard but was given a handwritten letter.

The One Show presenters surprised Tom with an incredibly special and touching video message from Richard Goodridge himself. He even got an engraved medal made for Tom and presented him with it during the video message. You can watch the touching video down below.

The real life Richard who @TomFelton plays in new film, 'Save The Cinema' has a very special message for Tom! 💌

Save The Cinema is available to watch on Sky Cinema now. It has also been released on NOW streaming service, if you have a Sky Cinema membership.

Hands up, who’s still crying at Tom being presented with that medal?