Tickets pre-sale start on Wednesday, January 18th and tickets will go on sale to the public from Friday, January 20th. For more information, including sign-up for pre-sale and public sale, visit tour.jackson-wang.com.

Jackson brought his MAGIC MAN World Tour to Asia and Europe, with sold-out shows in Bangkok, Kuala Lumpur, Singapore, London and Paris to celebrate the release of his second album MAGIC MAN, featuring the singles “Come Alive”, “Cruel” and “Blow”. With MAGIC MAN Jackson Wang scored his highest entry on the Billboard 200 Chart. MAGIC MAN went straight into the Top 20, debuting at No.15. This marks Jackson‘s all-time high debut on the American chart.

For the second year in a row, Jackson will perform at the Coachella Valley Music and Art Festival on April 16th and April 23rd. In 2022, Jackson was the first-ever Chinese solo artist who performed on the Coachella main stage as part of 88rising’s ‘Head In The Clouds Forever’ set.

Moreover, Jackson headlined the League Of Legends 2022 Worlds Championship Opening Ceremony with a performance of his latest single, “Fire to the Fuse,” a Riot Games Music written and produced track and the theme song for the new “League of Legends” Empyrean skin line alongside Lil Nas X in San Francisco. The track peaked at No. 1 on Billboard’s Hot Trending Song Chart. 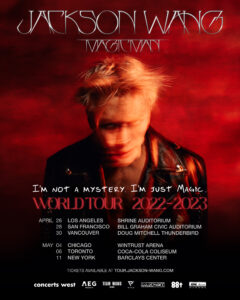 Park Jinyoung gears up for the release of first solo album Chapter 0: WITH