With over 41 million monthly listeners, this is the highest peak in his career so far.

Despite the general situation, seems like it is a very happy time for Harry Styles, who keeps climbing charts and officially became the 20th most popular artist in the world on Spotify with more than 41 million monthly listeners. 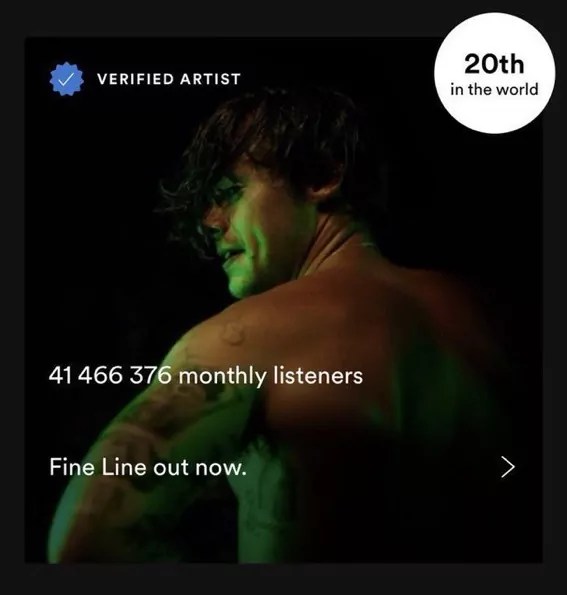 His second album Fine Line debuted at No. 3 on the UK Albums Chart and at No. 1 on the Billboard 200 (matching his debut album Harry Styles and making Harry the first UK male artist to debut at No. 1 with his first two albums); it was also the last No. 1 of the past decade and the first No. 1 of the new one.

And, seven months after its release on 13 December 2019, it is still doing extraordinary numbers. All his singles from this record have done and are doing amazing, not only the ones that came out before the actual album release, but also the post-album ones which doesn’t usually happen that easily.

His track ‘Adore You’ – for which our Harold created a whole fictional island, Eroda, because he is that extra – has been on Billboard Hot 100 for 30 weeks now. His latest summer hit ‘Watermelon Sugar’ has been on the same chart for 15 weeks and keeps moving up while gaining great airplay; it also peaked at No. 5 on the global Spotify chart again this week, matching its highest peak to date.

All these achievements might be the reason why there’s been a lot of talking about Harry getting a G-word nomination but, since we are sadly used to him being UNFAIRLY snubbed and don’t want to clown or jinx it, we’re not gonna talk about it. Just cross your fingers and act cool, y’all!

Regardless of any award ceremony, Styles seems unstoppable while he keeps breaking his own records and outselling himself: nine months ago he counted 7 million monthly listeners, not even a month ago he surpassed 33 million entering the top 50 and now, with over 41 million listeners, he is one of the 20 most-streamed artist on Spotify in the world. With no collab or remix.

Rumours are true: this is really Harry Styles’ world and we are just lucky enough to live in it!

JLS are back in the studio

The UMA is soon-to-be pop-rock royalty