Tanya Byrne on grief, Brighton and her stunning new YA novel, Afterlove

"Afterlove was supposed to be a book about grief, but as I was writing it, I kept thinking about what people want when they lose someone."

Exploring life, death and love in all its forms, Tanya Byrne’s newest novel, Afterlove, is one of the most unique and beautifully written YA releases of 2021. Having both devoured and adored this gorgeous book, we couldn’t have been more excited to have had the opportunity to chat to Tanya all about it.

Hi Tanya, it’s so great to have you on the site to celebrate the release of your new and utterly wonderful novel, Afterlove. For readers who may not be familiar with its premise, how would you describe it to them?

Thanks for having me! Afterlove is told in two parts: Before and After. Before is the story of Ash and Poppy who meet and fall hopelessly in love. Then, on New Year’s Eve, Ash dies. The legend goes that the last person to die on New Year’s Eve becomes the grim reaper for their parish. So, the After part of the book is about how Ash joins two other grim reapers and becomes responsible for escorting the recently deceased to the beach where the Ferryman is waiting to take them wherever it is that they’re headed next. Just as Ash is adjusting to her new ‘normal’, she sees Poppy again and – no spoilers! – the couple finally get an ending to their story.

Thank you! I’m so glad you think so. Sadly, my mother passed away the day my last YA novel was published. I got through it the only way I know how, by writing through it.

Afterlove was supposed to be a book about grief, but as I was writing it, I kept thinking about what people want when they lose someone. All I wanted was one more day with my mother to tell her all the things I didn’t get a chance to tell her and ask all the questions I thought I had time to ask.

I started writing about that, but then I remembered that after I wrote my first novel, Heart-Shaped Bruise, I pitched an idea about a teen grim reaper to my editor. She didn’t go for it, though, so I put it in a drawer and, while I was thinking about the one more day thing, it came back to me and Afterlove suddenly came together.

As for the world itself, I must confess that I don’t have much of an imagination. I wish I could write fantasy, but I can only write what I know, so the world in Afterlove is very ‘real’. Everywhere I mention exists and I figured that grim reapers may well move among us because everyone is going to die one day, right? I also liked the idea of it being a job, like any other. So, Ash pretty much sits around all day, waiting for someone to die!

Brighton is one of my favourite parts of the UK, so I absolutely I loved the way you so vividly mapped out the city. Do you ever find yourself thinking of the Afterlove cast when walking by the places featured in the book?

As soon as I decided to revisit the idea of a teen grim reaper, I knew it had to be set near water so Brighton was the obvious choice. Mainly because I live here myself, but also because I liked the idea of setting this off season. So, the story starts at the tail end of the summer melting into the autumn, when everything is crisp and golden and hopeful. But when Ash dies, and the story shifts into the After, it’s winter. It’s teeth clenchingly cold and the reader gets to see the real Brighton. What it’s really like to live here, without the rainbow flags and fish and chips on the beach.

So, yeah, I think about the characters all the time. I live near Poppy’s house and walk my dog in the gardens where Ash’s dad works and every time I pass the mini golf course on the beach I think about Esen waving her club around, yelling about magnets.

Like I said, everywhere I mention exists. From Snoopers Paradise, where Ash and Poppy get their photos taken in the Photomatic Booth, to the Flour Pot Bakery on Sydney Street, which becomes ‘their’ café. Everywhere except for the bookshop. That’s based on a real bookshop that was in another part of the Lanes, but it’s sadly closed down.

Ash and Poppy’s love story takes readers through a rollercoaster of emotions. Is there one particular Ash and Poppy scene you think of as a favourite or one you’re particularly looking forward to people reading?

Yeah, the first half is pretty intense. It’s about two people meeting and connecting in a way they never have with anyone and are consumed by that. So, I loved writing their first kiss because Poppy tells Ash she’s going to do it, but won’t tell her where or when. Then it happens, but it still catches Ash completely off guard.

There are so many other moments that were a joy to write. How they meet. Their day out at the Tate Modern. The party on the beach on New Year’s Eve. But I think the final chapter is my favourite. Again, no spoilers, but I hope it’s a fitting ending to their story.

Afterlove’s conclusion will undoubtably stick with readers Ash and Poppy’s ending way beyond the last page. Was writing the end in this way a conscious decision and did you always know how Ash’s story would conclude?

It’s hard to talk about it without giving it away, but I will say that I wanted it to be honest, but still end on a note of hope, which I think it does. It’s funny, because I set out to write a book about losing someone, but it ended up being about getting them back.

What’s one message you’d like for readers to take away upon finishing Afterlove?

Whoever you are, you deserve to love and be loved without having to change a thing about yourself.

Because I can’t not ask, (avoiding spoilers if possible) what do you think the afterlife had in store for Ash and Poppy?

I think the final lines of the book sum it up pretty perfectly!

I’m writing my next novel right now, which is out next year. It’s very different, though. It’s kind of like Lord of the Flies, but with a group of teenagers stuck in a house in the Brecon Beacons taking part in a social experiment. They don’t know it’s a social experiment, though, so, when they find out, they decide to turn it on the professor and show her that teenagers don’t always react in the way you think they will! 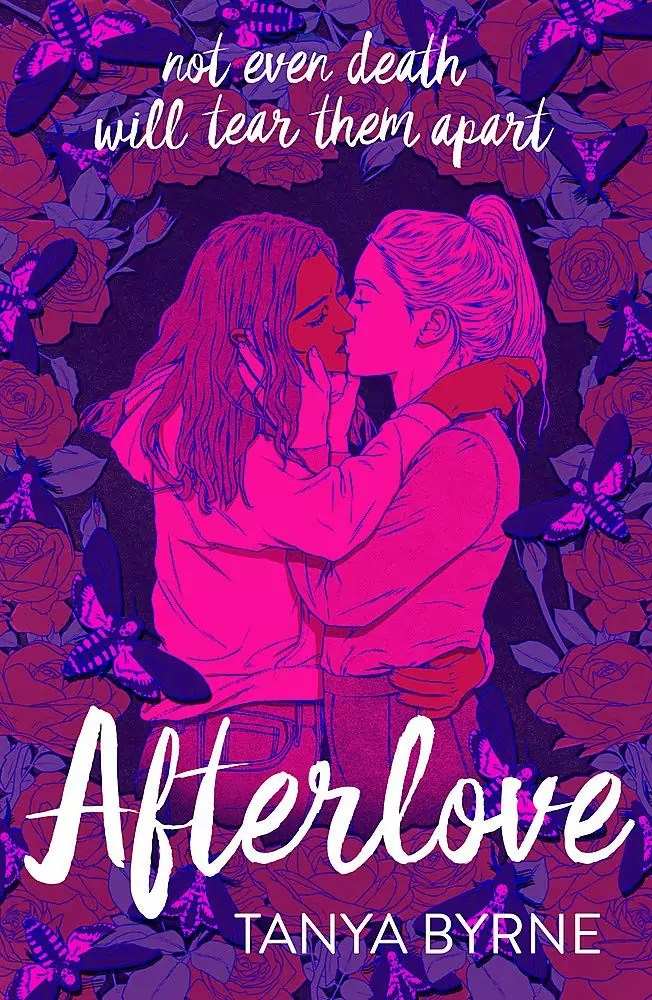 Get your copy of Afterlove by Tanya Byrne here.