Ryan Douglass on the paranormal divide in his YA horror, The Taking of Jake Livingston

"The story explores how society’s relationship to race, sexuality, and masculinity may lead teen boys to violence."

This post was written by Ryan Douglass, author of The Taking of Jake Livingson.

Jake Livingston is an average teenager who’s struggling to fit in at a new high school. To make matters worse, Jake can see the dead living their final moments of death on repeat. And in his junior year, Jake finds himself stalked by the ghost of a school shooter who committed a mass murder a year prior.

Like every teenager, Jake struggles to make friends, ace his assignments, and live up to his mother’s high expectations. But during warm up in P.E. he watches a boy repeatedly impaled by a falling javelin on the rugby field. On his way to school, he watches from the window as phantom cars crashes lead drivers to their dooms, over and over again. So, no driver’s license for Jake. In fact, the dead world depicts life as a place of such constant horrific ending, that Jake would rather pretend it doesn’t exist. It’s time to be more intentional about making friends other than kid who happened to talk to him when he first started at St. Clair. The only problem is at St. Clair, he’s the only Black kid within a five mile radius, and sometimes the feeling of being bullied by white kids is even worse than when his soul leaves his body and drags him to the scene of gruesome murders. In both worlds, Jake feels like his agency just out of reach. As badly as he wants to be the real him, his life is barely his.

Enter Sawyer Doon. The diary entries of Jake’s future adversary pepper the narrative before Jake even knows the boy is watching him. His story starts after an early release from a psychiatric ward at the behest of his mother. His attempted suicide has left him at a distance from his mother and sister, and now his mother struggles to manage his impulsive emotional reactions as his sister insists he try harder to adjust to a social life. Sawyer would rather indulge his penchant for cruelty by dismembering bugs in the old shed behind his house, and envision bad things happening to the people who’ve wronged him.

When Sawyer invades Jake’s life, he shows up in the form of small signals: blood scrawl on his wall, messages desecrating the pages of Jake’s English book. And then, he starts to watch him in school, spurring Jake to discover just what Sawyer wants from him. It seems like Sawyer just wants to toy with him. As Jake delves into dead world to discover the origins of his stalker, he finds that Sawyer faced similar struggles to belong. He sought the same sense of friendship that Jake does, but couldn’t connect with his peers. And he, too, retreated to the private recesses of his own mind, rooming with a festering frustration that had no healthy outlet. He saw things he wanted to forget, and he felt like his body wasn’t his. So, how much of Sawyer’s turn toward evil was due to the trauma from his gun-toting, conservative family? How much would have been different had his softer qualities not been rooted out at such a young age? And how much of his violence came from natural evil?

Jake deals with a toss-up of questions as he decides that life is not worth living if someone else has control of his body. He starts to hang out with friends who’ve made themselves available—a Chinese-American classmate, and a new Black boy in school, who’ve also felt the sting of racism, and pressure from their parents to succeed. Allister Burroughs and Fiona Chan pull out the softer parts of Jake, and his life, for once, starts to feel like it’s his.

But Jake’s joy only makes Sawyer more eager to possess him. If Jake doesn’t find a way to banish him, Sawyer will take all the love that Jake has found for himself. When his faced his most powerful ghost yet, Jake discovers his culture may be the most vital part of his ability, despite the teachers and peers who’ve demanded he root it out. The story explores how society’s relationship to race, sexuality, and masculinity may lead teen boys to violence. 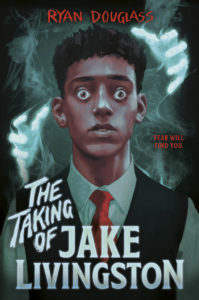 Get your copy of The Taking of Jake Livingston by Ryan Douglass here.