12 facts about the Harry Potter franchise you didn’t know

Harry Potter is one of the highest-grossing global franchises, and everyone has heard of the Boy Who Lived. But not everybody knows what really went down behind the scenes and between takes with the actors on the incredibly famous set. 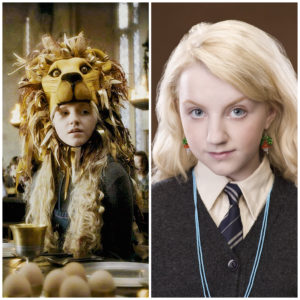 3. Evanna Lynch helped to design the Lion hat
Evanna Lynch helped to draw up a concept of the famous Gryffindor lion hat in Order of the Phoenix, and she later said that it was her favourite prop. She told designers that she “wanted the hat to look as if it was eating her head”. Evanna also made Luna’s dirigible plum earrings; she wore them to her audition since Luna wore them in the book, and they even ended up in the film.

4. Ralph Fiennes improvised
Ralph Fiennes wasn’t supposed to hug Tom Felton at the end of the battle scene the Deathly Hallows: Part 2. He improvised it, hence why Tom stops in his tracks.

5. Daniel Radcliffe was allergic to contacts
Before filming started for Philosopher’s Stone, director Chris Columbus tried Daniel Radcliffe with green contact lenses (which are the same colour eyes Harry has in the book). Daniel had an allergic reaction to the contacts and ended up not wearing them, he also had an allergic reaction to the nickel in the first set of glasses, so they had to be changed too.

7. Tom Felton’s pockets were sewn
Tom Felton was the cause of the cast having to have the pockets on their robes sewn up. He was caught smuggling food onto the set in the pockets of his robes, which wasn’t allowed, and as a result, everybody had to have their robe pockets sewn up.

8. The Golden Trio were given homework
The director of Prisoner of Azkaban, Alfonso Cuarón, asked Emma Watson, Daniel Radcliffe, and Rupert Grint to write an essay on each of their characters. Emma wrote a whopping 16 pages on her character, Dan wrote only one page on Harry, and Rupert didn’t even do the task. Talk about staying true to their characters.

9. Rupert Grint drew a photo for Alan Rickman
Rupert Grint drew a slightly unflattering photo of Alan Rickman when the cast were filming a scene in the Potions classroom, not realising that Alan was standing right behind him and saw. Alan later admitted that “he was very fond” of the drawing and even said he made Rupert sign it to keep.

10. All the actors had crushes on each other
During the first few films, Emma Watson revealed that she “had a terrible crush” on Tom Felton since “he was a few years older and had a skateboard”. Tom seemed to be the only boy on set that didn’t have mutual feelings for her as Daniel Radcliffe, Rupert Grint, and Matthew Lewis all admitted to fancying her in the early years, whereas Tom admitted to fancying Helena Bonham-Carter, who played his Aunt in the films.

11. Every Hogwarts letter addressed to Harry was handwritten
In one of the most famous scenes of the franchise where Harry’s letters shower Privet Drive in the Philosopher’s Stone, every letter was handwritten. That must’ve been a lot of work for whoever wrote them since there were literally thousands of letters and all of them contained fancy calligraphy.

During filming Deathly Hallows: Part 2, it was revealed that Daniel Radcliffe went through 80 wands. He later admitted that he liked to “drum” with them and that was probably why he went through so many. Daniel also went through 160 pairs of glasses during his time on set.

It just shows that a lot more goes on with the actors (and the crew, of course) behind the scenes than we all think!

BTS is back and Butter than ever

How Stranger Things helped me cope with losing a toxic parent