Four years after their fourth studio album, High As Hope, Florence and the Machine have announced the title for their newest album: Dance Fever, out May 15th.

Earlier this month, they released three singles from the upcoming album. ‘King’, ‘Heaven Is Here‘, and ‘My Love‘ are all accompanied by ethereal and whimsical music videos, in true Florence and the Machine fashion. 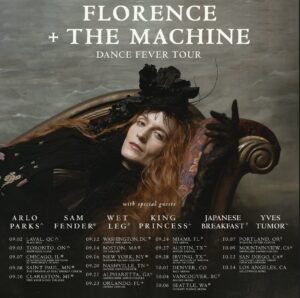 With the exciting news that Florence and the Machine are getting ready to release a new album, they also announced new tour dates.

Frontwoman Florence Welch will be kicking off the album’s release by performing two intimate shows. One in Los Angeles, April 29 at the Los Angeles Theater, and the other in New York, May 6 at the Alice Tully Hall at Lincoln Center.

In September, the band will set off to play 21 shows all across North America, check out all ticket info here and be sure to pre-order Dance Fever.

JAY B releases the OST Dive Into You