"Lights Out" was released at 5am UTC and fans are breaking down.

The star most known for being, in no simpler terms, a chaos demon, has once again driven all his fans mad by releasing a song with no prior warning. (Well, beyond some mysterious posters that didn’t actually include his name. Whatever. He knows he can get away with it. Chaotic little…) But let’s go back to the beginning!

On Wednesday, posters began appearing in major cities around the world, reading “Do You Know Who You Are?” in white letters on a deep blue background. Underneath, simply the letters “TPWK” and the Columbia Records logo. Eagle-eyed fans were able to quickly make the connection between his label and the slogan for his first era, “Treat People With Kindness.”

The next day, he took it a step further, dropping a text generator on #WorldMentalHealthDay with positive affirmations. Fans could write their name and be reassured that they are “creative,” “extraordinary” or (hilariously) “figuring it out.”

Finally, after hours of speculation, Harry finally gave fans a hint as to what it all meant: he was releasing a new single, “Lights Up,” and it would be out within an hour. Alright then.

The song itself is quite a far departure from his previous lead single, “Sign of the Times.” While his debut broke expected pop conventions for clocking in at over six minutes, his new song doesn’t even hit three. It’s also much more radio-friendly, the type of song you’d find climbing countdown charts the way his previous album didn’t try to do. Despite this, it fits seamlessly with his existing discography and feels like a very natural growth as an artist.

Similarly, “Lights Out” still employs the vague but poetic lyrics Harry Styles was known for, as he sings, “Step into the light,” and, “I’m not ever going back.” Just like with “Sign of the Times,” he doesn’t specify where he’s going to or where he’s coming from, but that’s all the better. Instead, fans are left to interpret the song in a way that feels meaningful for them.

For example, realizing that he’s possibly dropping a song with messages that ask fans, “Do you know who you are?”—on National Coming Out Day in the US?

no hetero but harry styles gyrating in a soup of naked guys and ladies is the hottest thing i’ve ever seen???? https://t.co/jMDF1lzzFs

And some, understandably, just wanted to flip out:

DO I KNOW WHO I AM? YES BITCH A HARRY STYLES STAN FIRST HUMAN SECOND pic.twitter.com/xIWguxOpiV

What — and I cannot stress this enough — THE FUCK IS HAPPENING. HARRY STYLES ARE YOU TRYING TO KILL ME. #LightsUp pic.twitter.com/jelFrwREJI

Even Dan Levy got in on it!

Bury me with Harry’s new video.

Anyway, this will be us for the next several days:

Have a lovely weekend if Harry Styles hasn’t ruined your sleep schedule too! UBP out. 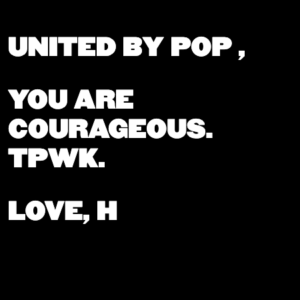 How well do you know the lyrics to Halsey’s new song ‘Clementine’?

Which Skai Jackson show do you belong in?