Rebecca Elliott on comedy in YA and why girls are Pretty Funny!

Being the author of over 30 children’s books (many of which are bestsellers!!), award winning author, Rebecca Elliott, is no stranger to the writing and illustrating scene. However, up until now, she had yet to explore the wonderful world of young adult books.

Thankfully, Pretty Funny, her YA debut has changed all that and we were fortunate enough to chat to Rebecca about what made her take the leap from children’s to YA, her passion for comedy and the beyond ridiculous notion that women aren’t as funny as men.

For readers who may not be familiar with Pretty Funny yet, how would you pitch it to them in one sentence?

Pretty Funny is your debut YA novel. What was it like transitioning from being a children’s book illustrator to writing for young adults? Was there anything about the writing experience that surprised you?

I’ve written a lot of picture books and early readers but unlike writing for the under 10s I love the freedom that writing a full-length novel gives you, the need to be super concise isn’t there anymore and you can really be yourself and take a thought for a walk, which I loved. On the other hand, unlike a shorter book, there comes a point with a novel when you can’t go back and re-read what you’ve already written every time you write another chapter and it all becomes a bit unwieldy, like trying to run with a wobbly jelly in your hands that just keeps getting bigger. But you have to trust that as long as you don’t drop it, it will hold together and keep its shape, and that it will all be worthwhile in the end, cos who doesn’t enjoy a massive plate of jelly (ok so it’s *possible* I might have taken the jelly analogy a bit too far, what were we talking about again?)

Comedy is such a huge part of so many of our lives but a career path rarely seen explored in YA. What inspired you to have Haylah be an aspiring stand-up comedian?

Finding the funny in life has always been a priority to me, and most of the teenage girls I’ve known are hilarious but I think that’s rarely captured in YA. Pretty Funny isn’t in any way autobiographical but Haylah’s character is definitely one I strongly identify with. I had an obsession with comedians as a teenager and used to write (terrible) sketch comedy but I never had Haylah’s confidence to try stand up – and I still don’t! My best friend’s a stand-up comedian and every time she gets up on stage I’m still in awe and utterly terrified for her. In fact, the idea of doing stand-up is a number one fear for a lot of people so it seemed like a good way to explore my main character’s bravery, not in a dystopian hero saving the world kind of way, but in more of a relatable ‘you might not like it but this is me, and dammit I’m gonna stand up and wobble my funny bits in the face of the world,’ kind of way. And even if it’s not a career readers are interested in I just think there’s so much in stand up that teens can identify with, the vulnerability, and the desire to be noticed but not to be judged, plus it’s a good excuse to make a lot of jokes and hopefully make readers laugh. Cos, as Haylah says, ‘When you find the funny in this serious world that is so often full of pain and cruelty, it’s like discovering a diamond in a cave of crap. It’s precious.’

Were there any jokes you wrote for Haylah that didn’t make the final edit and if so, could you share one with us?

Well I was going to tell you a joke about a jumper that doesn’t fit you properly.
But it’ll only go over your head.

(Look, there’s a reason a lot of my jokes don’t make the final cut, ok?)

Do you have any advice for aspiring authors wanting to inject humour into their writing?

Like my character Haylah, I write down everything funny that I’ve heard, thought, or witnessed that day, having notebooks filled with this stuff really helps when you’re desperately looking for funny analogies/phrases/conversations. Although there is a lot that you look back on and think ‘why the frick did I think that was funny!?’ (See joke above).

Pretty Funny brilliantly explores the ridiculous idea that women aren’t as funny as men. Are there any female comedians you particularly love and think everyone should check out?

It’s bewildering to me that this myth exists – in my experience men and women are equally funny, although if anything, when you get a group of blokes out together the actual laughter can take a backseat as they tend to take competitive turns trying to say the cleverest, funniest thing, whereas women end up pissing themselves (often literally but that’s probably my age) with hysterical, dirty, guttural laughter. And as for funny female comedians, where the hell to start!?? I’ve seen Sindhu Vi, Susan Calman and Hannah Gadsby live recently and although very different they all blew me away. As for others, it depends who I’ve been watching more that week but Luisa Omielan, Laura Lexx, Sophie Duker, Sophie Hagen… etc…
Oh and I have to mention my best friend, podcasting partner and genius stand-up comedian that is Kirsty Hudson, because she makes me laugh every day, everyone should see her live, and she’ll kill me if I don’t.

Haylah’s journey with body image and body positivity is one I’m sure many readers will be able to relate to. What do you think Haylah would like to say to readers of her story who may be struggling with this?

Whilst, as with most of us, Haylah will always struggle a little with this as well, I think she’d also say that one of the coolest realisations as a feminist is that there is no right or wrong way for a girl to look, to dress, to act. So be you – big, small, loud, shy, high-heeled and preened, DM-wearing and pierced, and anything and everything in between and outside, it’s ALL GOOD, and it’s all beautiful. So screw the haters, screw the ridiculous expectations of society and social media, the only opinion of you that matters is your own opinion. So be whoever the hell you want to be and be proud – shoulders back, tits out and go show the world who you really are.

From friendships to romance to siblings to mother daughter, you explored many different relationship dynamics throughout Pretty Funny but was there one you enjoyed writing above others?

I loved writing about all the relationships. Although it was a long (LONG) time ago, my teenage memories are still so vivid and in many ways my brain hasn’t evolved much since then so it was easy to throw myself back into those high-intensity, beautiful yet explosive BFF and mother-daughter relationships, and stomach-filled-with-a-thousand-vomiting-butterflies first loves. BUT without a doubt my favourite relationship to write was Haylah’s with her little brother Noah. Four year olds are in equal measure infuriating and absurdly cute and it made for some great comedic moments. It was also an easy character to write as my youngest son Benjy was the same age (4) as Noah at the time that I started writing Pretty Funny and I basically wrote down what he said for a year and used it for the book. Is that cheating?

Do you have any YA book recommendations for fans of Pretty Funny looking for more laugh out loud reads?

Ooo, anything by Becky Albertalli or Louise Rennison, and I’m currently reading Only Mostly Devastated by Sophie Gonzales, which is an absolute joy. 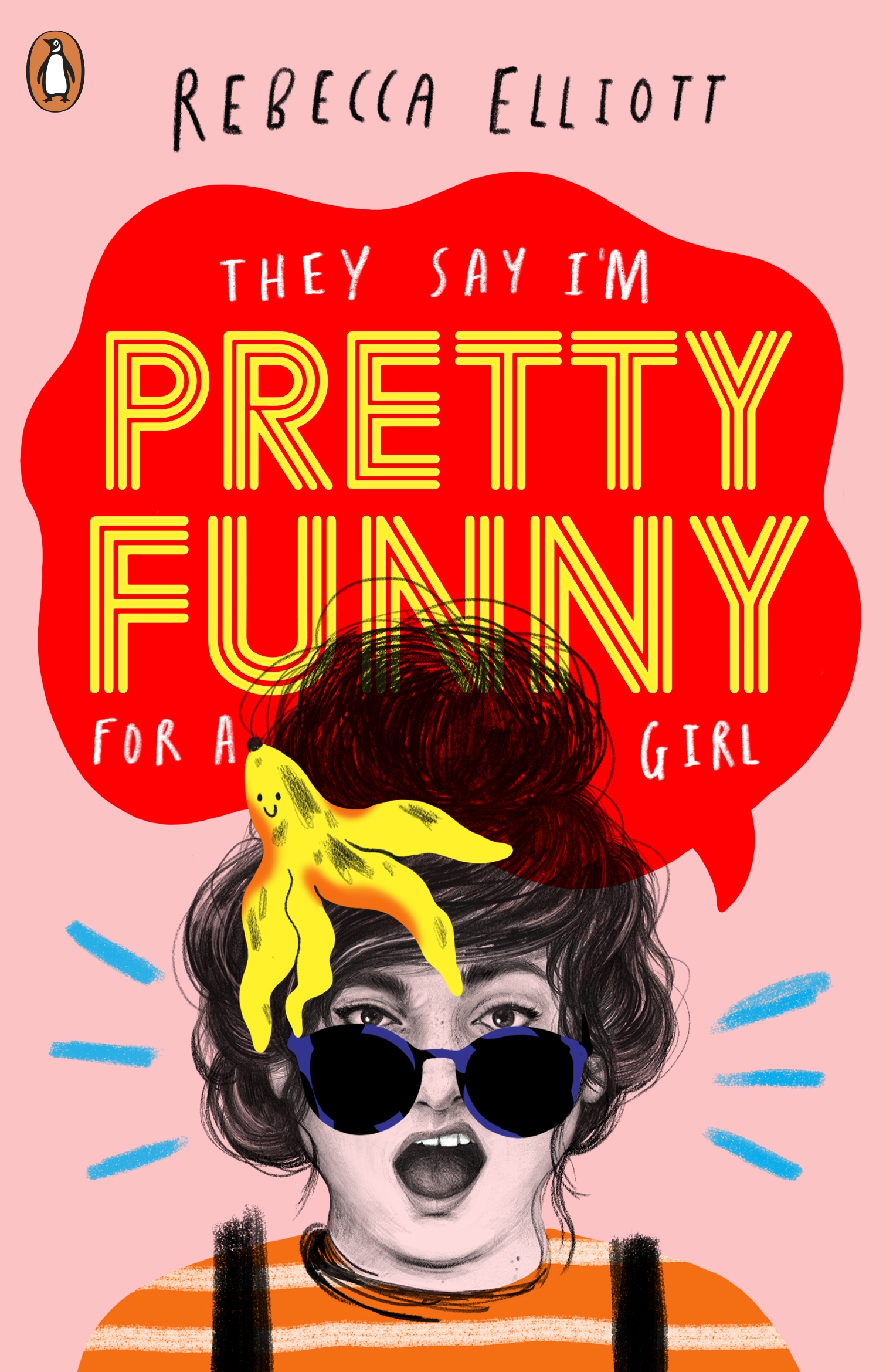 Pretty Funny, by Rebecca Elliott, is released under the Penguin imprint in paperback and is available to buy here!