"many of my favorite rom-coms and authors address societal issues including racism, sexism, inequality, grief, and health, and I love them all the more for it."

This post was written by Lily Chu, author of The Stand In.

[Content note, there are some minor spoilers about The Stand-In below as well as ableist language.]

I write rom-coms. Rom-coms are first and foremost about love. They are also funny. Neither of these themes should be a surprise to readers as it’s right there in the name: romantic comedy. These are books with brightly illustrated covers. Beach reads, or books good for a cottage hammock, or to read by a cozy fire.

Mine also happen to feature characters with mental health challenges. Let me asterisk that line to hell and back: I am not the only rom-com writer who does this, not by a long shot. In fact, many of my favorite rom-coms and authors address societal issues including racism, sexism, inequality, grief, and health, and I love them all the more for it. I like my characters to be dealing with situations that are as realistic as possible, albeit while dating a celebrity or while being fake engaged to royalty.

Mental health wasn’t something that was particularly on my radar when I started writing The Stand-In, which is about a reluctant celebrity doppelganger who falls in love with a movie star. However, as the character of Gracie grew on the page in all of her hot mess glory, she took on some of my own traits. She has an addiction to planners and to do lists. She likes dark lipstick and perfume. She also ended up with my anxiety and depression, as did my other main female character, Fangli.

These days, in some social groups and communities, to have anxiety and depression and to be on SSRIs or go to therapy, is as accepted and common as mentioning you have a dehydration headache. In others, it’s a deep shame that is ridiculed, invalidated, and expected to be hidden.

People may belong to more than one of these groups–for instance, a friend group who is open about mental health and a family unit who tells one to just get over it already. Some people disclose their mental health status on social media platforms to millions. Others suffer in silence and solitude, unable to admit it even to themselves. I wanted my characters to show a bit of both experiences because mental health journeys can be chaotic and fraught. They’re often more of a maze than a boulevard. Although Gracie is open about her treatment, she, like Fangli, struggles with the idea that she can’t fix herself by sheer willpower and the power of positive thinking. Both women fight with admitting they need help, and in what I consider one of the most poignant scenes, Fangli asks why she can’t just be happy for once. Normal, like everyone else.

Although The Stand-In looks only at depression and anxiety, it’s made me think more closely about the language I use in my books. This isn’t unusual–as a writer most of my time is spent fiddling with words to the point that I’ll stare at an arrangement of letters and wonder what words even are anymore.

But lately, I’m thinking about words like crazy. Phrases like That’s insane. Toss away comments like Oh my God, I was so embarrassed I could kill myself. Insults: What a psycho. Are you dumb?

More to the point, I’ve been working hard to make sure that none of these phrases or their kin make their way into my writing. I’m helped by extremely capable editors and copyeditors who don’t hesitate to point out my slips. And there are many, because negative language about mental health saturates our culture. I won’t list them all here, because there are sites (like this one) that outline how we default to ableist language when we really mean shocking or strange or I’m really frustrated with you.

As well as being hurtful to some–and in this day and age, why be hurtful when you can try not to be–words that use mental health as a shorthand are unclear and simply lazy language.

But, one might say, this is how people speak. Writers setting their books in contemporary times need to mirror culture. At times this means using language that we think our characters would use. But books are never a mirror image of reality. Unless we’re pulling a Mrs. Dalloway, we jump our story to the high points to push ahead plot and character and keep the tension high enough to engage readers. We also cut out thoughts that are irrelevant. We edit and revise and deliberately choose each word. The writer has ultimate veto over what the characters do and think. They’re characters! They have no agency. Everything there is from the writer, and I’m willing to bet there are slurs and negative words you’d never consider putting into your story because you morally don’t agree with them–I know I do. Mental health has become one of my no-go categories, the same as insulting language about race or sexuality.

You may decide that for that character and in that scene, the word is necessary. I’ve done this and debated with my editor as to why I thought the phrase should stay, and what it contributed. She forced me to justify its use, and when I could, we decided it could remain to highlight the stigma the character is fighting against.

It may be optimistic to think we can move away from using derogatory mental health language in writing. However, that doesn’t mean that we can’t try to write with sensitivity and accuracy, especially in the world of rom-coms, where joy and a happy ending are part of the reader promise. 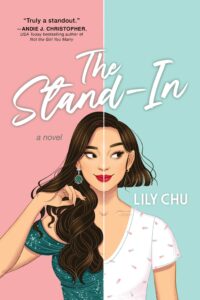 Get your copy of The Stand-In by Lily Chu here.

Kat Dunn talks writing the details of daily life in Glorious Poison, the conclusion to her epic French Revolution trilogy