"The kinds of stories we entertain ourselves with matter. That’s why I write."

Finding Jupiter, the stand-out YA debut from Kelis Rowe is a bookshelf must have for anyone looking for a superbly written story of heartbreak, loss, family and finding love when you least expect or want it. Emotional, adorable, funny and uplifting, Finding Jupiter will leave you with warmth in your heart and a grin on your face. To celebrate the release of this gorgeous book, we had the pleasure of asking Kelis a few questions all about it.

Hi Kelis! It’s so incredibly exciting to have you hear today to chat to you all about your gorgeous debut YA novel, Finding Jupiter, which I utterly adored! For readers just hearing about this fabulous new book, how would you best describe it to them?

Finding Jupiter is a modern love story with a classic feel in which two star-crossed teens navigate summer jobs, first loves and family secrets in Memphis. Ray is an artsy closed-off girl who keeps almost everyone at arm’s length, including her best friend. Ray’s seen how her father’s death left a gaping hole in her mom’s heart and wants no part of any kind of love. Ray finds boys useful when she wants their company, but she’s content to keep her heart tucked away. Orion is a hopeless romantic whose best friend jokes that he is a waste of money and good looks because he’s not a player. Orion is a little awkward and patiently waiting for a connection to the one, right girl. His father makes sure Orion is laser-focused on dominating at the Swim Nationals, and Orion is. Until he sees Ray at The Crystal Palace skating rink and his focus shifts to fulfill a different part of his destiny. As their cosmic journey together begins, a secret surrounding the death of Ray’s father threatens to make any connection between them seem impossible.

Can you share with us your inspirations behind Ray and Orion’s story?

In 2014, I went home to Memphis with my son who was 7 at the time and on his way to becoming a competitive swimmer. We stayed with my parents who still live in the house I grew up in in Whitehaven. One day, I took my son swimming at the neighborhood YMCA. We walked into the pool area and all the lifeguards were taller versions of my son. All, dark-skinned Black teen boys with mops of hair. A girl came in and joined a lifeguard on his break on the other end of the pool. Their flirtation warmed my heart and reminded me of my own summertime flirtations and courtships. As well as that of my parents—my dad was a lifeguard in the 60s and my mom thought he was cute. It would be another year before I decided to write a novel and another two before the story of Ray and Orion came to me, but I reached back to that day and my feelings at the YMCA for inspiration. Many things inspired the character arcs and backstories, but that was the spark.

Finding Jupiter is your debut novel, can you tell us a little about your journey from writing to being published?

I’ve always been a writer. In my twenties, in the early days of the internet, I kept a blog about my life after college. Readers would often tell me I should write a book. I’d shrug it off. When I began to entertain the idea of being an author, I always thought I’d write creative non-fiction and humor like David Sedaris. When I knew I’d be writing YA, I had researched how to self-publish books on Amazon because at the time in the mid 2000s, I hadn’t read any big, sweeping Black teen romances, and figured that my kind of story wasn’t something any publisher would be interested in buying. Then one day I was listening to a podcast and heard Tomi Adeyemi mention that she’d found an agent and ultimately sold her Children Of Blood And Bone via a now, non-existent, Twitter event called Pitchwars where writers submit their manuscripts to volunteer mentors who then select one to help the aspiring author polish leading up to a showcase where literary agents would read excerpts and request to read the manuscript to see if they wanted to offer representation. My journey feels as destined as the love between Ray and Orion, because Finding Jupiter is the first book I’ve ever written. In 2017 I started writing it. In 2019, I submitted it to mentors in Pitchwars. J.Elle, author of Wings of Ebony, selected my quiet, beautiful love story from among hundreds of fantasy submissions. We edited the heck out of that thing and more than 25 literary agents requested to read my manuscript in the showcase. I received multiple offers of representation from an impressive list of agents, and Chelsea Eberley at Greenhouse Literary rose to the top. In 2020, my book sold at auction to Phoebe Yeh, a fellow Virgo and James Taylor fan, at Crown, and this incredible dream continues.

Ray and Orion both had such strong and individual voices, making them wonderful characters to follow. Did you find there was one character who’s perspective was easier to explore whilst writing or one you came across more challenges with?

Orion came to me so easily. I’m not sure why, but his voice was with me almost instantly from the very beginning. And there are a lot of Orion fans, so I will always write books with boys in them. Perhaps because I put a bit of myself in Ray, it was a little harder to reveal her on the pages. Like Ray, I’m a very guarded person. The constant note from anyone who ever gave me feedback on early drafts was about needing the readers to get to know Ray. In my next book, the girl is a little further removed from who I was as a teen, so I’m finding it easier to write both characters this time around.

Ray, one of Finding Jupiter’s protagonists, has a passion and talent for poetry, specifically blackout poetry, which she uses to inspire her art. Are these passions you share?

I kept notebooks of poems as a teen. All kinds of poems including limericks and haikus, broody, blue poems that didn’t rhyme and poems inspired by crushes. I’d escape to my notebooks of poetry and drawings. I included poetry, stargazing, art and music in this book because those things, along with reading, were my teenage survival kit. It was important to me that my book portray teens who have creative outlets that are not performative—where the art and music they create are only meant for their own enjoyment and catharsis. I think creative expression, even if it’s never consumed or judged by anyone else is a healthy form of self-care that benefits teens.

You’ve previously mentioned how, growing up as a Black teen, you never saw yourself or your romance with your then boyfriend (now husband) represented in fiction. How do you think teen Kelis would react/feel upon reading Finding Jupiter?

Yes. I tell this story often and for anyone who hasn’t heard it, I’ll tell it again. In my thirties, I started reading YA for the first time thanks to Hunger Games. I was obsessed with the films and devoured the series multiple times, and more dystopian fantasy followed. At age forty, I read Calling My Name—an artsy coming of age novel by Liara Tamani. It was the first time that I’d read a story and saw myself on the pages. It was such a profound moment that I stopped reading two pages in and sent pictures of the first two pages to my best friend telling her something like, “OMG it’s us!” It was the first time I’d experienced that. The main character’s first flirtation and boyfriend and sexual experiences felt so familiar to me. I read Nicola Yoon’s The Sun Is Also A Star after that, and while I love the story, it was a markedly different experience for me. That’s when I decided that I’d write for teens, and it would be love stories staring two Black teens.

If I, an avid reader of adult fiction as a teen, could have read Finding Jupiter back then, I probably would have come to the realization a little earlier in life that I, a flawed, dark-skinned Black girl, am worthy of sweet courtship and soft adoration simply for existing, the way I’d seen Disney Princesses and Molly Ringwald be desired and doted on my entire teen life. The kinds of stories we entertain ourselves with matter. That’s why I write.

What’s one piece of writing or publishing advice you wish you’d been given before starting this journey that you’d like to pass on to aspiring authors?

Writers write books. Publishers sell them. It’s totally okay to leave it to them. Don’t stress yourself out thinking you need to become a Twitter or Instagram comedian to sell books. But if you find it fun, have at it. I was on social media for over a decade before I became an author, and when I started writing, my platforms morphed into book promotions. I enjoy being on social media and like making pretty things in Canva, so it’s a blast. I can have light-hearted fun online because I know my book is in the hands of an entire marketing department who does their job very well.

Finally, are you currently working on anything new and if so, is there anything you can share with us about it? (I am already super excited to read whatever you write next!)

Thank you! In my next book, readers will see more Black Memphis teens, more friends, and will be in for another modern classic love story. 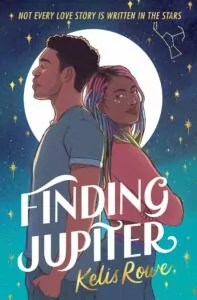 Get your copy of Finding Jupiter by Kelis Rowe here.

Liz Lawson and Kathleen Glasgow on their addictive new YA thriller, The Agathas