"One of the ways I make meaning from my struggles, however, is by giving voice to them."

Featuring a second chance hate-to-love childhood romance, a secretly famous Jewish Christmas romance writer, chronic fatigue syndrome representation and more, Jean Meltzer’s debut adult rom-com, The Matzah Ball is a must read holiday romance and we got to chat to her all about it.

Hi Jean, it’s so great to get to talk to you today to celebrate the release of your debut adult romance, The Matzah Ball! For readers just hearing about it, how would you entice them to pick up a copy?

The Matzah Ball is an #ownvoices Hanukkah rom-com about a chronically-ill, nice Jewish girl (and daughter of a Rabbi!) who has a secret career as best-selling Christmas romance. When she’s forced by her diversity-conscious publisher to write her first Hanukkah romance, she seeks inspiration at the Matzah Ball, a high-end Jewish music celebration on the last night of Hanukkah. There is one problem: tickets are sold out and the only way to get one is direct from the ball’s creator—Jacob Greenberg, the swoon-worthy dreamboat who just happens to be her summer camp archenemy.

Can you tell us a little about the inspirations behind Rachel and Jacobs’s story?

Simply put, I’m a nice Jewish girl who has always had a not-so-secret love affair with Christmas! Because of my affinity for the holiday, I would spend every December immersed in Christmas books and movies. And yet, I never really gotten to see my own story reflected on the shelf.

I decided to challenge myself to write a Hanukkah romance. I wanted to see if I could write a story that would have all the holiday twists, tropes, and magic that I love—but still feel authentic to the contemporary Jewish experience. One of the ways I did that was to take bits and pieces of my real life, and the real world Jewish community. For example, most folks may not realize that Matzo Balls are real events. Typically held on Christmas Eve, Matzo Balls are large-scale parties hosted in major cities, and were originally begun as a way for Jewish singles to meet up on a night when most of their non-Jewish friends were off celebrating.

In addition, Rachel—the heroine in The Matzah Ball—is the daughter of a Rabbi. I spent five years in Rabbinical School studying to become a Rabbi. Rachel is also a character who is homebound by chronic illness. I share the same diagnosis of Rachel, having been sick with myalgic encephalomyelitis/chronic fatigue syndrome (ME/CFS) since 1998.

If you were to start in your own Hanukkah made for TV movie, who would you want as your co-star/love interest?

What inspired you begin Rachel and Jacob’s love story when they were just twelve, eighteen years prior to The Matzah Ball?

The age is a nod to Jewish law. In a halachic, or Jewish legal system, young people under the age of thirteen are not considered responsible for their actions. Despite some bad behavior at summer camp by all participants, making them age twelve essentially absolved them of culpability. (Random Fun Fact: This is why Jews undergo a Bar or Bat Mitzvah at the age of thirteen.) Having them be teenagers would have been more problematic halachically. As I was trying to be sensitive to Jewish sensibilities across the spectrum, I felt it was important to make that distinction.

Eighteen is also a very special number in Judaism. In Gematria, it is the number for chai, or life—and because of this, Jews often give (wedding!) gifts and donations in multiples of eighteen. I thought there was something very lovely about calling back to this special number in terms of their reunion to story, especially given the fact that Toby is a Holocaust survivor. I was also hinting at the idea of Rachel and Jacob being bashert, or destined, to find each other again.

There were some other reasons, obviously. I’m a trained screenwriter and I liked the visual elements of tween love (think: braces, bad hair, awkward growth spurts, etc). I wanted the story to have more of an innocent, Hallmark-style feel, and teenagers would have dragged the book into more angst and sex. I also knew this was going to be a shticky book—a specific type of Jewish humor that often utilizes physical elements—and I needed Rachel and Jacob at an age where a prank war would feel believable. But mainly, when I think about why I chose those two specific numbers, it all hearkens back to writing from a Jewish worldview.

I loved the inclusion of Chronic Fatigue Syndrome representation in The Matzah Ball, as it’s so rarely seen in traditionally published books. Do you think your own experience with it helped or hindered you at all when it came to exploring it in your writing and is it something you hope to continue featuring in your future works?

Chronic fatigue syndrome is a disease which has stolen almost all semblance of normalcy from my life. I will never have children. I will never work outside the home. I’m not able to just head out to lunch with friends, or visit a bookstore, or drive—because my body is so unreliable. I would be lying if I told that you writing with this disease is easy. It is not

One of the ways I make meaning from my struggles, however, is by giving voice to them. Even though it means putting my vulnerabilities on full display, I speak out because I know that many others living with chronic illness are silenced. Whether out of fear of reprisals from employers, or simply not wanting to get labeled as a malingerer, many people hide their diagnoses. My hope is that by making chronic illness mainstream—normalizing what is so often hidden from the world through books and movies—things will change for the better.

On that note, I absolutely plan to keep writing rom-coms that explore provocative topics.

You’ve been very open about your own journey with CFS and the struggles that can come with it. Do you have any advice for aspiring authors with CFS struggling to find a balance between wanting to write whilst struggling with symptoms?

Given that there are such an abundance of Christmas romances on the market, it was so refreshing to read one surrounding Hanukkah and Jewish culture. Do you have any romance recommendations for readers excited to read and support more Jewish books and authors after loving The Matzah Ball?

Absolutely! I loved The Intimacy Experiment by Rosie Danan, which is a steamy look at what happens when a Reform Rabbi and a porn star get together for synagogue programming. There’s also The Ex-Talk by Rachel Lynn Solomon, which features a Jewish heroine navigating a fake-relationship over the radio. As a husky momma, I would be remiss not to mention Alanna Martin, and her book Heart on Leash, which also features a Jewish heroine finding love (and huskies!) in Alaska. For fans of sweet romance, Stacey Agdern is also a favorite with her book, The History of Us. In the YA romance sphere, Marisa Kanter brought me back to my days in USY (United Synagogue Youth) with her book, What I Like About You.

Your next book, Mr. Perfect On Paper, sounds fabulous! Can you tell us any more about it?

Mr. Perfect on Paper is about a third-generation shadchanit, or matchmaker, named Dara Rabinowitz. Dara finds her private search for love thrust into the national spotlight when her bubbe, or grandmother, outs her list for “the Perfect Jewish husband” on national television. As a nationwide hunt ensues, Dara comes to realize that finding “Mr. Perfect on Paper” may mean giving up on Christopher Steadfast, the charming—and totally not Jewish—reporter following her story.

On the surface, it’s an interfaith romance. In reality, and to quote a Yiddishism here, it’s about how, “Man plans and God laughs.” It will be published in Fall 2022. Like all my books, it will tackle provocative topics in heartfelt and humorous ways. It’s also partly inspired by my own love story. I was a first-year rabbinical student, and deeply committed to my Judaism, when I fell in love with a non-Jewish man. 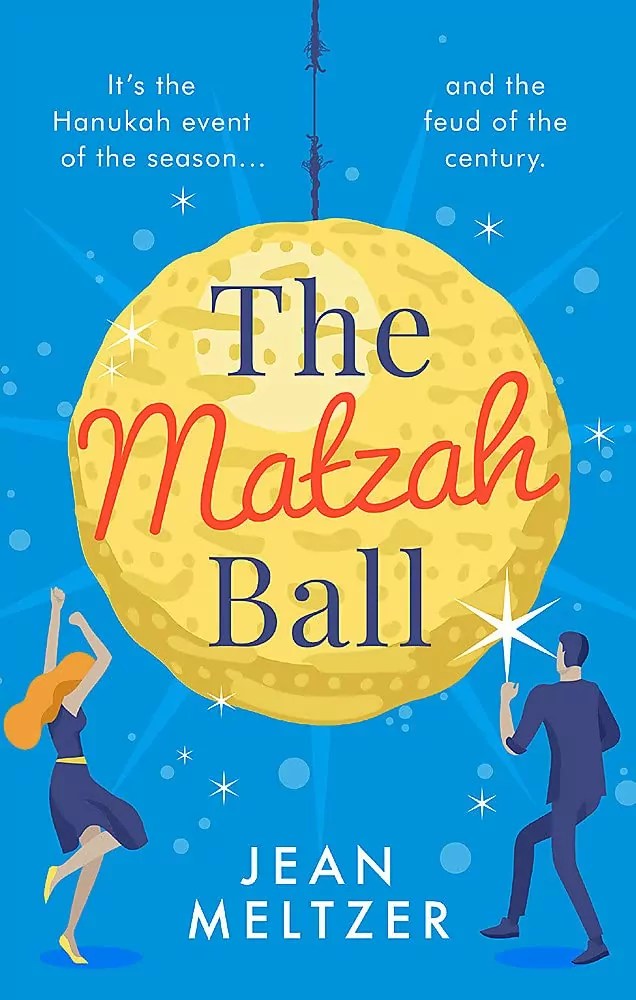 Get your copy of The Matzah Ball by Jean Meltzer here.

Closed: Win 1 of 10 copies of Battle of the Bands