I start my stories with a ‘what if?’ In this case it was ‘what if magic suddenly started working?’

Teenagers struggling with grief and loss meet necromancy? Sounds terrible, right? This is exactly what happens in Raising Hell.

Once upon a time, Ivy and her friends did a very stupid thing and now there’s a rift letting dark matter into the world. Dark matter that manifests as black magic which actually works. Now every teenager with access to the Internet is raising hell. Literally. Ivy’s doing her best to stem the tide, but her new job working school security barely pays the bills and there’s only so much one girl with a machete (and a cat possessed by her own dead grandmother) can do against the forces of evil. Now she’s facing a teenage goth with an attitude, her ruthless but frustratingly handsome brother, a dark cabal with a terrifying agenda and a potential zombie apocalypse…

We chatted with Bryony Pearce on her new YA novel, Raising Hell.

Raising Hell is such an interesting read! A world that teenagers can just start practicing necromancy is such a horrible thing to imagine, though. Where did the inspiration come from?

Like many writers, I start my stories with a ‘what if?’ In this case it was ‘what if magic suddenly started working?’ I wanted to restrict this ability to teens because this made things more interesting – suddenly you would have adults without power of their own, trying to use those teenagers to further their own agenda, to impose control. This raised interesting questions of what that might mean, both for the culture of Britain and for the teens themselves.

There is a lighter side of course: the idea of teens who don’t really think about consequences, being able to use magic to cheat on a test, or clear up a case of acne. There is a darker side too. Think of teens struggling with grief and loss, or mental health issues, or suffering from bullying or abuse, what might they do, given the chance to do anything at all?This ‘what if?’ gave me the chance to explore the issue of how we deal with grief and loss, but it also gave me the chance to play with the lighter side. To introduce characters such as Gran, the Talking Cat. To play with ghosts, zombies, hell-hounds and witches. 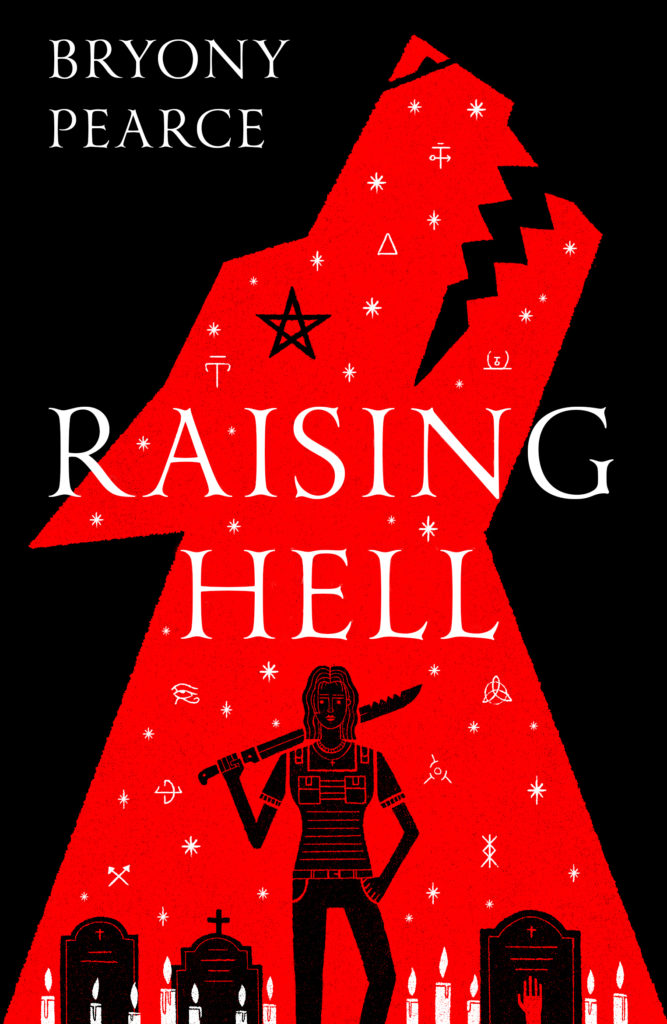 What was the research process like for Raising Hell? Is there one universal set of rules for necromancy and the symbols or did you have to pick a particular set of rules to follow in the book?

The magic in the novel is, in large part, driven by intention and desire. That is one of the reasons that it works best for teens, whose emotions and desires are so intense. But that means that in the novel I have all spells working, not just those from a certain culture or mythology. Spells cast by D&D players can be as effective as those cast by Wicca. Making that decision meant that I could mix and match my rules and spells.
Nevertheless, I didn’t make it all up. I did a lot of research. If you look at the book itself, for example, the chapter headings are all real sigils of protection and healing that I found while researching different forms of magic.

I found various spells that I wanted to use in various different religions. I mixed Christianity (exorcism and protection), with Wicca (signs and sigils and other spells, such as raising the dead), Druidic spells, spells from other countries and my own made-up Latin incantations. A few of the spells that I copied from real life are included in the story (such as the spell to raise the dead, or the golden net to stop bleeding), but in the case of the necromancy spell and a few others, I’ll be honest, I edited them, with some of my own lines and words … just in case. The last I need is a real-life zombie outbreak among my readers!

It’s very interesting that instead of having a protagonist who is one of the teenagers currently wreaking havoc by randomly doing spells at school, Ivy is more of a sisterly figure who has seen it all. Why did you choose this setting?

I wanted to start the novel in a school because school is such an intense microcosm of life. In school teenagers learn who they are and change into who they are going to be. They simultaneously have independence from parents and have teachers as authority figures. School is where emotions (and hormones) run highest. This is the setting where I thought teens would do the most damage given the chance. Imagine if you had the ability to cast spells as a teenager – what spells would you use? Who would you cast them on? Love spells? Spells to make you cleverer, or do your work for you? Spells to make you popular, or get you the lead role in the school play, win a race at sports day, or cheat at an exam?

I loved the idea of teaching becoming the most dangerous profession. Of hormonal students having incredible power and of course, of the idea that not all students would use magic frivolously. That teens, as well as adults, often have to deal with things that they shouldn’t. That grief and loss is as much a part of teen life as adult life and that these teens too would have access to magic. Ivy has all this to deal with, as well as the guilt that she feels having put all this power into the hands of teens who will only endanger themselves and others with it.

In Raising Hell, Ivy was working as a school security guard. If you were to work as one (in a normal world!), do you think you would have the instincts to figure out who is sneaking in forbidden items at school?

I’d like to think I’m good at reading people, but in actual fact I’d likely be terrible at this. I’m far too trusting. My children run rings around me. Even as a toddler, my son used to sneak contraband into his cot at night. I have one photo where he is entirely blue, having snuck an ink pad into his cot and spent half the night painting himself blue (and presumably chewing it). He looked like a deranged Smurf. I felt awful! My daughter once snuck her phone into her room and spent the entire night watching all the Twilight movies. All of them. Back-to-back. I had no idea. If I was in charge in Ivy’s world, chaos would soon ensue.

Is Raising Hell a stand-alone or the first book in a series?

Obviously Raising Hell ends open for a new story, and I have some really fun ideas for further adventures in Ivy’s world, exploring and deepening her connection with the hell hound (I intend to name him Fluffy), considering the impact of magic that has been left over after the closure of the rift (what other things has the evil political party been up to behind the scenes?), and of what desperate people will do to try and reopen it. Of course, if Ivy still has powers, then so does Elena, so what has happened to her?
But, publishing is a business and, as with everything my chance to write them will depend on sales.

I can’t BELIEVE, you’re making me look at my guilt pile! 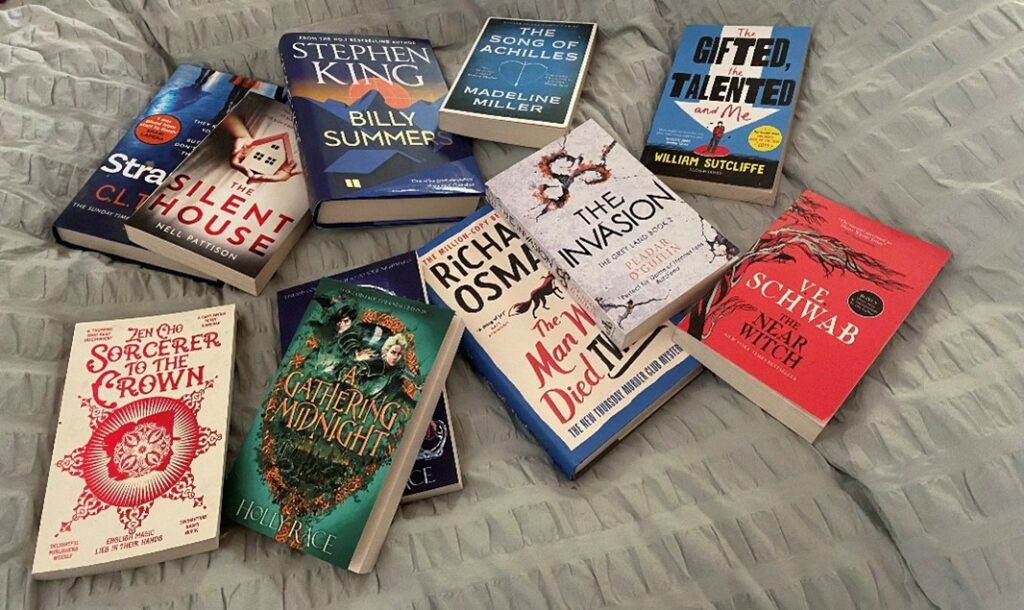 Yes, lots. I have this pile of physical books by my bed. I also have some YA ebooks I’m needing to get to: Brigid Kemmerer, Danielle Jawando, Sunyi Dean and Maureen Johnson.

I need to keep away from Waterstones and Amazon for a bit until I’ve caught up!

Get a copy of Raising Hell here.