If you’ve ever ventured into the world of playlists inspired by YA contemporary fiction novels before, then you’ve probably come across at least one of Troye Sivan’s songs.

From their relatable lyrics to their catchy melodies — and Troye’s status as an icon of LGBT pop — his music seems to attract a similar audience. And with his new EP, Troye Sivan has burst back onto the scene with another set of pop bangers.

So here are 10 YA book recommendations inspired by 10 of his songs! 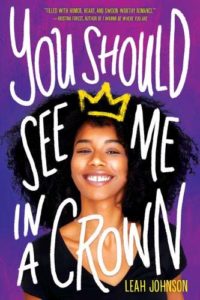 You Should See Me in a Crown by Leah Johnson

Liz Lighty has always believed she’s too black, too poor, too awkward to shine in her small, rich, prom-obsessed midwestern town. But it’s okay — Liz has a plan that will get her out of Campbell, Indiana, forever: attend the uber-elite Pennington College, play in their world-famous orchestra, and become a doctor.

But when the financial aid she was counting on unexpectedly falls through, Liz’s plans come crashing down . . . until she’s reminded of her school’s scholarship for prom king and queen. There’s nothing Liz wants to do less than endure a gauntlet of social media trolls, catty competitors, and humiliating public events, but despite her devastating fear of the spotlight she’s willing to do whatever it takes to get to Pennington.

The only thing that makes it halfway bearable is the new girl in school, Mack. She’s smart, funny, and just as much of an outsider as Liz. But Mack is also in the running for queen. Will falling for the competition keep Liz from her dreams . . . or make them come true? 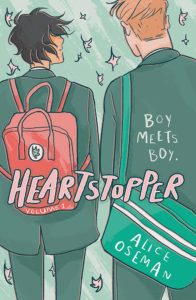 “Promise me you’ll
Hold my hand if I get scared now
Might tell you to
Take a second, baby, slow it down
You should know I, you should know I
(Yeah I bloom) I bloom just for you”

Charlie, a highly-strung, openly gay over-thinker, and Nick, a cheerful, soft-hearted rugby player, meet at a British all-boys grammar school. Friendship blooms quickly, but could there be something more…?

Charlie Spring is in Year 10 at Truham Grammar School for Boys. The past year hasn’t been too great, but at least he’s not being bullied anymore. Nick Nelson is in Year 11 and on the school rugby team. He’s heard a little about Charlie – the kid who was outed last year and bullied for a few months – but he’s never had the opportunity to talk to him.
They quickly become friends, and soon Charlie is falling hard for Nick, even though he doesn’t think he has a chance. But love works in surprising ways, and sometimes good things are waiting just around the corner… 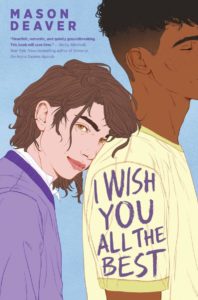 I Wish You All the Best by Mason Deaver

When Ben De Backer comes out to their parents as nonbinary, they’re thrown out of their house and forced to move in with their estranged older sister, Hannah, and her husband, Thomas, whom Ben has never even met. Struggling with an anxiety disorder compounded by their parents’ rejection, they come out only to Hannah, Thomas, and their therapist and try to keep a low profile in a new school.

But Ben’s attempts to survive the last half of senior year unnoticed are thwarted when Nathan Allan, a funny and charismatic student, decides to take Ben under his wing. As Ben and Nathan’s friendship grows, their feelings for each other begin to change, and what started as a disastrous turn of events looks like it might just be a chance to start a happier new life.

At turns heartbreaking and joyous, I Wish You All the Best is both a celebration of life, friendship, and love, and a shining example of hope in the face of adversity. 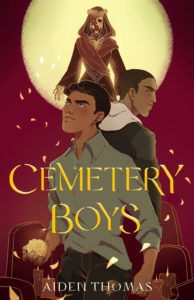 Yadriel has summoned a ghost, and now he can’t get rid of him.

When his traditional Latinx family has problems accepting his true gender, Yadriel becomes determined to prove himself a real brujo. With the help of his cousin and best friend Maritza, he performs the ritual himself, and then sets out to find the ghost of his murdered cousin and set it free.

However, the ghost he summons is actually Julian Diaz, the school’s resident bad boy, and Julian is not about to go quietly into death. He’s determined to find out what happened and tie off some loose ends before he leaves. Left with no choice, Yadriel agrees to help Julian, so that they can both get what they want. But the longer Yadriel spends with Julian, the less he wants to let him leave. 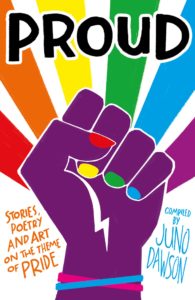 “Hey, my lil’ rager teenager
Tryna figure it out
Living a season of screaming
And turning it out”

A stirring, bold and moving anthology of stories and poetry by top LGBTQ+ YA authors and new talent, giving their unique responses to the broad theme of pride. Each story has an illustration by an artist identifying as part of the LGBTQ+ community. Compiled by Juno Dawson, author of THIS BOOK IS GAY and CLEAN.

A celebration of LGBTQ+ talent, PROUD is a thought-provoking, funny, emotional read. 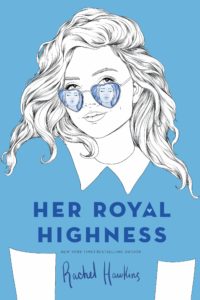 Her Royal Highness by Rachel Hawkins

“Leave this blue neighbourhood
Never knew loving could hurt this good, oh
And it drives me wild
‘Cause when you look like that
I’ve never ever wanted to be so bad”

Millie Quint is devastated when she discovers that her sort-of-best friend/sort-of-girlfriend has been kissing someone else. And because Millie cannot stand the thought of confronting her ex every day, she decides to apply for scholarships to boarding schools . . . the farther from Houston the better.

Millie can’t believe her luck when she’s accepted into one of the world’s most exclusive schools, located in the rolling highlands of Scotland. Everything about Scotland is different: the country is misty and green; the school is gorgeous, and the students think Americans are cute.

The only problem: Mille’s roommate Flora is a total princess.

At first, the girls can barely stand each other–Flora is both high-class and high-key–but before Millie knows it, she has another sort-of-best-friend/sort-of-girlfriend. Even though Princess Flora could be a new chapter in her love life, Millie knows the chances of happily ever afters are slim . . . after all, real life isn’t a fairy tale . . . or is it? 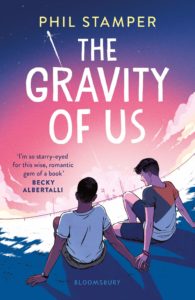 The Gravity of Us by Phil Stamper

“I’m still in love, and I say that because
I know how it seems between you and me
It hasn’t been easy, darlin’”

As a successful social media journalist with half a million followers, seventeen-year-old Cal is used to sharing his life online. But when his pilot father is selected for a highly publicized NASA mission to Mars, Cal and his family relocate from Brooklyn to Houston and are thrust into a media circus.

Amidst the chaos, Cal meets sensitive and mysterious Leon, another “Astrokid,” and finds himself falling head over heels—fast. As the frenzy around the mission grows, so does their connection. But when secrets about the program are uncovered, Cal must find a way to reveal the truth without hurting the people who have become most important to him.

Expertly capturing the thrill of first love and the self-doubt all teens feel, debut author Phil Stamper is a new talent to watch. 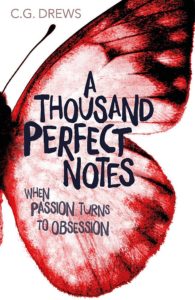 “The sun sets longer
Where I am from
Where dreams go to die..
Have you heard me on the radio?
Did you turn it up?
On your blown-out stereo
In suburbia”

An emotionally charged story about the power of dreams, and how passion can turn to obsession.
Beck hates his life. He hates his violent mother. He hates his home. Most of all, he hates the piano that his mother forces him to play hour after hour, day after day. He will never play as she did before illness ended her career and left her bitter and broken. But Beck is too scared to stand up to his mother, and tell her his true passion, which is composing his own music – because the least suggestion of rebellion on his part ends in violence.
When Beck meets August, a girl full of life, energy and laughter, love begins to awaken within him and he glimpses a way to escape his painful existence. But dare he reach for it?
Thrilling and powerfully written, this is an explosive debut for YA readers which tackles the dark topic of domestic abuse in an ultimately hopeful tale. 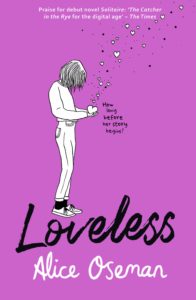 It was all sinking in. I’d never had a crush on anyone. No boys, no girls, not a single person I had ever met. What did that mean?

Georgia has never been in love, never kissed anyone, never even had a crush – but as a fanfic-obsessed romantic she’s sure she’ll find her person one day.

As she starts university with her best friends, Pip and Jason, in a whole new town far from home, Georgia’s ready to find romance, and with her outgoing roommate on her side and a place in the Shakespeare Society, her ‘teenage dream’ is in sight.

But when her romance plan wreaks havoc amongst her friends, Georgia ends up in her own comedy of errors, and she starts to question why love seems so easy for other people but not for her. With new terms thrown at her – asexual, aromantic – Georgia is more uncertain about her feelings than ever.

This wise, warm and witty story of identity and self-acceptance sees Alice Oseman on towering form as Georgia and her friends discover that true love isn’t limited to romance. 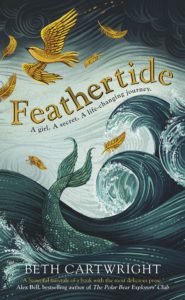 “I’m tired of the city, scream if you’re with me
If I’m gonna die, let’s die somewhere pretty, ah, ah-ah
Sad in the summer, city needs a mother
If I’m gonna waste my time, then it’s time to go
Take yourself home”

Born covered in the feathers of a bird, and kept hidden in a crumbling house full of secrets, Marea has always known she was different, but never known why. And so to find answers, she goes in search of the father she has never met.

The hunt leads her to the City of Murmurs, a place of mermaids and mystery, where jars of swirling mist are carried through the streets by the broken-hearted.

And Marea will never forget what she learns there.

5 new songs that I discovered this week