"I think there’s something really interesting about turning paper, which people usually think of as fragile and easily destroyed, into something fearsome and powerful."

Highly inventive, with intricate world building, intriguing characters and an action-packed plot, Rebel Skies, the magical debut YA fantasy from Anne Sei Lin, is a must read for fantasy fans old and new. To celebrate its release, we had the pleasure of chatting with Ann all about this exciting start to what’s set to be an epic new fantasy series.

Hi Ann, we’re so happy to have you on the site today to celebrate the release of your debut YA fantasy, Rebel Skies! For readers just discovering this magical new story, how would you best describe it to them?

In longer words: Rebel Skies is about one girl’s journey to save her best friend. Kurara has always known that she can make paper dance and origami animals move. What she doesn’t know is that those who can wield paper magic are prized by the empire for their connection to the wild and ferocious paper spirits that terrorize the land. When her best friend is injured in an attack, she has to learn how to fully utilise her power in order to save him, and in doing so find out the truth behind just what these paper spirits are.

Can you tell us a little about how the story of Rebel Skies and its characters came about?

For me, character, story, and world are always inextricably linked; it’s hard to mention one without the other. I always think of characters as threads in the moving tapestry of the world – a place with prejudices, conflicts, and injustices that have existed before the character was born and will probably continue to exist long after they die.

So when I sat down to create the characters of Rebel Skies, the most important thing for me was in understanding how they struggle against the world they’ve been born into. When writing Kurara, I wanted to write about someone who starts off not really knowing how to navigate society or where they fit. I think that’s true for a lot of young people coming of age. Perhaps they haven’t been sheltered in a floating banqueting hall for most of their life like Kurara, but I think the struggle to find your place in the world is a universal one.

From origami magic and killer paper dragons to floating whale clouds and flying ships, the magic system and world of Rebel Skies was inspired! How did you come up with it all?

The world of Rebel Skies was born from a number of obsessions. It was born from my desire to see more Asian Fantasy books, my obsession with paper, my interest in how empires operate and maintain power, and a fascination for the skies. At the forefront of the world is the origami magic. From the paper spirits to the people who can wield paper as weapons, the world of Rebel Skies is a place filled with paper! Paper magic features quite a bit in Asian mythology and culture, and can be found in many religions from Shintoism to Taoisim to Buddhism. I’ve always been fascinated by paper. I think there’s something really interesting about turning paper, which people usually think of as fragile and easily destroyed, into something fearsome and powerful.

There are some major twists and turns throughout the book, as well as some incredibly emotional moments. Without any spoilers, is there a scene you’re most looking forward to hearing readers reactions for?

I can’t say too much, but the scene I’m most looking forward to involves lots of fire. (It’s also the scene I’m dreading the most, because I think readers might yell at me for it too!)

If you could craft your own shikigami, what form would you like it to take?

That’s a tough one! I would honestly like something big enough to ride. Maybe a bear? Or a huge wolf? Fujiwa (one of the characters in Rebel Skies) has a giant paper tiger that he rides. I’d love to be able to do that too. Since I don’t drive, it would be very convenient if I could just roll up to the shops on the back of a huge paper beast!

Lastly, is there anything you can tell us about what we can expect from book two?

Book two will answer a lot of questions brought up in Book one. We’ll dive a bit more into Kurara’s past as well as questions about just what these paper beasts are and where they come from. I hope that readers will stick around for the excitement! 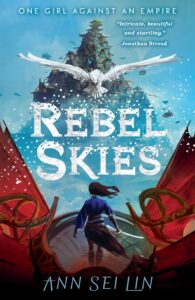 Get your copy of Rebel Skies by Ann Sei Lin here.