This year is the 20th anniversary of 'Harry Potter and the Philosopher’s Stone,' and London is celebrating by displaying the character wands.

Believe it or not, Harry Potter and the Philosopher’s Stone was released 20 years ago this year. All over the world, there are different celebrations in relation to the anniversary, such as special screenings.

But London has opted to honour the film in a different way — by creating a walkway of the main characters’ wands in Leicester Square. The world premiere was held in Leicester Square in 2001, so it seems fitting for the tribute to be there.

The walkway in Leicester Square Gardens will include nine character wands from the Harry Potter and the Fantastic Beasts franchise. They will be lit up at 6 pm for two and a half hours. They’ll be on display from 13th October to 25th October. 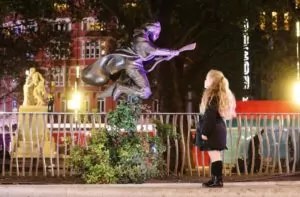 The wands will stand in Leicester Square beside the statue already up of Harry Potter. The statue has been in the Square for almost a year now and is there to celebrate London’s film history. It joins other major British film characters such as Paddington Bear and Bugs Bunny.

Warner Bros. have also promised fans that the wands will travel around the UK next year, in the run-up to the new Fantastic Beasts film. The wands will go on tour to Reading, Birmingham, Stoke and Hull.

Who else would love to be able to see these fifteen-foot wands in real life?