To celebrate the release of ‘Sing Street’ on Blu-ray and DVD we caught up with the stars of the film Mark McKenna and Ferdia Walsh-Peelo. ‘Sing Street’ is set in 1980s Dublin and tells the story of Conor, a young boy who starts a band to impress the girl of his dreams. It features an amazing soundtrack including original music and 80s classics. Mark and Ferdia share all the details about being on set, their opinions on double denim and their uncanny resemblance to Jared Leto.

How would you summarise the film?

Ferdia: How would we summarise the film? Coming of age, boy starts band because of girl, its romantic.

Ferdia: Find your voice, that was so deep.

Mark: What was that one that I said ages ago? The sound of 15, put that as your summary.

How did you get involved with ‘Sing Street’, what was the casting process like?

Ferdia: I went to an open casting, well we both went to open castings which is really crazy. So we queued up in Dublin…

Mark: For a few hours to do a two second audition.

Ferdia: I went in and played a song for the camera and then got cast within a month. I came back in for about two more auditions and I did a screen test where I auditioned with loads of different girls. Apparently I got it a couple of weeks before that but nobody told me so I was just like “shit did I get it or not, why are they bringing me in to read with loads of different girls”. Then it was a phone call, I was out busking in an area that’s near Dublin and I was really happy.

Mark: I remember when I got cast the first thing I did was check my wallet, to see how much money I had at the time.

Mark: I was in a coffee shop and I looked to my mum and said “I have 10 euros at the moment, hopefully that changes”.

The film has been described as you said, as coming of age – has it felt like that for you both individually as people and as actors?

Ferdia: Yea 100%. ‘Sing Street’ was only an eight week shoot, but I developed two years of acting skills in those eight weeks. My first week on set was quite tough because I didn’t know how to act, I was frozen in front of the camera. But after that it just took a couple of days of working with Aiden and Maria Doyle Kennedy, and all these great actors. (And Jack Reynor of course!) By the end of the week I got the hang of it – by the end of the shoot I was questioning John’s direction, becoming really cheeky.

Mark: I remember on my first day I said a line quite sarcastically to Ben, and then John said “no, he’s not supposed to be a sarcastic character, he’s supposed to be really serious and to the point”. And I said “so why’d you cast me then, I did this completely different in my audition”. We did a few more takes and you just kind of remember that okay, he’s very serious and to the point. So then every other scene you do, you just take into account what John tells you earlier on – you just kind of become the character, become an actor.

What was it like to be on the set, did you feel like you were in the 80s?

Ferdia: It was pretty fun…it felt like we were in the 80s.

Mark: Anything modern they just didn’t let us near, even the cars and when we were doing scenes outside – they blocked off the roads so no cars could drive through. If a car did need to drive through, they’d be like “okay just make it quick”. So they’d go through and they’d have really old vintage cars on the roads…

Ferdia: Like a big 80s bus and everything, when we were on the train they re-did a carriage with 80s advertisements on it and everything. It felt really cool.

Mark: We actually closed down the train line for the day. I remember one of my friends said “I was trying to go into town and the train line was closed” and I said “oh, was it? That’s weird!”

What are your favourite songs from the 80s, do you like 80s music?

Ferdia: I love ‘You Make My Dreams Come True’ by Hall & Oates.

Mark: Anything by Prince and anything by The Police as well, and… The Blue Nile, they have a song called ‘The Downtown Lights’ and it’s a very good song. Anything really.

So most of the cast are relatively new to acting on screen, it’s pretty much everyone’s first time. Did that have an impact on the production, as you were all starting out together?

Ferdia: Yes because we all sucked. It took us like three days to do one scene, but John is unbelievable at working with people who just don’t have a clue how to act. So we were wondering why he brought that upon himself… 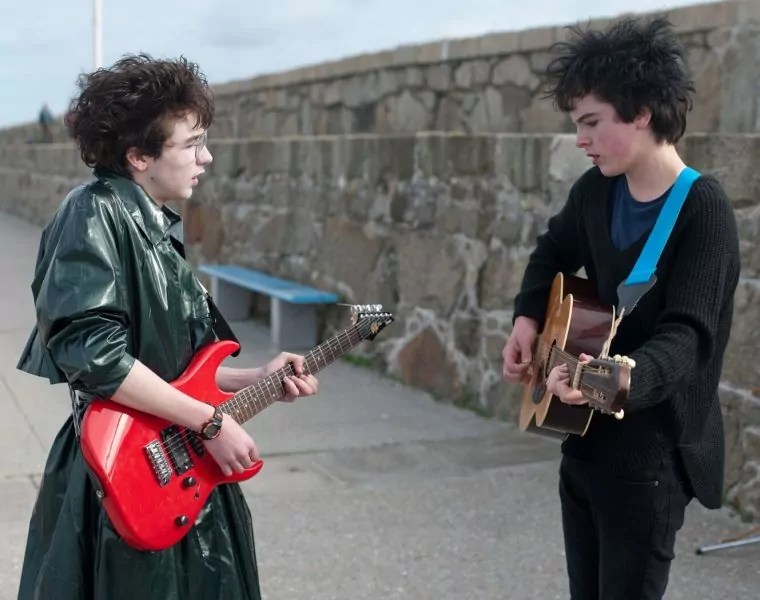 If there was one thing you’d like the viewers to take away from the film, what would it be and why?

Mark: I’m just going to say what I always say, just to be yourself really and don’t be afraid of getting being called gay because you’re wearing something that someone else doesn’t wear. Like when you see teenage boys now and they’re like “oh wearing skinny jeans is gay” – but wearing skinny tracksuit Adidas bottoms is okay, when they’re just the same thing. But yeah, like I don’t know just don’t think too much about what people are. Just think about what’s within your control and what you’re happy with really.

Ferdia: Take away from the film? I took away double denim, I really like it I think it’s going to come back! Hopefully we’re a bit of an inspiration as well, you know kind of to go out and do what…

Mark: Go and steal you Grandad’s boat and go to London.

Ferdia: That’s what my Grandad said to me actually, he said, Tthere are loads of 15-year olds now going out on boats to London.” And I said, “No there aren’t Grandad.”

Where would you like your careers to go next? Would you like to go down more of an acting or music path, or a bit of both?

Mark: Both! I’d like to be one of those cheeky actors, like Ewan McGregor where they get big with acting and then say, “Oh what am I going to do with all this money, oh I know… make an album!”

Ferdia: It’s tricky to do both. I obviously wanted to do both but it’s hard unless you get yourself to a point where you’re Jared Leto, and you can just do whatever the hell you want.

Mark: When we’re accepting our Oscars we’ll do what he did and just promote his own band, I might never get to that point. But it doesn’t matter, in some ways the music industry is so hard and I don’t want it to ruin music for me. I know loads of musicians who it is just totally ruined for, the whole industry is nuts and it’s much harder than acting. I wouldn’t like to be the kind of musician who does a four-year-long tour, I couldn’t handle four years of going to a city for three days then going somewhere else. Basically be Jared Leto… basically I’m an Irish Jared Leto. Everyone’s thinking it and I’m just saying it.

Mark: Slightly? Far better. I’m like Johnny Depp’s twin, the only way that you could tell us apart is that I’m better looking than Johnny Depp.

Ferdia: If Jared Leto had bigger pecs he’d be me.

‘Sing Street’ is available now in the US and the UK, courtesy of Lionsgate UK Home Entertainment.