Ariana Grande will take to Manchester today along with a dazzling line up of big name artists including the likes of Little Mix, Miley Cyrus and Justin Bieber as they perform at ‘One Love Manchester’ to raise money for the ‘We Love Manchester Emergency Fund’ to benefit the victims of the Manchester Attacks which took place at the MEN arena during Ariana’s ‘Dangerous Woman’ show.

You can watch the live stream below and join us back here at 6:30pm GMT/1:30PM ET to keep up to date with as we bring you live coverage of behind-the-scenes, including interview snippets, social media content and keeping you up to date with what’s going on. Find out more info about the concert here.

Donate to the We Love Manchester Emergency Fund

A policeman skipping with young fans at #OneLoveManchester. This is the moment I broke. pic.twitter.com/F7Iw871WoQ

i'm sobbing watching #OneLoveManchester Im SO proud of @ArianaGrande and the other artists there, and Manchester for fighting fear with LOVE

In Manchester now, London today and always in our country: We stand together & united against those who seek to divide us #OneLoveManchester pic.twitter.com/HMmb5D8l9b

This concert is for them #OneLoveManchester pic.twitter.com/jGH0LiOHkh

Niall is watching the show

Niall is watching the show with so much enthusiam! #OneLoveManchester pic.twitter.com/h7f0SmlzzD

Niall Horan went from auditioning in FRONT of @KatyPerry , to sharing the stage with her tonight!SO PROUD @NiallOfficial #OneLoveManchester pic.twitter.com/ZWdXdozlh9

In hospital last night. In the sunshine happy with Pharrell tonight. It's @eviemills11 #onelovemanchester pic.twitter.com/NEOZ7h43jA

Evie has had a day pass from hospital especially to attend the show.

Celebrities around the world are watching and sending their love

You don't have to be there to feel the love! Such a moving and beautiful event. We stand so much stronger together #OneLoveManchester

Bawling my eyes out watching the #OneLoveManchester livestream. SO BEAUTIFUL!!!!

They come, they come – to build a wall between us, but you know they won't win ❤️ @ArianaGrande & @MileyCyrus doing a powerful cover pic.twitter.com/kPAxTxn4i0

20:40
All the acts are getting on like a house on fire backstage…

The unity of the artists makes me so proud #OneLoveManchester pic.twitter.com/314yFwXvLw

Some amazing images from the concert

Im not crying you are #OneLoveManchester pic.twitter.com/PJwFN9mz6S

19:35
Miley Cyrus watching Pharell from side stage is everything.

i see the beauty @MileyCyrus enjoying the concert of pharrell☮️ #OneLoveManchester pic.twitter.com/xu0lOw2ePq

These are the signs that can be seen throughout the entire crowd to honour those lost.
19:10
There’s love radiating between the artists, check out Robbie Williams wearing a Justin Bieber hoodie!

18:58
Manchester falls silence in memoriam of those lost.

50,000 people stand silent to remember those lost and affected by the attacks on May 22nd #OneLoveManchester pic.twitter.com/oZv2upjai8

The livestream has now started. Press play on the video above to watch. 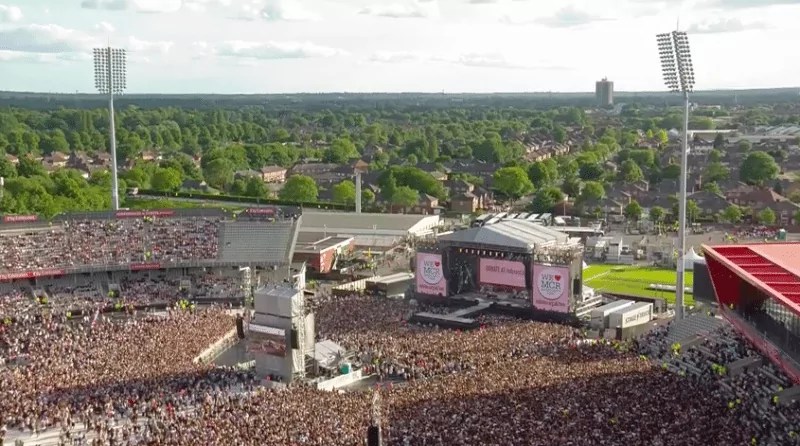 Chris Martin joins BBC Radio 1 to talk about the concert. “people are awesome for just coming out and doing this.”
18:40

The Mayor of Manchester has asked for the crowds to show support for the emergency services who responded to the incident. Lots of fans, including Evie aged 14, were given a day pass especially to attend the concert. A one minute silence is now being held, led by the Bishop of Manchester.

This moving video has been released where the survivors were applauded as they entered the stadium….

Fans who survived at the Manchester attack have been applauded as they went in the stadium♡ #OneLoveMachester pic.twitter.com/Kpo8UmKmZP

Scott Mills is joined by the rest of the radio team as the begin their live coverage of the concert now. Listen here for the pre show

An honour to be here today. Join me, @jowhiley and @PhilWilliams from 6.30pm on @BBCR1 @ @BBCRadio2 and @bbcfivelive #onelovemanchester pic.twitter.com/6EHXjTKwKw

Photos and videos of the crowd tonight are truly breathtaking…

i love this so much #OneLoveManchester pic.twitter.com/lNfRoZLwZg

Video of the stadium and crowd. There are over 50,000 people expected to attend the show. #OneLoveManchester pic.twitter.com/wLVFGTBj47

Catch the pre-show on BBC Radio 1 on 25 minutes for behind the scenes and commentary. There’s also a buildup show with music from the artists here

Black Eyed Peas are here to ask you “Where is the Love?”

Personally, I'm excited for @bep – Where is the Love is the perfect song for tonight #OneLoveManchester pic.twitter.com/VoaqvhsiR1

17:40
The British Red Cross will be in attendance of the event to provide practical & emotional support, proving that this is not just a concert, but a place of unity and support

Red Cross volunteers will be on-hand at the #OneLoveManchester concert to provide practical & emotional support to people at the show. pic.twitter.com/irQfC8Kvxo

A rumoured setlist is suggesting that Oasis will reunite especially for tonight on stage to sing ‘Don’t Look Back in Anger’.

Miley and Ariana were spotted rehearsing together, so it’s looking likely that they will perform their infamous cover of ‘Don’t Dream It’s Over’

14:51
It’s been announced that Uber will make a donation equal to all Uber fares taken to and from the One Love Manchester concert to the British Red Cross Society for its We Love Manchester Emergency Fund.

Miley Cyrus has arrived and seems to be so happy to be here in the UK to perform in Manchester.

There’s a Snapchat filter at the venue for concertgoers.

The final preparations are underway and Gary Barlow has posted this snap of Ariana and Take That at the venue.

Some of the artists including Ariana have been spotted doing Soundcheck ahead of tonight’s gig
https://twitter.com/DailyArianaNews/status/871357361138483200

Wonder Woman knocks it out of the park: our review