Harry Styles is Pleasing fans with tease of cosmetics brand

Harry Styles has surprised fans with a tease of his upcoming cosmetics line, ‘Pleasing’.

Is there anything Harry Styles can’t do? A musician, an actor, a model and now the owner of a cosmetics and fragrance brand.

Fans of the One Direction star became suspicious in the summer that he was launching his own cosmetics brand after he was listed as Director of a company called ‘Pleasing’. The wait must almost be over as billboards have been spotted across London advertising the brand. There have also been advertisements spotted around the US. 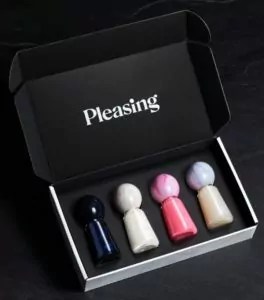 The first product that has been teased by Styles and his team is a set of four beautiful nail polishes. From the photos that have been released, the colours so far are dark blue, pearly white, quite a barbie colour of pink and a neutral tone of beige. It’s been labelled as ‘The Perfect Polish Kit’ and retails at $65, so the website for the brand says.

HARRY STYLES IS DROPPING A COSMETIC BRAND WHICH JAS NAIL POLISH AND COSMETICS WE ALWAYS WINpic.twitter.com/qSeUD0FKqk

‘Pleasing’ have also since become active on their social media, following Harry Styles himself and his own HQ. This very obviously hinted that it was his own brand, and if that wasn’t enough, a teaser has also come out of Styles flaunting his own nail polish showing fans what the colours are like.

Imagine how cool it will be when somebody asks: ‘What are you wearing?’ and you can respond: ‘ ‘Pleasing’ by Harry Styles’. We are so excited to see what else is to come for ‘Pleasing’! Will you be purchasing any cosmetics or fragrances from the brand? We’ll definitely be purchasing some!

Our Violent Ends by Chloe Gong spoilers but out of context