Harry Styles is spreading the love by announcing mini residences for his Love on Tour 2022!

Harry Styles is spreading the love by announcing mini residences for his Love on Tour 2022! The ‘As It Was’ singer will be hitting the road again in North America. Beginning this August in Toronto where he will spend 2 nights at the Scotiabank Arena alongside Madi Diaz.

From Toronto he will travel to Austin, Texas where he and Gabriels will be at the Moody Center for 5 nights, then he’s off to Chicago, Illinois for another 5 nights at the United Center with Jessie Ware.

Harry will take New York and Los Angeles by storm, playing a whopping 10 shows at each respective venue.

Beginning this August in New York City at Madison Square Garden, the ‘As It Was’ singer will be performing at the iconic venue and bring his pal, collaborator, crazy talented and influential musician Blood Orange 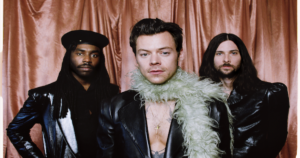 Following New York, he will head to Los Angeles and have another ten nights (including a Halloween show!) at the Forum with bluegrass rocker Ben Harper.

Harry has been quoted saying he had the most fun creating this album and these mini residences seems like the perfect way to cherish, celebrate, and love his newest work.

Tickets are on sale May 25th at 12 pm local time, click here to register for pre-sale early access.

Christine Pillainayagam on the inclusion of music in her YA debut, Ellie Pillai is Brown