Just hear us out.

In a new interview with Forbes, Louis Tomlinson speaks about social media keeps him connected with his fans (all 33.4 million of them, if you’re counting). Specifically, he mentions how social media allows him to get “feedback from the fans that they also like [the lyrics he writes]” and how it “makes us feel even more connected and even more on the same page.”

“The amazing thing for me,” Louis says, “is [social media] gives me a chance to have a real, genuine, direct relationship with my fans.”

The artist he most admires when it comes to maintaining a personal relationship with fans is, unsurprisingly, Taylor Swift. You’d be hardpressed to find someone as famous as Taylor who does a better job making their fans feel personally loved, appreciated, and acknowledged.

“She is f**king amazing with her fans,” Louis continues. “[She] does these listening parties and brings fans to the house, the involvement of the fans is never-ending.”

Taylor is famous for her “secret sessions,” where she invites superfans into her homes around the world (Los Angeles, Nashville, Rhode Island, London, etc.) and allows them to be the first people in the world to hear her new music.

“Nobody knows better than these people,” Louis says about fans.

Rehearsals for Madrid are going really well. Proper excited to get on stage next week!

Taylor also hosts unique meet-and-greets at her concerts, where fans are hand-selected by her team during the show and invited to meet her afterward. No one can buy their way in, which is another decision Louis relates to. In December 2017, he tweeted, “I was thinking about doing some kind of competitions to make [meet-and-greets] fair. It shouldn’t be about who has the most money soz for preaching.” Louis hasn’t gone on tour yet, but it feels safe to assume he may take a page out of Taylor’s book here.

Louis’s fanbase of “Louies” is one of the largest, most intense fanbases in popular music today, consisting of a core of post-One Direction fans coupled with new solo-Louis fans. The relationship between Louis and Louies is symbiotic and two-sided, something Louis never fails to acknowledge.

What an incredibly loyal fan base I have. Thank you so much!

Because of this unique fan-to-artist relationship he’s fostered over his nine years in the industry, I can’t think of a more fitting person to adopt Taylor’s listening parties strategy when his debut solo album finally drops. It wouldn’t matter how much money you have, how many of his singles you’ve purchased, or how long you’ve been a fan. Louis, like Taylor, would make it fair for all, and these fans would not only get the kind of personal interaction with Louis they’ve dreamed of but also offer him the real and honest feedback he looks for from them.

I’ve launched a “petition” (and I use that word loosely as it’s more of a gentle request) to Louis’s two labels asking them to consider organizing future listening parties. Add your signature to mine and let’s make this happen! 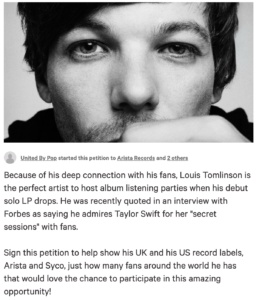 MAX chats about Love Me Less and upcoming shows