8 years ago, I first saw this video on YouTube. The video was of Jeff Dunham, a ventriloquist comedian from America with his controversial character Achmed the  Dead Terrorist. After watching this video, I continued watching his other sketches which featured other characters such as Bubba J, Peanut, José Jalapeño and Walter.

When tickets went on sale last October and I saw that he would be coming to Cardiff, I knew this was an opportunity I couldn’t miss. Tickets sold out pretty fast, but I was lucky enough to get some and I was only 4 rows from the front, too! Fast forward to May 2017 and it was finally time to see Jeff Dunham live.

When I contacted St Davids Hall I was quite surprised to be told that the show started at 5pm and finished at 7:30pm. Considering the type of show it would be, I thought this was pretty early.  I arrived at the venue about half hour before and the place was full of people. The merchandise stall was practically empty and people were in a queue waiting for the doors to open. Finally, they let us inside where there was a huge screen which displayed numerous facts about Jeff and some hilarious ‘Dear Walter’ letters.  We got to see some pretty awesome unseen photos too, like this one of Achmed. 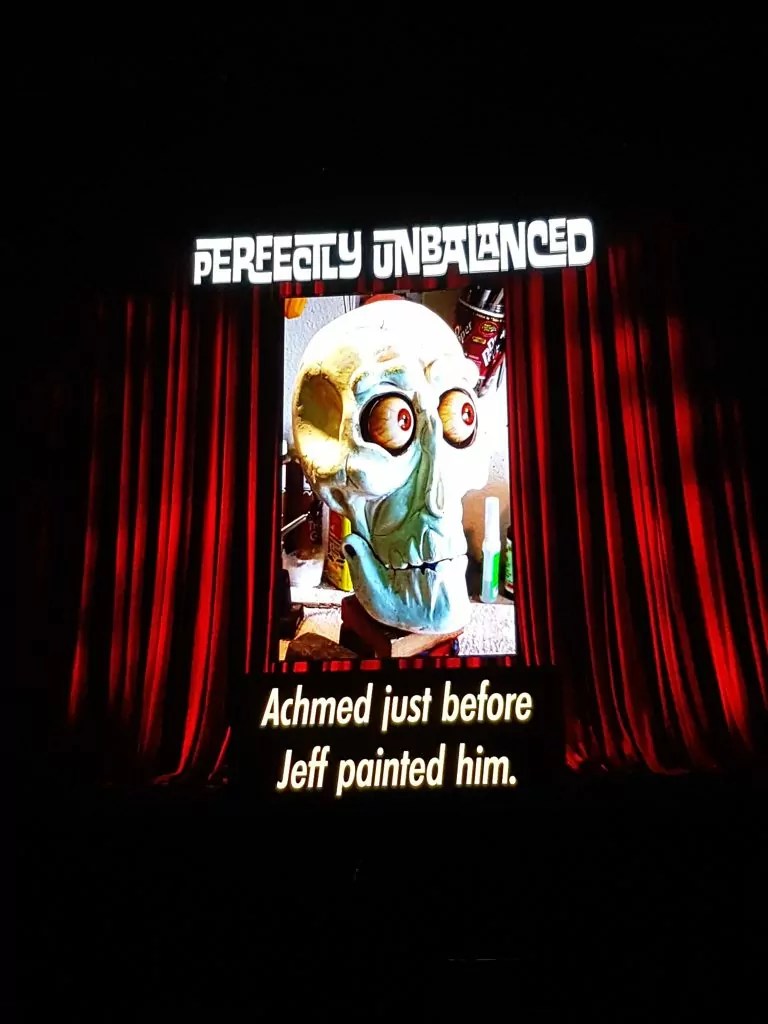 After waiting about 20 minutes, Jeff finally made in on stage. There had been some technical difficulties at first but he made up for it with his set. The first 40 minutes or so was a stand-up routine. Before starting off his routine, he wanted to clear a few things up with the crowd in terms of terminology. As Jeff is American, he wanted to make sure we were familiar with certain words and references he was going to be using later on in the set.

This was Jeff’s opening night of his UK tour and at times, this showed. Losing his train of thought on a few occasions, he managed to get back on track and tie in his material. He explained to the Cardiff audience that his Dublin date will be a Netflix special. What we were seeing was basically the airing of it before anyone else gets to see it, which was pretty cool. He’ll be filming that later this month, so keep an eye out for that! 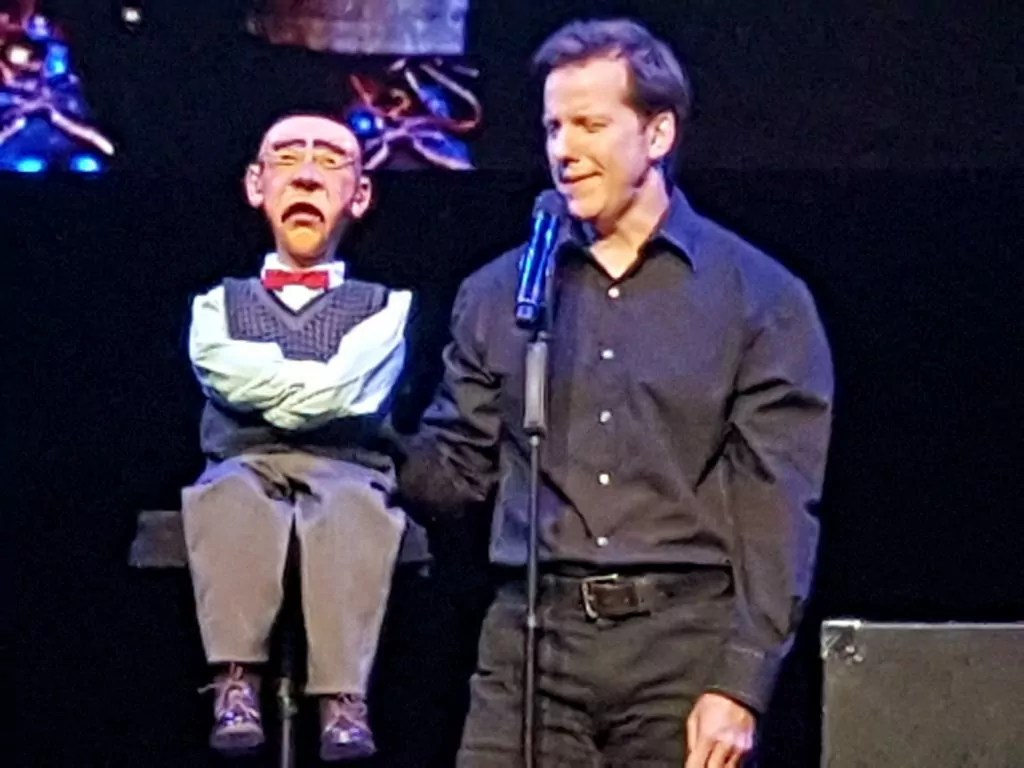 Whilst Jeff was doing his stand up, I couldn’t keep my eyes off the boxes behind him knowing that they included the characters that I have waited so long to see. Jeff opened the show with Walter,  our favourite grumpy guy.  He had the audience in stitches with his sarcasm and his very un-PC comments. Jeff had previously spoken about how he was adopted and of course, this came under much scrutiny from Walter.

Following on from him, Jeff introduced us to the ‘Irish baby’ that he and his wife had adopted named Séamus. Then came characters that we all know and love, Bubba J followed by one my favourites, Achmed the Dead Terrorist. 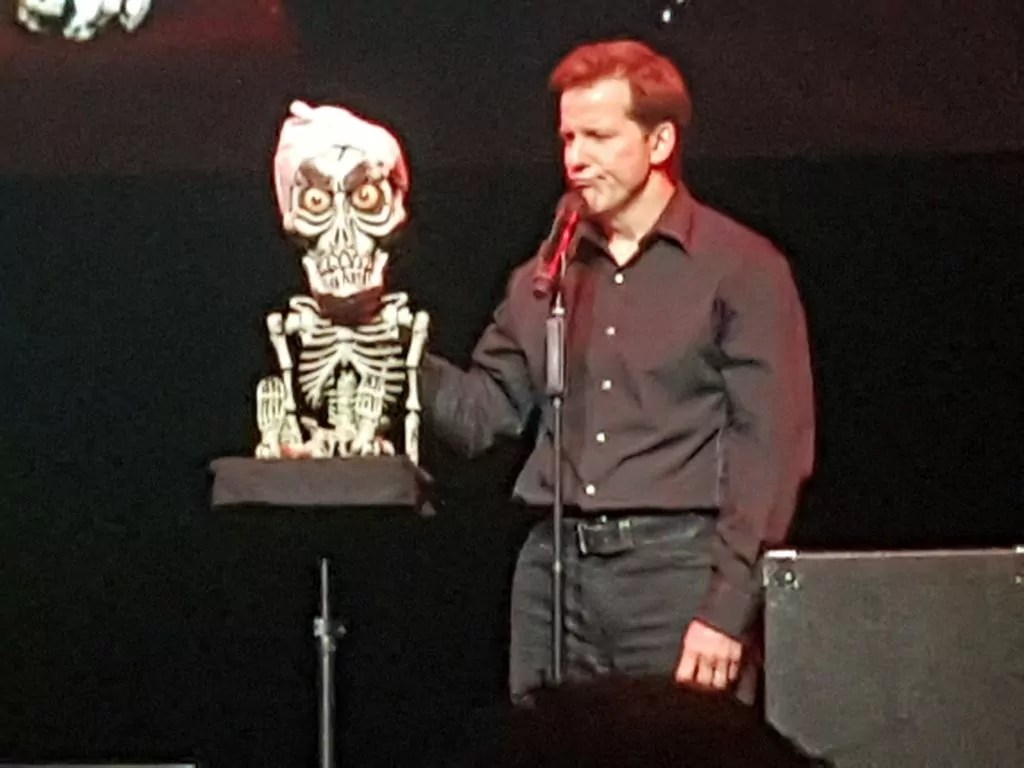 I couldn’t believe that 8 years after I had seen the video of him on YouTube that I was actually seeing this show for real, and seeing the puppets up close was amazing. Not only that, but the amount of talent Jeff has is incredible. He finished the show with Peanut who he had a bit of a ‘tussle’ with on stage which resulted in his hair falling out which whether it was intended to happen or not was absolutely hilarious.

What was wrong with the show?

Although I loved the show and had a great time, I was really disappointed that José Jalapeño didn’t make an appearance. I really expected him to do a bit with him alongside Peanut. When Jeff left the stage and came back on briefly to bow to the crowd, I had hoped he was going to do an encore and include José, but sadly not. Whether he will include him on any of the other dates I’m not sure. If he does, I will be disappointed that he never included him on his Cardiff date. BRING BACK JOSÉ!!