Louis Tomlinson lost a bet with a fan over FIFA

The British singer lost a bet with a fan to sing one of his songs, which he didn’t, but Twitter had too much fun!

After the massive success of his sophomore album, Faith In The Future, which also topped the UK Albums Charts not even a month after its release after a week-long battle with Bruce Springsteen, the Punk Rockstar Louis Tomlinson, with a broken arm, was ready to celebrate the achievement with his fans. The British heartthrob had organized a bunch of album signings, starting in London on December 5th. 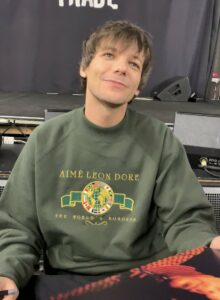 Tomlinson is known for his co-dependent relationship with his fans, who call themselves ‘Louies.’ Even with a broken arm, freshly out of surgery, the singer had an amazing time talking to his fans, asking for their favorite songs, and having fun with them. One of his fans made a bet with Tomlinson which became quite a big deal in the fandom!

Louis and a fan agreeing on a bet wherein if France wins, he’ll perform Angels Fly at ONO, and if England wins, they will wear an England shirt at one of his gigs!

Knowing how big a football fan Louis Tomlinson is, his fan made a bet for him to sing his song ‘Angels Fly’ from Faith In The Future if England loses the game against France on his upcoming One Night Only on December 14th. “I ain’t got much time to rehearse so we better win that game,” Tomlinson hoped for his home team to win.

But alas! England lost the match and the Louies had a field day on Twitter! A user tweeted, “Louis trying to hide the whole existence of the angels fly bet.”

louis trying to hide the whole existence of the angels fly bet pic.twitter.com/7Oecy9S4fk

Another joked on his potential of forgetting his own lyrics tweeting, “Louis searching for angels fly lyrics on the internet after England lost last night.”

And to no surprise, some even predicted that Tomlinson would not perform the song at the ONO. AND HE ACTUALLY DID NOT!! (*cries in a fellow betrayed Louie*) Although, Louis promised his fans that he has some “big plans” for the songs that were not in the setlist of his final few gigs of the year in his latest Instagram reel. But still, his fans are worried that ‘Angels Fly’ would get the same treatment as ‘Perfect Now’ from his first album Walls had gotten: wiped off the tour.

Louis is currently healing from his arm surgery after he broke it into three pieces right after releasing his album. He has the Faith In The Future World Tour set to start in May with the North American leg! Until then we can only hope for Louis’ speedy recovery and better treatment to ‘Angels Fly’!

Drishti is a brown girl with hazel eyes who lives for the art and the drama in everything. She writes, sings, draws, and dedicates most of her life to music because she can't afford therapy. She can talk for hours about things and people she loves, especially Harry Styles, Louis Tomlinson, and Michael Jackson! She can also write a thesis on how their music saved her!