Fans across the world unite to celebrate the 10 year anniversary of the beloved boy band.

Boy bands may come and go, separate and reunite, but there’s something magical about big anniversaries. In the case of One Direction, it will be a decade since 5 boys were put together in a band at the X-Factor. While each of them has gone on to solo careers after their 2015 announced hiatus, fans are rightfully nostalgic for 5 jam-packed years of fun, good music, and a bond that’s not easily forgotten.

While the pandemic may limit traditional celebrations, the One Direction fandom has never been stopped. Fans across the world are coming together on social media, particularly Twitter, to celebrate 10 years with the #1DecadeTogether fan project.

There are many different layers to the project, primarily run by @1dstalker, but in true camaraderie, several other update and fan accounts have joined in on the week-long festivities.

Solo streaming parties began on July 16th, ending with a game and giveaway on the 17th. They were followed by a series of 1d inspired Tik Tok challenges on the 18th.

To show the vast impact of One Direction throughout the world, on July 19th, a virtual map was posted which located and showcased 1d fans from all over the world.

Then, on July 20th, a British Sign Language video collaboration of the song “History” — best described as an open letter from the boys to their fans was uploaded.

On July 21st, a listening party was hosted, playing all of One Direction’s albums from Up All Night to Made in the A.M. 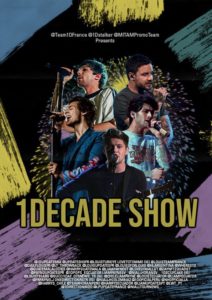 The 22nd is dedicated to reminiscing about how 1D fans got interested in the band and how much things have changed.  It is also the day the 1Decade Show will be going on. There are several shows you can buy tickets for: from solo music for each boy to a group 1d show.

And finally, on the big day, there is an unknown special event planned.

Fan projects may seem casual, or even intense for those who aren’t dedicated fans. But when you spend years following the careers of a band, past their time together and into their solo careers — a certain sense of bonding and familiarity are built. It’s far too easy too pass off these efforts as silly, or not important.

Events like these are even more impactful than normal when the fandom is fractured. But for those, like me, who are diehard One Direction stans — it’s a chance to revel in community, in music, and in those 5 boys who brought us 5 years of so much more than music. Through the good times and the bad — there is something irreplicable about being a boyband fan.

For those who haven’t experience the rush, the dedication, or the pure joy — I feel sorry — because there is no boyband that compares to One Direction. Here’s to 10 years, to the friendships, to the songs, and to whatever the next decade will bring for us.

I have no doubt One Direction (together, or solo)  will continue to make history.

Palak is a big fan of the arts and pop culture, but especially music and all things One Direction. She aspires to be a music journalist and to one day write for a publication like The New York Times, Rolling Stone, or Billboard.

40 of the most hilarious One Direction memes

10 moments that prove One Direction in Australia was always iconic