Christine Pillainayagam on the inclusion of music in her YA debut, Ellie Pillai is Brown

"So much of her songwriting comes from a subconscious place, where writing a song is the only way she knows how to express those emotions."

This post was written by Christine Pillainayagam, author of Ellie Pillai is Brown and is sponsored by Faber.

When I first started learning piano it was because my older sister was taking lessons, and I, the annoying younger sibling desperate to keep up, begged my parents to let me take lessons too. My dad had bought a second hand upright piano, and it arrived with a matching green velvet and mahogany piano bench full of yellowing sheet music; classic tunes from the MGM studio and Lara’s Theme from Dr Zhivago. It felt obscenely glamorous, and I was immediately desperate to play it. My sister, who was a much more natural musician than me, was loved by our shared piano teacher; I unfortunately, was not. Reading music felt as alien to me as speaking Tamil – my parents first language, which I could neither speak, nor understand. I felt disconnected from the music I was forced to learn for exams, could never quite summon the emotion to make it feel anything other than trite. Practicing made no difference to my ineptitude* (*see also – lazy), so I did a hasty 20-minute run through prior to each lesson, in the hopes that it might soften my teacher’s irritation at my lack of talent. In the end, my teacher gave up on me. She ‘retired’, which meant she kept on the students she actually liked– by then, my sister had long since given up and disappeared into her GCSEs.

At some point between being told I wasn’t very good, and finding a new piano teacher, something strange happened. I sat down at the piano one day and played the way I felt. Funny dissident chords and odd couplets of sounds, spiky and staccato, then smooth and rich. I sang to the sounds I made. Words seemed to run at me, jumping in my mouth like I was channelling them through some mystic force. I felt suddenly at home; like I’d discovered an entirely new world, one I’d never known I belonged to. Writing songs became a place I could finally be myself.

In my coming-of-age YA debut Ellie Pillai Is Brown, I knew music had to be key. Like my own teenage world, Ellie is someone who experiences her life through music; through songs that speak for her, better than she can speak for herself. A first-generation immigrant who finds it difficult to communicate with her family, Ellie often tries to be invisible. Whether that’s trying to pretend she doesn’t feel the daily microaggressions of being a brown girl in a majority white community, or the fact she doesn’t quite fit in with the brown community either, Ellie hides from who she is, afraid she’ll be noticed for the wrong reasons.

A singer-songwriter, but only when no-ones looking, Ellie write songs to help her organise reality; to make sense of things when she can’t find the words. The story centres around her decision to find her voice, not just through music, but by opening herself up to those around her. Her decision to be seen. To connect with people. It’s about her learning to accept herself. The songs that Ellie writes, get right to the heart of that. Are able to put on the page, exactly how she’s feeling at any particular moment in the story. A song can take you on a journey both lyrically and melodically, and act as a useful device for not only driving the narrative, but really immersing you in it. Hearing Ellie’s songs, pacing them at particular moments in the story, really helps the reader to understand what she’s going through, and go on that journey with her.

As I wrote the book, the song chapters presented themselves really naturally as part of the storyline, always at moments when Ellie was feeling something powerful. The chapters describe the song she’s writing, how it feels and sounds, and use the lyrics to help build a picture of what she’s going through. Writing these descriptions built a framework for me to go back and write each song to spec. Each song changed multiple times during the writing process, but the overall feel was always driven by Ellie’s emotions. Writing the songs from her point of view gave me an insight into her character that not even the expositional moments where she’s explaining what she thinks and feels, could rival. So much of her songwriting comes from a subconscious place, where writing a song is the only way she knows how to express those emotions.

For me, one of the joys of the story is how Ellie uses music as a way to open up to the world. I love the texture and depth the music element brings not just to the overall experience of the story, but to the process of how I wrote it. Writing the soundtrack alongside the book was definitely an intense experience – it’s essentially two, huge creative projects whose outcomes are so intertwined, and yet need to live and breathe and make sense individually. But it was a joy to inhabit that world and those emotions again; being 15 is, as my almost teenager would say, the *literal best*.

It’s a just a shame so many of us don’t know it at the time. 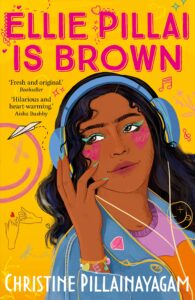 Get your copy of Ellie Pillai is Brown by Christine Pillainayagam here.

For more from Christine Pillainayagam and Ellie, check out the fantastic soundtrack Ellie Pillai is Brown soundtrack.