The singer is wrapping up her Happier Than Ever World Tour in her hometown.

Billie Eilish is bringing her Happier Than Ever World Tour back for two more nights at LA’s Kia Forum. The concerts are part of a special “hometown encore” to celebrate the end of her almost year-long tour, which started in the spring. She’ll take the stage in Inglewood, CA on Dec. 15 and 16. 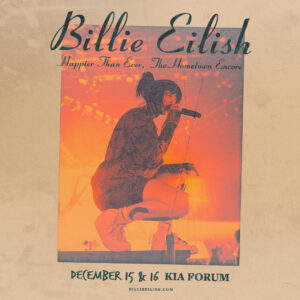 Fans can register for Ticketmaster’s Verified Fan Presale now through Oct. 23 at 11:59pm PST to make sure they are the first to get tickets. A unique code will be sent for the presale, which will take place on Oct. 25 at 10am PST through 10pm PST. Tickets will go on sale for the rest of the public on Oct. 26 at 10am PST on her website.

“LA i am so excited to see you one last time for the year,” said Billie in an Instagram post. “Playing two extra shows for you at the forum!!!”

The two hometown shows are the cherry on top of a special year for Billie. Earlier this year, the singer was nominated for two GRAMMY awards, and wrote three songs for Pixar’s Turning Red with her brother Finneas. She also headlined Coachella and Glastonbury, where she was the youngest person to headline both festivals. Over the summer, Billie also released a two-track EP, Guitar Songs.

Chelsea is a recent journalism graduate from Southern California and an aspiring culture writer. She's a left-handed Virgo, much like her favorite artist, Niall Horan. In her free time, you can catch her watching competition-based reality shows.