Rory Power on writing Adult VS. YA

This post was written by Rory Power, author of In a Garden Burning Gold.

I have two standard answers when asked what my favorite books were as a kid: the Redwall series, by Brian Jacques, and the Wheel of Time series, by Robert Jordan (and later finished by Brandon Sanderson). One is a series intended for grade school children, the other an adult fantasy; I never quite timed it right to catch anything in between.

When I first really encountered YA, I was in my early 20s, fresh off a few years that had cut close to the bone. Every young adult book that I read had that immediacy, that first-ever feeling, that sense that everything – a bad day at school or a cataclysmic life change – resonated on an equal scale. That, I decided, was what I wanted from my writing. Some way to convey how my life had felt: breakneck and too bright.

My family are athletes, as I was growing up; there was lots of talk in my house about fast twitch and slow twitch muscles. Every time I sat down to write, I could feel those fast twitch muscles working, building a voice that functioned in fragments, in horror, in acceleration.

But as it turns out, muscles get tired. I began In a Garden Burning Gold in 2017, in the month after selling my debut novel Wilder Girls. I had been working on Wilder Girls for about a year at that point, and I could feel my brain and body both aching for something different, something requiring a different muscle group. On a whim, I retreated into the kind of fantasy that I’ve loved so much since I was young.

I made a few rules for myself before I started. I was going to use third person, rather than first. I was going to use dual points of view, and one of them would be a man (which, if you’ve read Wilder Girls, you will recognize as the stretch that it was for me). And most importantly – to me, anyway – I was not going to use scene breaks. 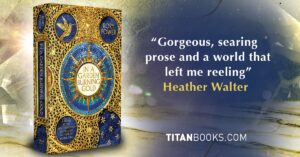 Wilder Girls and my second young adult novel, Burn Our Bodies Down, are littered with scene breaks. They are, to me, the ultimate fast twitch tool. Spending too long in a scene? Break it. Don’t worry about transitions. Want to slip in some imagery that you can’t find room for? Drop it in its own tiny little paragraph and break immediately after. A scene break forces a breath from the reader, forces a pause just long enough for the reader to look over their shoulder, or look anxiously ahead, and it is incredibly useful, but to write a new kind of book, I had to set it aside.

In a Garden Burning Gold moves differently. Not only is it literally longer, but it favors perspective over immediacy, and broadness of scope over a zoomed-in lens. When I read parts of it back, I can feel myself breathing deeply. I can see myself stepping around a fragmented idea or image and instead sinking into the sentences more fully. (I can also see myself wishing, sometimes, that I could just use a scene break, but rules are rules.)

It is a new kind of book for me, a new kind of voice, but still the writing of it felt like walking into a just-discovered room in my house and realizing that I’ve already been there once before, the memory just hazy enough that the view from the window is still a surprise. And in a sense, that’s what I hope readers take from it too. A welcoming, and a little surprise, too. 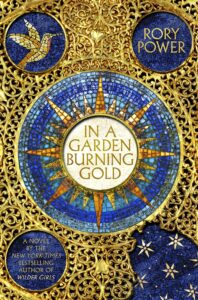 Get your copy of In a Garden Burning Gold by Rory Power here.

Quiz: How well do you know Beasts of Prey by Ayana Gray?