Octobers Most Exciting YA Releases

We met Felicity Montague in The Gentlemen’s Guide to Vice and Virtue but in Mackenzie Lee’s upcoming sequel, it’s time for this aroace, badass, aspiring doctor to take centre stage.

A year after a whirlwind tour of Europe, Felicity has returned to England with her eyes set on medical school. However, in the eyes of the school administrators, even her intellect and passion aren’t enough to look over her gender.

Then a window of opportunity opens for Felicity to work beside Doctor Alexander Platt, an eccentric physician Felicity idolises. The problem is Platt is in Germany and Felicity doesn’t have to funds to make the journey.

Luckily, a mysterious young woman is willing to pay Felicity’s way, so long as she’s allowed to travel accompany her disguised as Felicity’s maid. Against her better judgment, Felicity agrees. But once Felicity learns who exactly she’s smuggling, it’s the begging of another globe-trotting, secret hunting quest.

Seventeen-year-old Anouk isn’t human, though she envies the human world, where people known as Pretties lavish themselves and have the freedom to fall in love. Instead, Anouk is a Beastie, Enchanted from animal to human. She’s forbidden to venture beyond her familiar Parisian prison and destined to a life serving Mada Vittora, the witch who created her. But when her mistress is murdered and Anouk is accused of the crime, she has no choice but to run by the underground magical society hunting her down for a crime she didn’t commit. With the help of her fellow Beasties, Anouk has three days to find the real killer before the spell keeping them human will fade away. They have two options: fail and return to their animal form or succeed and be more powerful than anyone could have imagined.

This month Claire Legrand is delivering the perfectly terrifying, keep you up at night, Halloween read.

The only similarity shared between Marion, Zoey and Val, is that they live on Sawkill Rock, an island where girls have been disappearing for decades. Having moved to Sawkill Rock, to work in Val’s home after the death of her father, Marion’s the newest Sawkill girl. Zoey and Val do not get on, at all, but when they meet Marion, they find themselves thrust together, looking into their islands dark past. No one has dared to fight the evil ravaging Sawkill Rock but this unlikely trio are about to change that.

The wait for the highly anticipated sequel to Laini Taylor’s epic fantasy, Strange the Dreamer, is almost over.

With one a god and the other a ghost, neither Lazlo or Sarai are who they once were. Being held hostage by Minya, as part of her vengeance against the city of Weep, Lazlo and Sarai struggle to come to terms their new selves and boundaries. With new enemies, mysteries, difficult choices and the looming question as to what happened to the thousands of children born in the citadel, the stakes are higher than ever for Lazlo and the Muse of Nightmares.

A Map of Days (October 2nd)

Rigg’s Peculiar Children are back and this time, they’re in America.

Jacob is back with his family in Florida, trying to live a normal life after the wild events of the first three books. However, normality isn’t easy after returning from a time-bending battle, defeating a threat that nearly destroyed all of peculiarkind. When Miss Peregrine and his peculiar friends turn up as his door, jus as his parents are about to commit him to psychiatric care, Jacob is thrust into the world of American peculiardom and starts to unravel the secrets of the dangerous legacy his late grandfather left behind.

After Louise Wolfe’s boyfriend mocks and disrespects Native people in front of her, she’s done with him. Besides, it’s her senior year and she’d much rather focus on her family, friends and the school newspaper. When she’s paired up with new photojournalist Joey Kairouz to cover the backlash the against the school musical directors inclusive approach to casting The Wizard of Oz, things get personal. Cast as the Tin Man, Louise’s little bother is at the centre of the controversy. Sparks fly as Louise and Joey tackle the hostility and prejudices behind the story and it seems like romance could be on the cards, that is, if Louise can learn to trust another boy to respect who she is.

This October, the moment we’ve all been waiting will finally arrived, when Becky Albertalli and Adam Silvera’s utterly adorable collaborative novel, What If It’s Us, hits the stores.

Broadway obsessed Arthur is only in New York for the summer when he meets Ben, who’s on his way to the post office carrying a box of this ex-boyfriends things.

Despite their perfect post office meet-cute, Arthur and Ben’s romance isn’t quite as neat as they’d hoped.

Written alternating perspectives between Ben (Silvera) and Arthur (Albertalli), there’s no doubt What If It’s Us will be equal amounts adorable and heartbreaking.

A mashup retelling of the classics ‘Snow White & the Red Rose’ and ‘Swan Lake’, Blance & Roja is a story of two rivalling sisters. The del Cinse family are bonded with swans, the future of the two sisters tangled within it. One is destined to remain a girl, the other to become a swan. But everything changes when two strangers are pulled into their lives. Everything they thought they knew is turned upside down and their fates might not be set in stone after all, but all that depends on the four facing truths that have the power to destroy them.

Based on the Tony Award nominated musical by the same name, Dear Evan Hansen is a story of high school senior, Evan Hansen. Living with severe social anxiety, Evan’s therapist advices him to write a letter to himself each day. But Evan’s life is turned upside down when one of his letters is found on high school student, Connor Murphy, after he dies by suicide. Suddenly Evan’s pulled into a lie he can’t seem to find a way out of, a lie that he and Connor were secretly best friends. For the first time, Evan’s anxiety seems to ebb. He’s no longer invisible to his crush and Connors family take him in, the presence of their son’s ‘best friend’ helping them heal.

As Evan finds himself pulled deeper in the lie, the more confused he gets. He knows what he’s doing can’t be right but how can something that’s helping people be wrong?

However, all it takes is one person to unravel his secret for the truth to come pouring out and his new life to come crumbling down.

Odd One Out by Nic Stone (October 9th)

Courtney “Coop” Cooper has been dumped, again. He ‘should’ be broken hearted but he’s not because he’s in love with his best friend, Jupiter. But Jupiter Sanchez is a lesbian and falling for the new girl. Rae Evelyn Chin is the new girl, she assumed that would mean she’d end up as the pariah, but Jupiter and Courtney have made her feel like she belongs.

Told in three parts, from three perspectives. Odd One Out is a story of complex relationships, identity and self discovery.

Home and Away by Candice Montgomery (October 16th)

Young, Black, and fabulous, senior, Tasia Quirk, aka Taze, is the only girl on her private high schools football team, has great friends and a supportive, wealthy family.
But Tasia’s life and identity is called into question when she discovers that her birth father isn’t who she thought he was, or even the race she thought he was. After learning she’s spent her life being lied to about her father and the fact that he’s white, Tasia’s life is turned upside down. But with the help of an artsy bisexual boy from the Valley, Tasia vows to unravel the lies that have begun to overtake her life and along the way, learns to stop fighting who she is and see the world in a new light.

This October, author of the best selling Shatter Me series, Tahereh Mafi, is releasing her first contemporary novel, sen in 2002, a year after the evens of 9/11 shook the world.

Sixteen-year-old muslim Shirin, is unfortunately used to be being stereotyped but she’s tired of it. She’s done with the stares, degrading comments and physical violence aimed at her because of her race, religion and clothes.
The only times she’s found can quieten her frustrations, are during the afternoons spent break-dancing with her brother.
Then Shirin meets Ocean James, the first person in as long as she can remember, who seems to genuinely want to get to know her. Shirin wants to let him in but her guards been up for so long, can she learn how to let it down?

For Stella, the depression consuming her life is less than ideal and utterly draining. It’s limited her goals to surviving for junior year, staying out of her parents’ constant fights and holding onto her friendships.
That is until Kevin, a quiet senior, comes into the picture. He understand Stella like no one else. For the first time in forever, she feels listen to, hopeful and no longer quite so alone.
But in holding onto that feeling, everything else begins to slide. As her grades slip and her friendships fade, she begins to see that Kevin’s scars go just as deep as hers. Their little arguments are shattering and major fights catastrophic. Trying to hold it all together is exhausting Stella to breaking point. Stella soon faces the hard task of figuring out what she needs to survive, what’s worth saving and what she needs to let go. 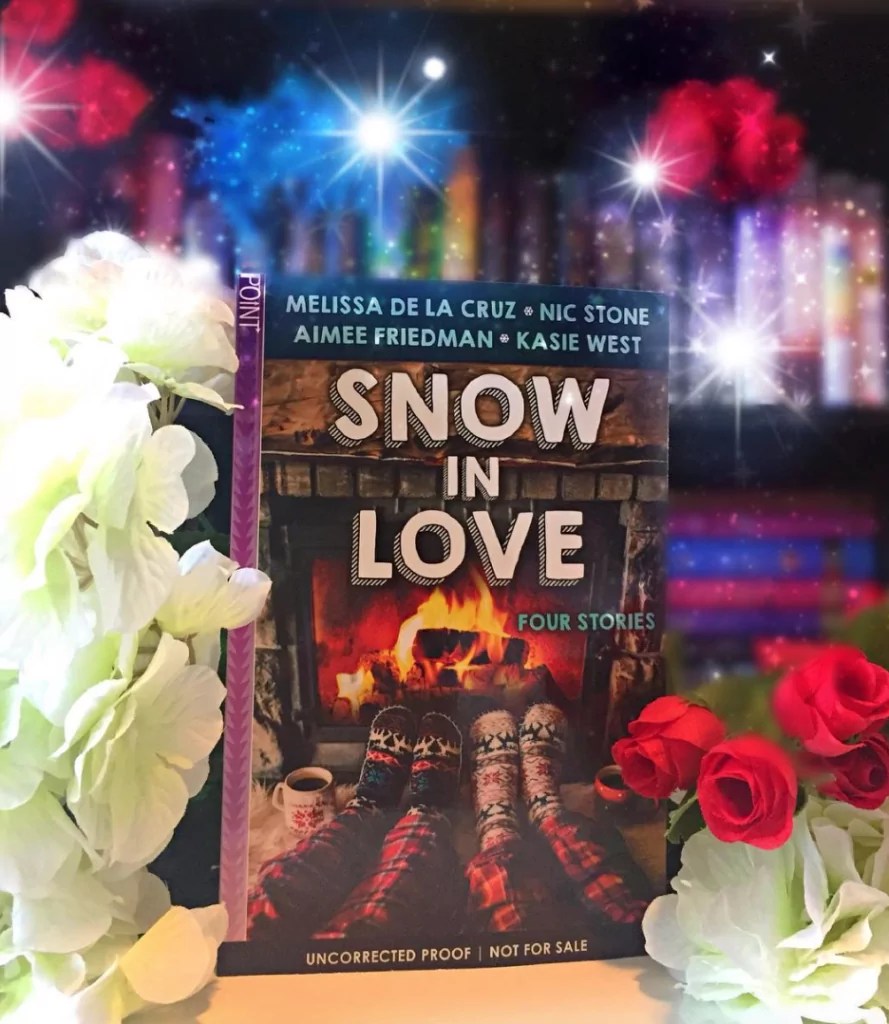 The only thing better than snuggling up with an adorable holiday story, is cuddling up with four of them.

This utterly adorable second chance romance follows film fanatic and aspiring screenwriter Nathan Bird. When it comes to love, Nathan’s MO has always been to play it safe when, desperate to avoid the broken heart his Mum suffered after his Dad died. When his childhood best friend Oliver James Hernandez comes back into his life, Nate finally has the chance to share his true feelings after a painful mixup when they were kids. But only if he can find the courage to open his heart and pursue his own happily ever after.

Don’t know which book to read first? Let this quiz decide for you!

new ya releasesoctober ya releases 2018ya books
0
Share FacebookTwitterReddItWhatsAppPinterestEmail

Closed: Win 1 of 5 copies of The Greatest Love Story Ever Told: An Oral History