Mary H.K. Choi on why she believes social media is a scam and her new YA novel

Following Pablo, a college drop out working at his local twenty-four-hour deli, as he balances student loans, questions about his future and his budding relationship with global superstar, Leanna Smart, Permanent Record, the new YA novel by Mary H.K. Choi, brilliantly explores the reality of navigating life in the digital age and the pressures that come with it.

We were lucky enough to have the chance to chat with Mary about her newest novel, navigating your twenties and why she believes social media is “such an insidious, elegant scam.”

What was your biggest inspiration behind writing Permanent Record?

New York. There’s something so existentially uncomfortable about living in a city teeming with successful, ambitious peoplethat’s so wholly indifferent to your specialness. It’s the crazy-makingest place. You feel simultaneously late for everything and not invited to the really good things. I was interested in exploring the terror of navigating your early 20s here since it had been such a memorable time for me. I’ve also been fascinated by the celebrity industrial complex and how it’s changed in the age of social media and this guise of transparency and relatability that’s so seductive and seemingly attainable but also a total lie.

Aside from novel writing, you’ve also worked in fields such as journalism, podcasting and comic books. Has having such a vast variety of experience in media impacted your writing at all? If so, in what way?

Absolutely. If it weren’t for my fifteen years reporting on culture I don’t know that I’d be as invested in what was going with tech, youth culture and music. Memes are so important as a bellwether for what’s happening in the world. How interests and concerns are shifting. Podcasting—and people might skewer me for this—is more of an inquiry into what’s going on with my friends and colleagues. It’s that journalist’s trick of getting to be justifiably nosy and it’s been incredible to be in charge of a media product that never has to be monetizable. As for comic books, writing scripts where you’re in charge with the dialogue, plot but also the blocking (where everyone’s standing) and movements has helped me consider proxemics and how crap I am at them. Whenever someone like me goes from journalism to fiction, you’ll notice that we’re all a bit erratic with the viewfinder or what to do with everyone’s hands. I think comics will help me get better. I would love to find the time.

Possibly? Honestly I’m not sure. Permanent Record is book number two. Think about that. How much do you actually learn doing something once before? Especially when that thing is the biggest block of copy on a single subject that you’ve ever attempted to chain together in your life? And when all the words are about things that you’ve wholesale made up? I think I learned that getting to the end of a draft is still a miracle. And that imposter syndrome will conjure spectacularly inventive ways of trying to foil me getting to that ending. I think the one helpful thing I can share is that you have to be really compassionate to your first draft and really forgiving of how hideous and cringe it is.

What was it like making the jump from writing comics to writing novels and what were the biggest differences between writing the two?

Going from third person with the POV flipping between Penny and Sam in Emergency Contact was dicey but something I wanted to try. Ultimately the story needed it. Getting to stay sitting inside Pablo’s head the whole time as first-person in Permanent Record was wonderful because it was a voice I was instantly comfortable with and it was easier to grapple with his anxiety and depression. It was all right there. But the interiority of that was tricky at times because you can’t have massive blocks of feelings without losing the reader. It starts getting a bit one-note and self-obsessed. That’s been a criticism of the book which feels sort of fair but is also a reason I don’t read reviews anymore.

Pablo, one of the main characters in Permanent Record, is a college dropout trying to figure out what he wants out of life. This was such a refreshing narrative and something rarely seen in YA. Is discussing alternate routes, besides higher education, something you believe is important to explore in YA and if so, why?

Totally. I don’t know the particular foibles of what it’s like to go to uni in the U.K. All I know is that when I was a kid all my British friends were able to overdraw on their back accounts and somehow that was okay. You wouldn’t get fined to oblivion because the banks sort of assumed that a young person would be crap at money so there was more forgiveness built-in. That blew my mind. College is so expensive in the U.S. I went and was in the wildly privileged position of having my parents pay for in-state tuition but I personally don’t think it’s the only way to go. I don’t know that mortgaging your entire future in order to pay for higher education in order to get a job to whittle away at that wildly amortizing chunk of terror-money is the only option. It’s another big, broad broken thing like so many for-profit institutions in the U.S. which bums me out. Changing majors probably feels like setting your car on fire. I get sad thinking about what might happen if intellectual inquiry and creative curiosity weren’t so prohibitively expensive.

College-aged protagonists is something we’re slowly seeing more of in YA and while a lot of people are incredibly happy about this, it’s still considered somewhat controversial. Why do you believe it’s important for YA to accommodate young adults and teens alike?

I didn’t have any idea of what I was doing until I was solidly thirty. Eighteen, nineteen, twenty, twenty-one—there’s still so much flailing. Except that there’s this narrative, this story that you’re told and the story you’re telling yourself that you should know more. Stakes are so high. There’s this expectation foisted on this generation that they’ll save the planet, know more than the generation before them, give a TED Talk by the time they’re twelve and disrupt every industry and exit with a bajillion dollars by the time they’re 18. College-aged adults have only ever known the 24-hour-news cycle. They’d sooner eat their fists than take a phone call or ask someone in person for guidance or help. These are agile thinkers who are brilliant at so much yet startlingly inept at other things and often so fraught with anxiety and insecurity. It’s been drilled into them that the job market is in the toilet, that the planet is on fire and sinking and that people in power believe science is a lie. It’s a wild time to be newly on your own. Plus, it’s the great trick of convenience culture and social media that we always feel as though we have an audience. Think about how exponentially scary that makes the prospect of mistakes. I don’t want to get into this otherizing narrative because I think teens and early-twenty-somethings are largely the same regardless of the technology surrounding them but there’s so much to unpack and talk about in being young right now and I absolutely think you qualify as a Young Adult for a while longer than high school.

Permanent Record brilliantly explores social media, the pressure it can put upon people and the effects it has on the mental health and lives of those who use it. Being a social media user yourself, what was it like examining and delving into this narrative?

All I know is that I get in trouble when I start living my life or creating work when I’m sitting in my own audience. If I’m fixated on optics, how something will appear, be received or if I spend any time practising what I’ll say if something wonderful or awful happens as a result of my doing anything I have to get off social media. This is going to sound very coffee-mug bromide but you have to be present in order to make good work and love the people around you properly. Viewing yourself from outside of yourself—which is usually what happens when I’m thinking of something clever to tweet or “curating” an attractive slice of experience for Instagram—is usually accompanied by zooming into the future or delving into the past. In my experience, this makes me either depressed or anxious. Social media’s such an insidious, elegant scam. It’s amazing to me how hard we work for a dopamine hit we could get elsewhere to make a handful of men more powerful and rich. The addiction algorithm is so impressive.

What’s next for you and is a book number three something we can look forward to? If so, can you give us a hint as to what we can expect?

It’s about sisters. They’re Korean. They don’t particularly like each other and it’s also set in New York. 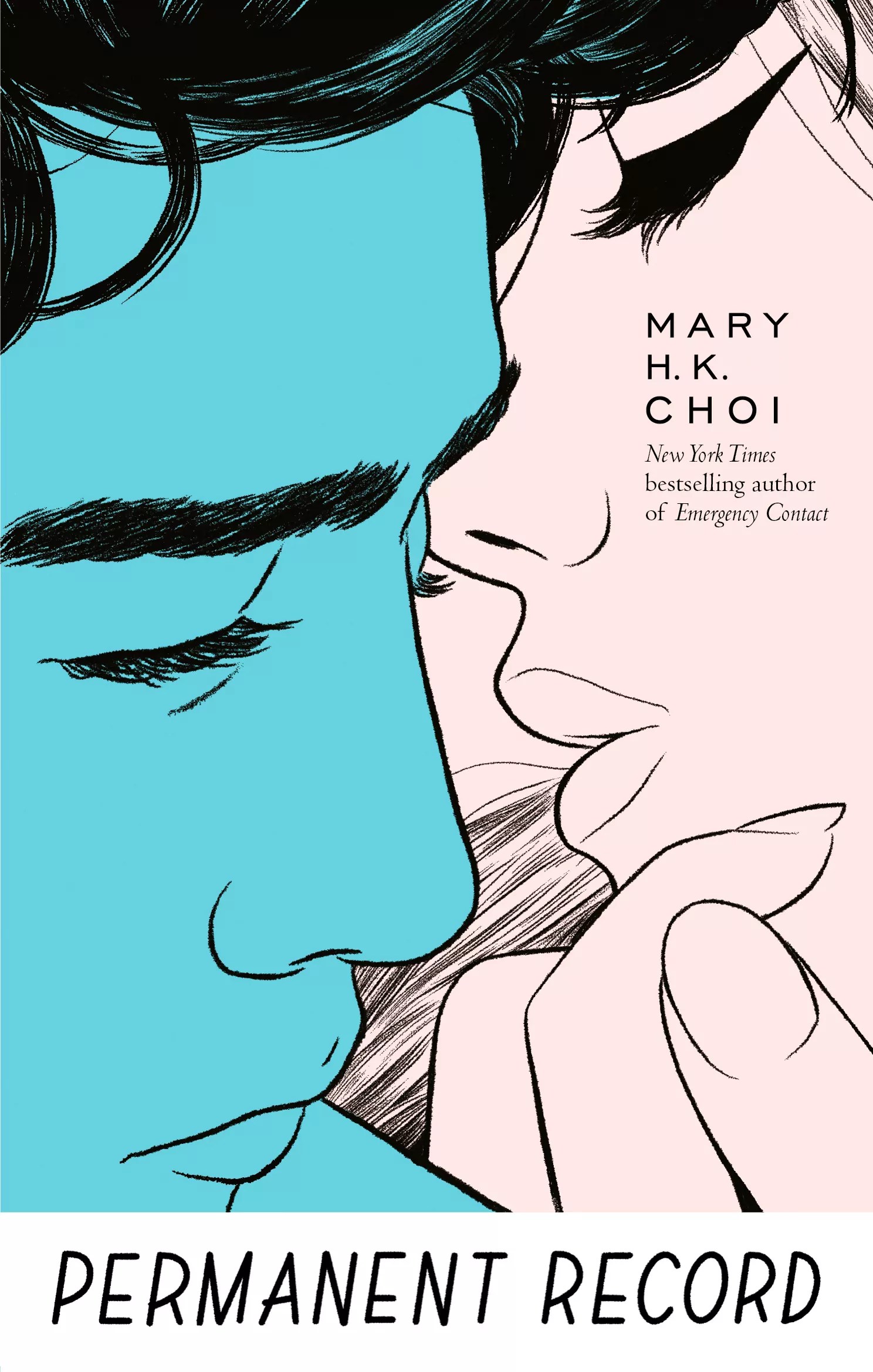 If Permanent Record sounds like something you need to read asap (because, of course, it does) you’re in luck because we have the first two chapters for you to read right now.


Want to read on? Order your copy of Permanent Record by Mary H.K. Choi today in the UK and US.