Emily Victoria on asexual and aroace representation in YA

"Young adult books often feature romantic relationships quite prominently, and I was scared that no one would be interested in a book with a friendship at its center."

This guest post was written by Emily Victoria, author of This Golden Flame.

To celebrate the release of her page-turning debut YA sci-fi fantasy, This Golden Flame, Emily Victoria opens up about her experiences as an #OwnVoices aroace author and the importances of aroace representation in YA.

Growing up, I didn’t have much chance to read about people who shared my identity. Honestly, I can’t think of a single instance where it was explicitly stated that a character was aro or ace in a book that I read. And to a certain degree, I didn’t notice, at least not in a way that I could articulate. Back then, I didn’t have the language to describe my own identity. The only thing that seemed off to me when I read most books was that a lot of the characters, particularly as I became a teen and began reading teen books, were really interested in dating and involved in crushes, and I just… wasn’t.

I’m able to look back now and grieve a little bit, that I didn’t have those books at a time when it would have meant so much to me. I’ve always thought that books are far more than just the words we read on the page. They are portals for self-discovery. The act of reading can be an intensely private affair, which gives space for learning and growth without others watching or judging. I wish that I was able to have that experience and that space when I was younger.

However, I’m also in the very special position of knowing that I get to write these stories now, both for myself and hopefully for some teen somewhere who is just like me. It’s true that there still aren’t that many books out there that include ace characters. This becomes especially true when you look for ace leads where as a reader you can get that point-of-view experience that is so important for deeply connecting with characters. But ace books are starting to come out. There’s Tarnished Are the Stars by Rosiee Thor, Belle Révolte by Linsey Miller, and Elatsoe by Darcie Little Badger, just to name a few. And though it still boggles my mind, soon my book will be among them.

I will freely admit that This Golden Flame was the very first time I had written an aroace protagonist, someone who was just like me and who I could give some of the deepest parts of myself to. Before that, I hadn’t written my identity because I didn’t think there was room in the industry for my identity. True, there are aro and ace books out there now, but most of them have been published fairly recently, and back when I was first starting writing I didn’t really have an author I could point to who had blazed the trail before me. Young adult books often feature romantic relationships quite prominently, and I was scared that no one would be interested in a book with a friendship at its center. I was scared that no one would care.

But then I was asked to pitch a new idea to my agent in 2017, after my last book had failed to get a publisher. And looking at the state of the world around me, I realized that I wanted to write an ace lead no matter what. Even if it failed. Even if no one did care. Because the spaces where these books needed to be shelved would only be filled once we had written them.

So I wrote This Golden Flame and I wrote Karis, my stubborn, impulsive aroace girl. She isn’t representative of all aro folks, or ace folks, or even aroace folks, because that is a full, beautiful spectrum that includes a wide range of full, beautiful people. But she is representative of me, and remains the most authentic character that I have ever written. I loved Karis from the moment I started writing her because I got to see so much of myself in her. She didn’t need or want romance or a passionate relationship. And the world didn’t expect that of her either. It was such a freeing experience to write Karis.

However, even though this post is specifically about my experiences as an ownvoices aroace author, I can’t talk about Karis without talking about Alix too, my cinnamon roll automaton boy. Just like so many young adult novels have a relationship at the center of them, I knew that This Golden Flame was always going to be about friendship: Alix and Karis’s friendship. Starting out in the book, both of these characters are lost. Karis has lost her brother thanks to the Scriptorium. Alix has lost pretty much everything. But they find each other and they have to learn to work together, and it is only then that they are able to find themselves.

I loved being able to write that relationship, and to frame it in a way that was seen in no way as lesser than a romantic relationship would be. Because friendships can be just as strong as love at first sight, and they have just as many ups and downs that have to be navigated to emerge stronger together on the other side. And just like friendships are so central to my life story, and are central in the lives of so many teens, I knew that I wanted them to be central to Karis’s as well.

As it turns out, people did care. So, so much. Every day I’m blown away by the team I get to work with, and the readers who are finding my book. More than anything I hope that This Golden Flame finds that teen who is just like I was, looking for a book that truly represents who they are. And more than anything, I hope that this paves the way for other books just like it. 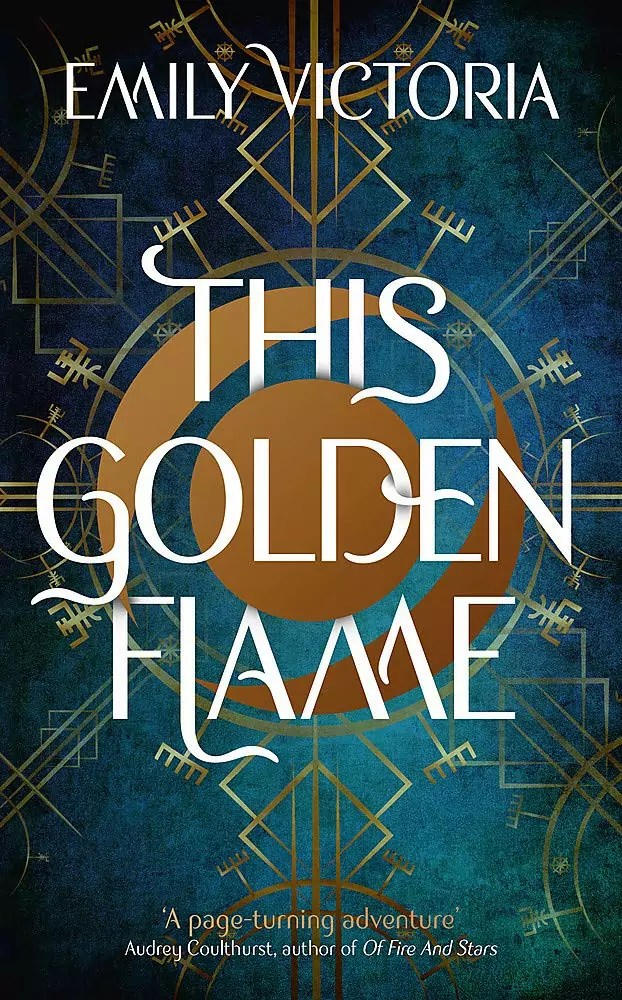 Get your copy of This Golden Flame by Emily Victoria here.