Courtney Summers on devastating her readers and her new YA thriller, The Project

"My books aren’t easy to read, and given their topics, they shouldn’t be."

Courtney Summers is no stranger to devastating her readers. Exploring everything from rape culture to murder to mental health, her books have pushed our emotions in every direction and had our eyes glued to the pages of her stories. And now, in her newest YA thriller, The Project, Courtney explores the world of cults and the people who fall victim to them through a fresh and harrowing lens.

We were fortunate enough to chat to Courtney about her sensational new novel, why she chooses to write about ‘tough’ topics and confronting her own vulnerabilities through her writing.

Hi Courtney, it’s such an honour to have you on the site today to celebrate the release of your phenomenal new YA thriller, The Project. Can you tell us a little about your inspirations behind the story?

Thank you so much for having me! I appreciate the opportunity. Most people don’t believe they’d join cults and I wanted to write a book that challenged that perception, asked readers to approach the subject with a little more empathy, and dared them to see themselves in its pages.

The Project explores a lot of incredibly tough topics, with scenes that were inevitably pretty hard to read. What was your experience of writing The Project like? I can imagine it must have been pretty emotionally draining/challenging at times?

The Project was an intense book to write. It took some time figuring out what it wanted to be and I felt a lot of of pressure to make sure the narrative wasn’t exploitative or sensationalistic. My primary concern was honoring the stories of survivors and victims and anything falling short of that would have felt like a failure. I couldn’t prioritize my comfort over the demands the book was making of me. I had to be willing to confront my own vulnerabilities, and make sure I was always engaging from a place of empathy when exploring the vulnerability of others, so I could write something that felt very human and true.

You don’t shy away from admitting you love to write books that will devastate your readers, which we all love and hate you for (in the best way). What is it about writing these kinds of stories you find so enticing?

My books aren’t easy to read, and given their topics, they shouldn’t be. I tend to write about topics that outrage me—such as violence against women and girls—because I want to push against how desensitized we’ve become to it. I want to push readers from a state of complacency by challenging them with these stories.

From zombies to journeys of revenge, you’re no stranger to writing chilling and utterly page-turning thrillers. Do you have any advice for aspiring authors wanting to do the same?

There’s this scene in Halloween where Michael Myers is standing between some sheets hanging on a clothesline and it’s horrifying in its simplicity. This wildly out-of-place monster amid something so familiar and mundane. I think a great way of creating tension and discomfort is looking for those tiny ways to make the familiar feel almost hostile, unsafe.

Anybody not following you on Twitter is missing out big time. Your positive attitude and self-love surrounding your work is such a breath of fresh air. Just reading your tweets makes me want to not only re-read every book you’ve written but every tweet you’ve tweeted whilst pumping my fist in the air. Do you have any advice for aspiring writers (or anyone for that matter) struggling with lack of confidence about their work?

Thank you so much! That’s very kind of you to say. I always encourage aspiring writers to consider the hubris that demands they write to begin with—because it has to come from somewhere. You must have some level of faith and confidence in your abilities if you want the world to read what you’ve written, right? I think it’s easy to forget how very foundational and ingrained that desire is and how it speaks to talent we must believe we possess! When all else feels uncertain, tap into that.

Finally, for all the Courtney Summers fans out there, I have to ask, are you currently working on anything new and if so, can you give us any hints as to what we can look forward to reading from you next?

I am—but I can say nothing of it. I can only make the promise that it will hurt. 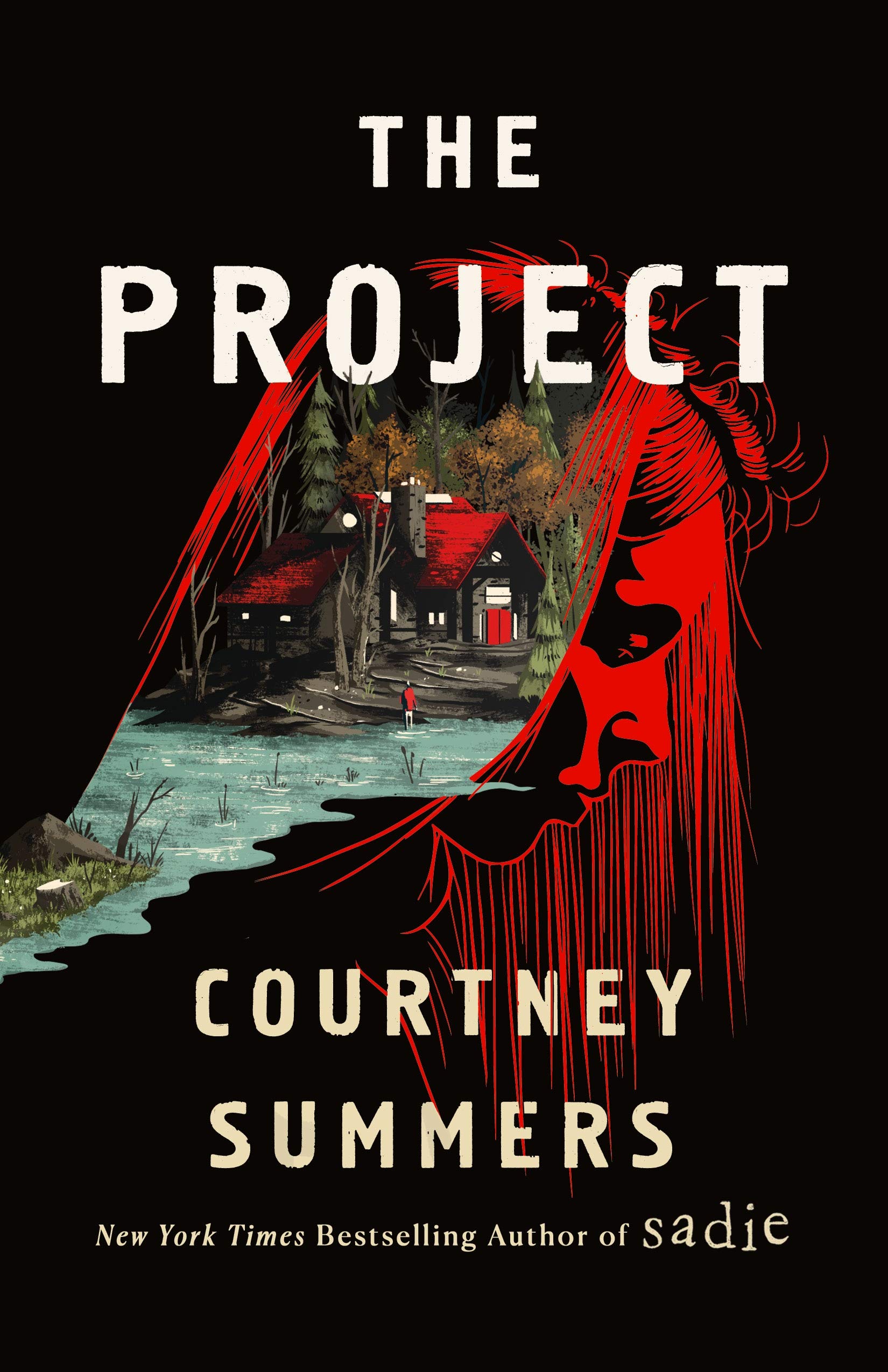 Continue reading for an extract from Chapter One of Courtney Summers’ new YA thriller, The Project.

I woke to the promise of a storm. It wasn’t in the air but I felt it in my bones. Sunlight edged the corners of my covered window and if I’d told anyone to pack an umbrella, they would have told me I was crazy because when I threw the curtains wide, there wasn’t a cloud in the sky. But my body never lies and by the time I get to the train station, it’s raining.

I slowly raise my eyes from my lap, unclenching my fingers from fists. My cab driver is leaned forward, staring through the windshield at the dark gray shroud overhead. I dig my wallet out of my pocket and fumble for some bills, passing them over the seat before getting out. The first few drops of rain land cold against my skin and the downpour starts in earnest the moment I’m safely through the automatic doors. I turn to watch the people who didn’t get so lucky as they scramble for cover.

“Fuck’s sake,” a woman mutters as she fumbles in, drenched, dragging two miserable toddlers alongside her, a boy and girl. The boy starts to cry.

I face the station and check the noticeboard against the wall. I’m ten minutes early; no delays. A relief, though not in terms of arrival. When I close my eyes, I see the mess of blankets atop the bed I forced my aching body from, awaiting me.

I turn and stumble into a human wall, a man. Or a boy. I’m not so sure. He might be a little older than me, maybe a little younger. Time has yet to stake a claim on him in any definable way. His eyes widen just slightly at the sight of my face.

The apples of his cheeks are a fevered red against his pale white skin, and there are dark circles under his brown eyes, like he hasn’t known sleep in any recent sense of the word. He has a greasy mop of curly black hair and he’s very thin. I’ve never seen him before and I like the way he’s looking at me less and less, so I sidestep him, leaving him to his mistake.

I join the crowd gathering at my platform. I hate the preboarding jostle, of finding myself amid an impatient collective that has lost all sense of assigned seating. Soon, I’m surrounded by twitchy passengers, their shoulders touching my shoulders, elbows touching my elbows. I press my lips together and close my eyes, rubbing my hands together. I love wasting a day off at the doctor’s office for my annual diagnosis of still kicking, whatever that means.

“Whoever will lose his life for my sake will find it.”

I still at the strangeness of the words, at the newly unwelcome familiarity of the voice they belong to. I open my eyes and glance beside me to see if anyone else heard, but if they have, they do what I don’t, keeping their faces pointed down the tracks, awaiting the train. I decide to do the same, ignoring the heavy presence behind me until there’s a push against my back, and those words again—but closer.

“Whoever will lose his life for my sake will—”

I face him. “Look, would you back the fuck off—”

It stuns me into silence. His eyes broker no argument, more certain of me than I’ve ever been of myself. Before I can ask him how he knows my name, where he ever could have heard it, he opens his mouth once more. The rumble of the oncoming train drowns him out, but I read his lips: Find it. He grasps my arm and moves me aside to push through the disgruntled travelers standing between him and the edge of the platform. The edge of the platform and the …

No one sees him until he’s made a clean jump onto the tracks and then everyone sees him and they all watch, waiting for what he’ll do next.

There’s still time. Maybe he just had to get this close to the other side to realize it was there all along because sometimes that’s the moment life brings you to. But more often than not, it feels like it’s this one: you lie down on the tracks and the train is coming.

The boy, trembling, lifts his head to be sure.

I turn away, my heart pounding, and force myself back through all the bodies until I’m free of the immediate crowd, only to be trapped by another greater swell of onlookers.

One of them screams, “Don’t do it!” But it’s already done.

CREDIT: THE PROJECT by Courtney Summers. Copyright © 2021 by the author and reprinted by permission of Wednesday Books.

Need more? Get your copy of The Project by Courtney Summers here.