Aneesa Marufu on the inspiration behind her debut YA novel, The Balloon Thief

"I wondered if discarding one’s problems could be as simple as leaving them on the ground and jumping in a hot air balloon."

This post was written by Aneesa Marufu, author of The Balloon Thief. Sponsored by Chicken House Books.

When I first sat down to write The Balloon Thief back in 2018, my intention was simply to quell my obsession for things that fly, but as I delved into the fantasy of flight, the weightlessness of being airborne and the sense of disconnection with the world below, I wondered if discarding one’s problems could be as simple as leaving them on the ground and jumping in a hot air balloon. As a teenager, my own escapist desires would have me craving the opportunity to drop everything and quite literally float away in the same way that my characters Khadija and Jacob flee the problems in their own lives – be it Jacob’s battle with racism or Khadija’s struggle with misogyny and gender inequality. However, both characters soon come to realise that, like everything that ascends, they must come down eventually where their problems still remain.

The Balloon Thief started out like any other fantasy novel, at a time where I craved the escapism from the pressures of everyday life by delving into a world of magic, jinn and hot air balloons. It was only as the story unfolded and my characters began to develop minds of their own, I knew then that there was a more important story that I wished to tell. This book is a battle of two things: identity and loneliness. It is as much a journey to find one’s place in the world as it is a longing for acceptance and companionship – both increasingly relevant in today’s world.

This is a book that may make a lot of people feel uncomfortable with its discussion of terrorism, extremism and racism, drawn mainly from my own experiences with Islamophobia. Growing up as a British Pakistani and a Muslim, I was constantly questioning my own identity of being British and yet never feeling quite British enough. I wanted to depict racism from both angles in The Balloon Thief, and show how much of a person’s prejudice is influenced by external factors such as society, media and a person’s upbringing, and how it can be possible to change these preconceptions through integration and education. In the book, main characters Khadija and Jacob are forced to put their differences aside to tackle a greater threat, and in doing so learn the importance of friendship and forgiveness, with the key message of the book being that differences should be celebrated instead of feared, and that fear tends to stem from a lack of understanding.

Exploring everyday themes within the fantasy genre adds that sense of realism to a story that can make it much more relatable, even if readers cannot relate to a story about two friends saving the world in a hot air balloon, they can relate to the feelings of prejudice and unbelonging that the two characters are facing. I’ve always found that the books that tend to stay with us long after we’ve read them are the ones we feel resonate and represent us, and fantasy is no exception. 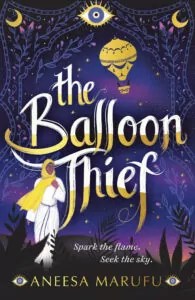 Get your copy of The Balloon Thief by Aneesa Marufu here.