The Fangirl Conundrum: Why are female fans not taken seriously?

Your sex or age doesn’t dictate how you can be changed by music or the impact an artist or band can have on your life.

If you Google the words “Why are fangirls…” these are the suggestions that populate: 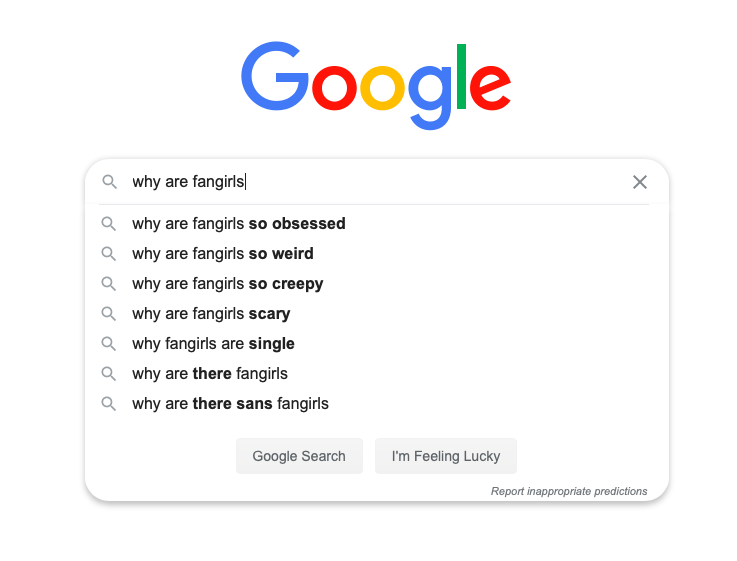 The results are telling, and unfortunately, the fangirl conundrum is one that’s been around for ages — a stigma that is strong and unyielding. Yet what it really is, is an outdated description to demean fans and categorize an entire group of people as silly teenage girls who know next to nothing about “real” music.

There are a lot of issues with this concept. Aside from it being sexist, it’s also ageist; not all boyband fans are young girls. There’s no age limit on enjoying good music, especially not when every day people are discovering bands old and new.

Your sex or age doesn’t dictate how you can be changed by music or the impact an artist or band can have on your life. In fact, discrediting any fan on the basis of sex is not only unfair, but ultimately creates more angry, passionate fans.

Fangirls go hand in hand with boybands, and automatically it is assumed that their passion is solely based on admiration or attraction to the musicians (as if this factor only applies to girls/woman, not men who scrutinize female artists).

Even then, some of the greatest bands and subsequent solo acts of our world have originated from boybands. From the Beatles down to One Direction — only a purposefully oblivious person could refute the claim that a boyband is essentially the backbone of the pop music industry.

This phenomenon of discrediting fans isn’t exclusive to music. It’s no secret that people have idols in every field. The bottom line is, behind the music there’s the artist — someone for fans to look up to. When did this become a negative thing?

And while these fans are ardent, dedicated, and, most of all, unafraid to make their opinions heard, their intensity translates to true music appreciation. In any other field, someone with this much insight and knowledge on a topic is considered an expert, so why not in music? Why has “the fangirl” as an idea become an insult?

Building your life, or more so, your hobbies and happiness around musicians can be risky business. And it’s naive to ignore that some fans do take it too far — but the experience of being a “fangirl” (or rather an “expert”) is much more than that. It’s the adrenaline rush of a new album drop, of being at a concert you waited ages for, the steadiness of being invested in something so deeply. These things, amongst a long list, are what being a fangirl is all about.

Why is it different from being a die-hard fan of a sports team? Or of a classic rock band? Can’t being a fan of something be a multi-faceted experience? And why is it only cool to be a mega-fan of something that isn’t pop related? Perhaps the term fangirl itself needs to be reframed. Or maybe, it’s time to stop pretending that boybands don’t work hard or make good music.

I’m not afraid to make the claim that fangirls are the truest fans. They’re the ones who stream, start fan projects, create art inspired by the music they listen to, and build communities that branch across the world.

So yes, the staff at United by Pop and I are all fangirls — and we’re proud of it. Our editors Jackie and Verity started this publication for this exact reason: to build a platform where fangirls felt like they could be heard, not silenced or ridiculed.

At the end of the day, fangirls, fanboys, and fan-non-binary-pals are fans. Period. They’re more devoted, more credible, and more knowledgable than any other type of fan. But the beauty of this is that they don’t need to explain themselves or their passion to anyone to make it any more true. They take themselves seriously.

It’s about time everyone else does too.

The fangirl conundrum isn’t that hard to solve. It’s a matter of respect and understanding. It’s breaking down a stereotype that is far too old. Everyone is a fan of something, whether casual or dedicated.

Fangirls are fans — and fans are what make the music industry work.

Palak is a big fan of the arts and pop culture, but especially music and all things One Direction. She aspires to be a music journalist and to one day write for a publication like The New York Times, Rolling Stone, or Billboard.