Get your boot-scootin’ shoes on baby, because Steps are back! After releasing their comeback single ‘What The Future Holds’ earlier this month, fans have been treated to even more surprises, with news of an album and UK tour being announced shortly after.

Steps, consisting of Claire Richards, Ian “H” Watkins, Lee Latchford-Evans, Faye Tozer and Lisa Scott-Lee, remain to be one of the most iconic groups formed in the 90’s. Zooming live from the O2 on Wednesday 16th September, Steps invited fans to virtually celebrate the release of ‘What The Future Holds’ and talk all things past, present and future Steps.

I was lucky enough to join the Zoom party and have all the exciting news you need to know!

1. Sia wrote their latest single ‘What The Future Holds’

After hearing Sia’s demo, Steps knew ‘What The Future Holds’ was something special.
“Obviously she’s got the most incredible voice,” Faye said. “When we heard the track, we knew it was a banger.”

H revealed that ‘What The Future Holds’ solidified Step’s decision to release new music and tour, with the song shaping the sound of the album, the look and the overall direction of this new era.

When describing their upcoming album, Claire revealed that the lead single, ‘What The Future Holds’ perfectly encapsulates the track list of songs set for release.

“[The album is] very much a mix of ‘What The Future Holds’… and quite a few that are a real nod to what we were in the 90’s, real classics, which we didn’t have on the last album, everything was about massive bangers.”

We have no doubt there will be bangers on the next album, but we can’t wait to hear the more “sophisticated” 90’s sound they have teased. Fans also have a longer track list to look forward to, which is music to our ears! 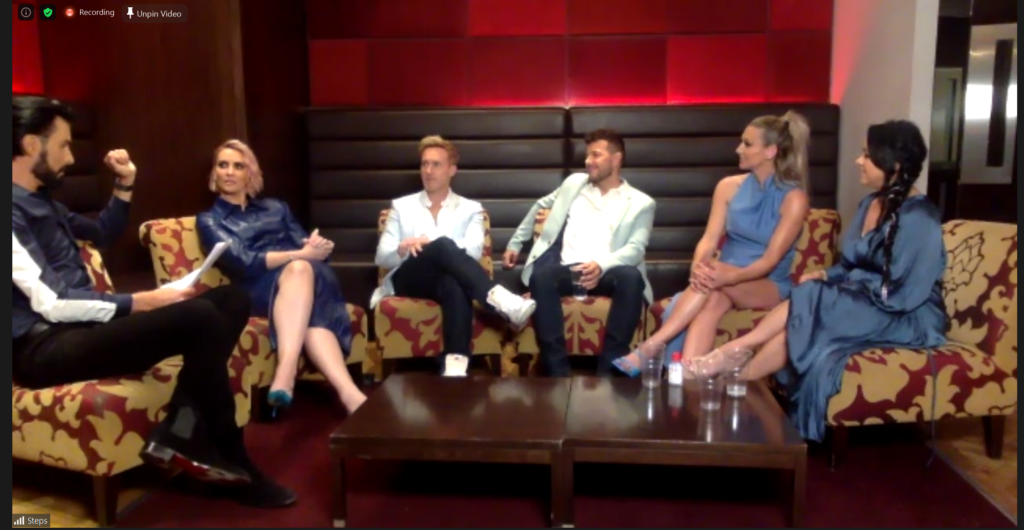 3. Their 2021 tour will be bigger and better than ever before

Not only did Steps confirm the set design for their upcoming 2021 UK tour has been decided, they also revealed something never been done before will be featured in their staging.

“Each time we do tour we try and make the set more visual and more fabulous, so we do look back at all our previous designs,” Lisa said. “This time we’ve got something that is unique, and we’ve thought about the fans as well, so we think that they will appreciate the new set.”

The band also reminisced on past tour moments, noting the trouble that trap doors and costume malfunctions can cause on stage, with Claire being the most likely to fall over during a show. Let’s hope there’s no such tragedy during their 2021 tour!

With over 20 years’ worth of incredible music, creating a setlist can be a difficult task.

“One of the nicest problems we’ve got is cause we’ve got such a big back catalogue now, we sit down and work out which hits and which songs we’re going to put in the show and which ones we can’t fit in,” Lisa said.

However, Steps are always thinking of their loyal, passionate fans and love when they are involved in the development of setlists. The group encourages fans to stream their favourite songs on Spotify to ensure their beloved deep cuts have a chance at being performed live, alongside the huge hits.

I reckon 100% the best way is to stream. The numbers do not lie xxxx

5. Collaborations may be what the future holds for Steps

When considering their dream collaborations, Steps mentioned that Sia is an obvious choice, possibly joining them for a verse on ‘What The Future Holds’. The group would also love to collaborate with Lady Gaga, Dua Lipa and Sigala, which no doubt, would provide the world with some incredible pop music.

Fans were also curious about possible collaborations with Sophie Ellis Baxter, who will be supporting the group on their 2021 tour, and Kylie Minogue, their label mate – after Steps famously covered her hit song, ‘Better The Devil You Know’.

It’s safe to say, we want it all and can’t wait to see what the future holds for Steps!

You can stream ‘What The Future Holds’ and pre-order Steps’ upcoming album of the same name, to be released November 27th, 2020.

Tickets to their 2021 UK tour are on sale at 10am, Friday 18th September, through Ticketmaster.