The Rio Olympics have drawn to a close, and what a games it’s been. With the US topping the table with 121 medals and the UK in second place with 67 medals, we have witnessed some truly amazing achievements. From Bolt winning 3 gold medals, Mo Farah becoming Britain’s most successful track and field athlete,  and Laura Trott becoming the most successful British female athlete to date, these games have undoubtedly been one of the best.

Despite these fantastic and historic moments, this is 2016 after all and nobody can escape being Meme-ified. Not only have the athletes become forever capsulated in meme form, the people working at the games have joined them too! So without further ado, we’ve compiled a brief collection of LOLworthy examples.

Probably one of the most famous memes of the games, this photograph was taken at the perfect moment. Only the fastest man on the planet can manage to flash a cheeky grin mid race!

Even his opponent got meme’d

The question we all wanted answering

This unfortunate positioning of names

These guys on the German hockey team bring out the inner 12-year-old sense of humour but guess what, we don’t care especially when your names are…

Obviously, it would be hugely childish & wrong to chuckle at Linus & Florian, the backbone of Germany’s hockey team. pic.twitter.com/jn1lJESmkE

Despite coming first, the preliminary table didn’t think J Abel was all that 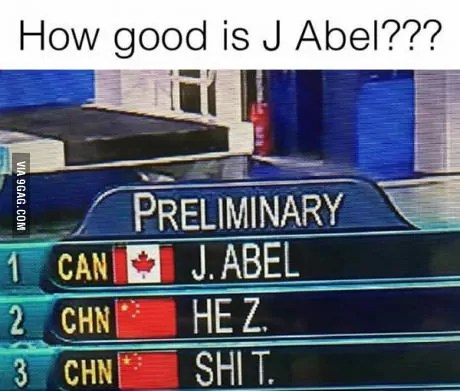 when you pass your friend the aux and they don't come through #PhelpsFace pic.twitter.com/FjWs2nTUPi

Who’d have thought these top athletes would need a lifeguard observing them while they swam? We don’t think this girl did either, to be honest…

When you're a lifeguard at the Olympics with the best swimmers in the world…#Division6Bound pic.twitter.com/OfO0QQZV0i

When the Olympic swimming pool looked a gross looking green colour, of course, this was a perfect opportunity for someone to photoshop Slimer from Ghostbusters!

Product placement at its finest.

With some awesome photoshop skills too..

Review: ‘Jane Got A Gun’