"I’ve often thought about Incendiary as a sort of Star Wars set in a fantasy landscape."

With pages brimming with, revenge, romance, betrayal and magic, Incendiary, a new YA fantasy from Zoraida Córdova, takes readers on a journey to the Kingdom of Puerto Leones that’s action packed from the first page until the last.

We had the opportunity to chat with Zoraida all about Incendiary, book one in the Hollow Crown duology, and even got a small insight into what to expect from book two.

How would you entice a reader who may not yet be familiar with the (brilliant!!) plot of Incendiary to pick up a copy?

Incendiary is a fantasy novel about a girl with the power to steal memories, who returns to the place of her childhood prison in order to find a weapon created to destroy her people. It’s got romance, political intrigue, and a heroine who will stop at nothing to get her revenge.

How and where did the inspiration for Incendiary come from?

When I started working on Incendiary, I was instantly drawn by the idea of a magical group of people struggling for survival. I’ve often thought about Incendiary as a sort of Star Wars set in a fantasy landscape. I’m not sure if it’s because I’ve written for Star Wars or because it’s so embedded into my subconscious. But it’s all there: A group of rebels fighting against a ruthless ruler? An agent of that leader who is tasked with destroying these rebels, but could actually be turned? Of course, the setting is inspired by historic Spain. Reading about that time period was very frustrating and painful at times because there are some things in the texts, like Daily Life in Spain in the Golden Age by Marcelin Defourneaux that made it clear how cyclical hate is. That alone felt very timely.

What is it about writing fantasy for young adults you love so much?

I think kids and teens are resilient. They’re open to the world and when they love something, they love it fiercely. I’ve been reading YA books since I was a teen, which is also when I started writing. At some point, I got older, but my characters remained the same because I wasn’t finished exploring the world through that POV

The powers/abilities the Moria have in Incendiary are pretty epic. How did you decide which power to give each character?

I wanted every power to be represented within each rebel unit. Illusionári can create illusions. Ventári can read your thoughts. Robári steal memories. Persuári compel and manipulate emotion. Each magical ability can be strengthened by wearing corresponding metals like gold, silver, bronze, and platinum. I created the characters first and then decided what power they would have and how wielding that specific power altered the personality I had in mind.

If you were to wake up tomorrow with a Moria power, what would you want it to be and why?

If I could be any of the Moria, I think I would be a Robári! Having the ability to remove some of my own memories? Yes, please. Although, I would use my power for the greater good… Though isn’t that how all villain stories begin?

Throughout your writing career, you have created many utterly captivating worlds. Can you tell us a little about your process of creating a new, fantastical civilisation and world from scratch?

I actually teach workshops on this, so I wouldn’t be able to answer it without going into great detail. The short version is: I use the theory of the cultural iceberg to shape my magical and fantastical civilizations. I don’t think that you can create something from true scratch because everything has an analog. It can be original, but there will still be real world references. Using the cultural iceberg, I think about what is surface culture (the things we see like clothes, food, music) and what is deep culture (the things like values, religion, politics). I talk about it on my podcast, Deadline City, with my co-host Dhonielle Clayton. March 2020 was our “World Building March” and we break down both out fantasy writing processes. https://deadlinecity.com/2020/03/25/season-2-episode-7-iceberg-inlet/

As well as writing for young adults, you also write for adults. What have you found to be the most significance difference in the way you write for both ages?

I approach all my novels with the same questions: “What am I trying to say?” and “What does my hero/villain want and what are they willing to do to get it?” The difference with my adult romance novels is that the love story is the main plot. In my young adult fiction, my heroes are searching for self and identity.

Do you have any advice for young aspiring authors wanting to try their hand at writing YA fantasy?

Read non-fiction. Books about ancient civilizations, science, sociology, weaponry, politics, biographies. Your made-up world should be as tangible as ours.

Incendiary has such a wonderful but varied cast of characters in terms of personalities, goals etc. Did you have a favourite character to create and were there any characters who didn’t make the final cut?

Side characters are always cut, but I never feel too bad about it. As for favorite characters. I love Leo, Renata’s attendant. He’s so bright and bright levity to every scene he’s in. I love the Prince, as terrible as he is. But mostly, I love Ren. Her story is the toughest one I’ve ever tried to tackle. She has suffered so much, and she spends most of her young adulthood feeling guilt over things she couldn’t control as a kid. She was a weapon and she’s still a weapon. In the context of Puerto Leones, this fantasy kingdom, what does it mean when her whole being is suspect? When her own people distrust her? How long must she atone for? Should a child have to atone for the things they did, while under manipulation? It’s all so difficult to answer. Ren’s mind is so dark, and a lot of my other books have so much comic-relief, so this was definitely a challenge for me! But I loved the girl Ren is and the one that she chooses to become.

Incendiary finished on an epic cliff-hanger (I literally squealed!) Without any book one spoilers, can you give us any hints as to what we can expect from book two?

I’m extremely happy to hear that. I can definitely say that I’m having the best time writing the sequel. It has a lot of betrayal and a lot more kissing! 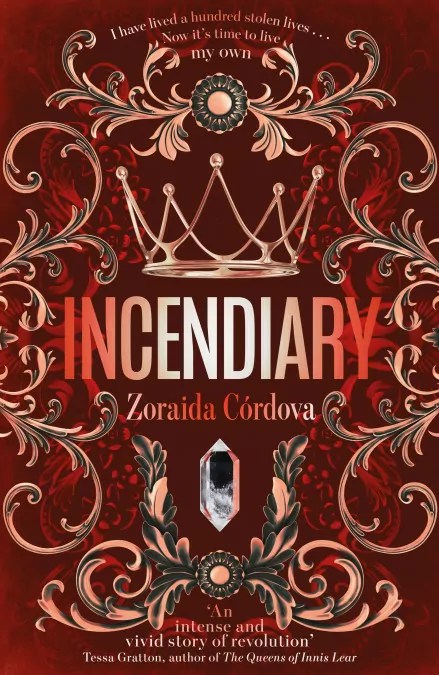 7 artist tours we want to see on Netflix this year